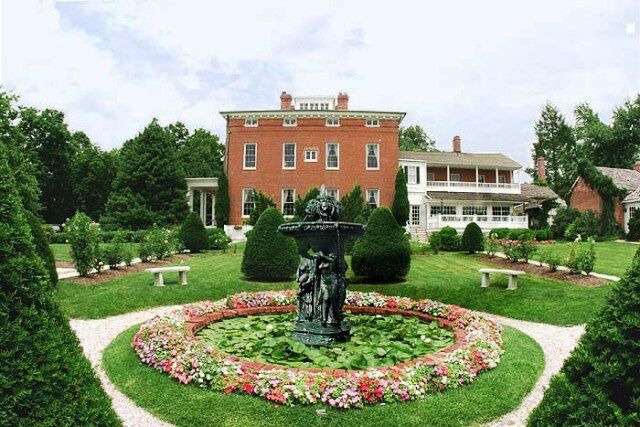 Historic Hotels of America is the official program of the National Trust for Historic Preservation for recognizing and celebrating the finest Historic Hotels. Historic Hotels Worldwide promotes heritage and cultural travel by featuring a prestigious collection of historic treasures including historic hotels and other historic lodging spanning more than 10 centuries across the globe.

Historic Hotels of America is proud to honor the following historic hotels:

Hotel fun fact: Since 1771, the Inn has been the hub for esteemed visitors, such as George Washington, Benjamin Franklin, and General Lafayette to present day travelers.

Hotel fun fact: Antrim 1844 has close ties with Gettysburg, as General Meade stayed on this historic property on the night of June 30, 1863, during the American Civil War. He had been the Commander, Army of the Potomac, for only two days prior to The Battle of Gettysburg. General Meade went on to defeat Robert E. Lee at Gettysburg and earned notoriety as one of the most important commanders of the Civil War.

Hotel fun fact: Hotel del Coronado, Curio Collection by Hilton has three original elevators that are still in service, including birdcage elevator Otis #61 which is staffed by uniformed elevator operators.

Hotel fun fact: The Lodge is the former US Army post’s Montgomery Street Barracks, built between 1895-1897. Many of the guestrooms feature views of either the Golden Gate Bridge, the forest, or the San Francisco Bay.

Hotel fun fact: In 1924, The Seattle Times held a contest offering $50 for the best name. 3,906 entries were submitted and 11 entries included one name, The Olympic, which was selected.

Hotel fun fact: In the early 1800s, the site was one of Washington’s most prestigious hotels and was home to President Andrew Johnson as well as Woodrow Wilson before his inauguration.

Hotel fun fact: This hotel originally opened in 1936 and the exterior retains the original art deco façade and historic lobby.

Hotel fun fact: The Graham Georgetown is rumored to have been a regular haunt of Frank Sinatra, who enjoyed a particular suite that boasts an oversized deck.

Hotel fun fact: This historic hotel occupies a medieval village about 12 kilometers from the city of Siena, a UNESCO World Heritage Site and dates back to the time of the Barbarians in Italy.

Hotel fun fact: The original location of the hotel dates back to the Roman times. The name ‘Quar’ is symbolic of the four Roman miles from the city centre of Verona.Villa del Quar is a National Monument of Italy, known as Castellon Scaligero.

Hotel fun fact: The Bekkjarvik Gjestgiveri is part of the Johannessen family story. Asta and Øystein Johannessen have owned and operated this historic hotel for 34 years, and their twin sons Ørjan and Arnt are the Chef and Kitchen Manager of the hotel’s restaurant. Ørjan and Arnt share their parents’ interest in the family business, which will ensure that the doors to this hotel are open for future generations.

Hotel fun fact: The lobby of this historic hotel features a unique grand staircase built in the early eighteenth century by Daniel Marot, the architect for Louis XIV, who introduced the French monarch’s style to the Netherlands.

Hotel fun fact: Located on the Norwegian Rivera, Det Lille Hotel has been awarded the Olavsrosa, St. Olaf’s Rose, seal of quality by the Norsk Kulturarv/Norwegian Heritage organization, which recognizes institutions that offer high quality experiences centered around Norwegian cultural history. The namesake of the award is a figure from Norse mythology.

Hotel fun fact: The location on which Edgbaston Park Hotel & Conference Centre sits was once a medieval manor house which was burned down entirely in the Revolution of 1688 and then rebuilt in 1718.

Hotel fun fact: The boardroom of The Trafalgar Hotel St. James London was featured in the classic British spy films Dr. No (1962) and The Ipcress File (1965)

Hotel fun fact: The origin of the Oatlands Park Hotel hails back to a luxurious palace that King Henry VIII of England built during the late 1530s for his fourth wife, Anne of Cleves. James I and his wife, Queen Anne of Denmark, founded a royal silk worm farm at Oatlands, called “The Kings Silk Works.”

Hotel fun fact: Originally constructed as a Scottish Mansion, this hotel is located in Dundee, which has been called one of Europe’s most creative cities and the United Kingdom’s first designated UNESCO City of Design.

Hotel fun fact: The hotel opened as a Victorian health spa resort known as the Dunblane Hydropathic Establishment, and over 200 guests attended the grand opening ball in 1878. The resort was designed by renowned Scottish architects Peddie and Kinnear and cost £60,000 to build.

Hotel fun fact: Located in a neo-Gothic building, this historic hotel is the largest hotel in Venice and one of the most magnificent hotels in the city.

Hotel fun fact: The founder of this historic hotel, Marius Michel Pasha, Comte de Pierredon was a French architect who led the Ottoman Lighthouse Authority and the modernization of the Istanbul harbor, which earned him the honorary title of Pasha from Sultan Abdülaziz.

Hotel fun fact: The grand Victorian building, which dates back to 1898, was once one of Edinburgh’s premier haberdasheries and department stores.

Hotel fun fact: The red sandstone used in this historic hotel’s façade was delivered via the Caledonian Railway from the Locharbriggs and Corncockle quarries in Dumfriesshire.

Hotel fun fact: The Grand Hotel & Spa was built originally as a place of business for the North Eastern Railway Company. Each of the guestrooms were once an office of the company and guests may notice the original office numbers that remain above the doors.

Hotel fun fact: The founder of this historic hotel was the richest passenger aboard the Titanic, and when the unsinkable ship sank, Astor was among the more than 1,500 passengers and crew members who perished.

Hotel fun fact: Scenes from the 1958 film “A Night to Remember” about the final night of the RMS Titanic were shot in the Palm Court of The Waldorf Hotel, as director Roy Ward Baker thought that the Palm Court looked like the interior of a grand ocean liner.

Hotel fun fact: Bar 1910, named after the year of the hotel’s founding, is a historic bar that was designed with the Art Deco flair of the 1920s, and is located in an originally furnished setting. The bar is well known throughout Germany from the days of the Hotel Reichshof, as it is the preferred bar for actors and musicians from the nearby Deutsches Schauspielhaus, Germany’s largest theater.

Hotel fun fact: Originally, this hotel was offices for Norwegian American Line and responsible for ferrying Norwegians across the Atlantic Ocean to the land of opportunity.

Hotel fun fact: Aleph Rome Hotel, Curio Collection by Hilton is located just off Via Veneto, which acquired international fame as the center of “the sweet life” in Rome, and was immortalized on film in La Dolce Vita by famous Italian director Federico Fellini in 1960.

Hotel fun fact: Gran Hotel Montesol Ibiza was the first hotel established on the island and is located in the heart of the city, near UNESCO World Heritage Site, Dalt Vila.

"Many of these legendary historic hotels were built for another purpose such as a former castle, palace, national bank, original corporate headquarters, army post officers housing, manor house, and even a former department store from the 19th century," said Lawrence Horwitz, Executive Director, Historic Hotels of America and Historic Hotels Worldwide. "These iconic historic hotels demonstrate the tremendous stewardship of their owners, leadership, and employees in preserving these wonderful historic treasures and the many centuries of stories of the people that previously lived, worked, socialized, or visited. Many are tremendous architectural and heritage landmarks. There is much to discover, explore, experience, and taste in and near these wonderful historic hotels.”

Washington DC based Historic Hotels Worldwide® is a prestigious collection of historic treasures, including historic  hotels, castles, chateaus, palaces, academies, haciendas, villas, monasteries, and other historic lodging spanning more than ten centuries. Historic Hotels Worldwide recognizes authentic cultural treasures that demonstrate exemplary historic preservation and their inspired architecture, cultural traditions, and authentic cuisine. Historic Hotels Worldwide along with Historic Hotels of America are official programs of the National Trust for Historic Preservation (United States of America). HistoricHotelsWorldwide.com allows travelers to book their next getaway from more than 3,000 historic and cultural experiences, and view special offers at participating historic hotels from 30 countries. To be nominated and selected to be featured on this supplemental marketing program website, historical lodging properties must be at least 75 years old; utilize historic accommodations; serve as the former home or be located on the grounds of the former home of famous persons or significant location for an event in history; be located in or within walking distance to a historic district, historically significant landmark, place of historic event, or a historic city center; be recognized by a local preservation organization or national trust; and display historic memorabilia, artwork, photography, and other examples of its historic significance. To be selected in the United States for inclusion in Historic Hotels Worldwide, a hotel must meet the above criteria plus be a member of Historic Hotels of America.  For more information, please visit HistoricHotelsWorldwide.com.