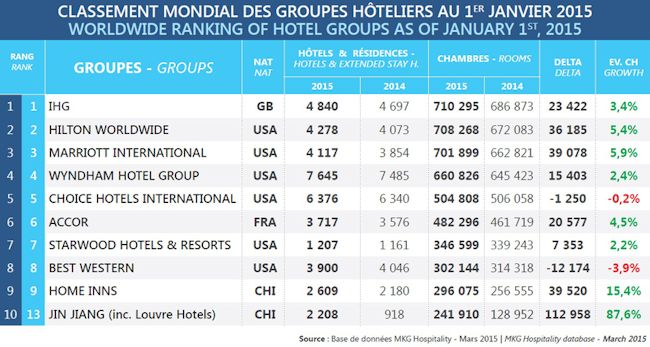 The takeover of the French Operator Louvre Hotels Group by the Chinese group Jin Jiang, announced at the end of 2014 and finalized at the beginning of the year 2015, boosts the Asian group into 10th place in the global ranking of hotel operators with a total of 241,910 rooms operational as of January 1st. Jin Jiang is thus the second Chinese group to join the Top 10, after Home Inns which already ranked 9th last year.

Methodology: Differences with respect to data published by certain groups listed on the Stock Exchange may be explained by the fact that the 2015 ranking is realized on a constant structure basis for all groups mentioned: it only takes into account the accommodations supply at hotels and extended stay hotels that were operational as of January 1st of each year and thus excludes hotels under development and the timeshare supply.

The takeover of the French Operator Louvre Hotels Group by the Chinese group Jin Jiang, announced at the end of 2014 and finalized at the beginning of the year 2015, boosts the Asian group into 10th place in the global ranking of hotel operators with a total of 241,910 rooms operational as of January 1st. Jin Jiang is thus the second Chinese group to join the Top 10, after Home Inns which already ranked 9th last year. This confirms the rise in strength of Asian hotel groups, with which leading western operators are also signing many partnership agreements to develop their supplies.

The group Jin Jiang alone had a supply of more than 146,839 rooms on January 1, 2015, representing year-over-year organic growth by 13.9% with 17,900 additional rooms. The takeover of the French Louvre Hotels Group brought 95,071 additional rooms into its portfolio, allowing the new Sino-French group to climb to 10th place in the global ranking.

American and Asian groups are at arms at the bottom of the ranking as Asian groups have experienced exponential growth. The Chinese group Home Inns, 9th in 2015, posted one of the strongest increases in supply (+15.4%), allowing it to climb to more than 296,000 rooms. This brings it closer to the levels of the supply of the American operator Best Western, which remains in 8th place although its supply shrank by 3.9% in 2014. Waiting by the gates to the Top 10, the Chinese group Huazhu (formerly China Lodging Group) posts growth by 37.3% in one year. With close to 210,000 rooms, it falls into 11th place ahead of another Chinese operator.

The rapidly growing strength of Asian operators that have joined or are on the verge of joining the Top 10 Worldwide nonetheless does not challenge the leadership of the biggest American and European groups. The first three operators worldwide have more than 700,000 rooms each in 2015. The British Intercontinental Hotels Group has more than 710,000 keys further to 3.4% growth in its supply, or 23,422 more rooms including 10,000 in the Greater China region. Further to 5.4% growth in its supply, the American group Hilton continues to close in on the British leader with a total of 708,268 rooms. For Marriott, 3rd in the ranking with 701,899 rooms, the year 2014 was marked by the takeover of the South African operator Protea, growing the group's supply by 112 properties and more than 10,000 rooms. This acquisition allowed the American to double its supply in the Middle East-Africa region, and to increase the number of projects under development in this area.

Wyndham Hotel Group and Starwood Hotels & Resorts, respectively ranking 4th and 7th, posted moderate growth in their supply in the course of the year by +2.4% and +2.2% respectively, while the 5th group Choice Hotels International remains stable. The French group Accor holds on to 6th place in the ranking after increasing its supply by more than 20,500 rooms across the year, mostly through the development of its ibis mega brand that grew by 7%. At the end of 2014, Accor also signed a strategic partnership with the Chinese operator Huazhu, according to which the latter will take on management of operations and development in China of the economy and midscale brands ibis and Mercure. By 2020, this partnership should make it possible to open between 350 and 400 new hotels under Accor brands in China. Hilton also signed an agreement with Plateno Hotels Group (which operates 190,000 rooms) to develop 400 Hampton by Hilton hotels in China.

Georges Panayotis, CEO and founder of the group MKG Hospitality, remarks: "For several years now Chinese hoteliers have grown steadily. But while their development previously focused on their important domestic market, these groups have an increasingly strategic global vision and the overall picture is only just beginning to turn around. The Chinese have a more industrial and capitalistic strategy than the others; they will boost the opening of new hotels and also participate in restructuring the market. Established hotel operators, focused on an asset light approach, have not always invested sufficiently in Capex*. The financial groups that own them may wish to take the profits from their investments at the dawn of the global economic recovery."

* "Capex" are Capital Expenditures, meaning investment spending. "Asset light" refers to the policy of third party ownership of hotels, as hotels operated by hotel groups are mostly under franchise, management or leasing contracts.

The full ranking of the top 150 hotel groups worldwide and the 200 top chains will be published at the end of the first semester 2015. 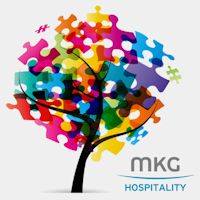 Established in 1985, MKG Group has built a solid reputation for business expertise and know-how in the fields of tourism, lodging and hospitality services. MKG Group provides decision-making support via industry trend and analytical reports, together with highly specialised consulting practices. E-mail us at [email protected]

MKG Hospitality is a global leader in tourism, hotel and catering consulting, with the largest industry performance database in the EMEA region, representing all segments from budget to upscale hotels. MKG's customised database, HotelCompSet, contains a sample of over 200 brands and 11,000 corporate chain hotels, representing more than one million rooms. HotelCompSet provides daily, monthly and yearly monitoring of hotel indicators and analyses of its sample, used by hoteliers for yield management and financial reporting, as well as by financial institutions, investors and developers for forecasting trends.