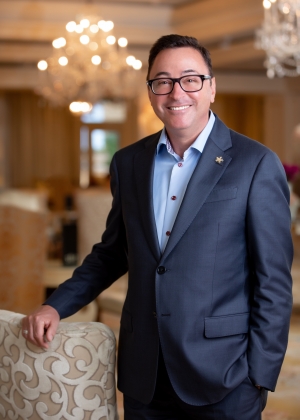 PALM BEACH, July 30, 2019 – Eau Palm Beach Resort & Spa, a Forbes Five-Star, Five Diamond 309-room oceanfront resort situated on seven acres along the Atlantic Ocean on the island of Palm Beach, announces the appointment of Tim Nardi as General Manager. Nardi will be responsible for managing the day-to-day operation of the resort which, along with its 309 guest rooms, includes a world-class Forbes Five-Star 42,000 square foot spa, four food and beverage outlets and 30,000 square feet of meeting and event space.

The ownership group at Eau Palm Beach stated how thrilled they are to have Tim join the team, adding that Tim has been based in South Florida for nearly his entire career and knows the market very well. His keen attention to detail coupled with his deep knowledge of the industry along with his strategic vision will be a key driver for our ongoing success at Eau Palm Beach.

With more than three decades of experience as General Manager at various properties in South Florida, Nardi was most recently Vice President of Hotels for Menin Hospitality where he was responsible for leading the operating performance and growth of the company’s hotel portfolio, which includes Mondrian South Beach, Shelborne South Beach, Bentley South Beach, Gale South Beach, Kaskades Suites at Gale, Sanctuary South Beach and Raffaello Chicago.

Earlier in his career, Nardi held the position of Managing Director of Starwood Capital Group’s 1 Hotel & Homes South Beach where he oversaw the renovation, re-launch and introduction of the resort, which included 426 guest rooms and 163 condominiums. Prior to this, he was also General Manager at Morgans Hotel Group’s Shore Club in Miami Beach and Marriott International’s Eden Roc Renaissance Resort and Spa Miami Beach.

Nardi attended the University of Montana and is a graduate of Cornell University’s Professional Development Program. Nardi recently stated that he is ecstatic about returning to an on-property role where he will have direct contact with guests. One of his greatest pleasures is ensuring the well-being, care and comfort of each and every guest.

When Nardi is not working, he enjoys skydiving and has dived nearly 1,700 times from a variety of aircraft – from helicopters to 727s.