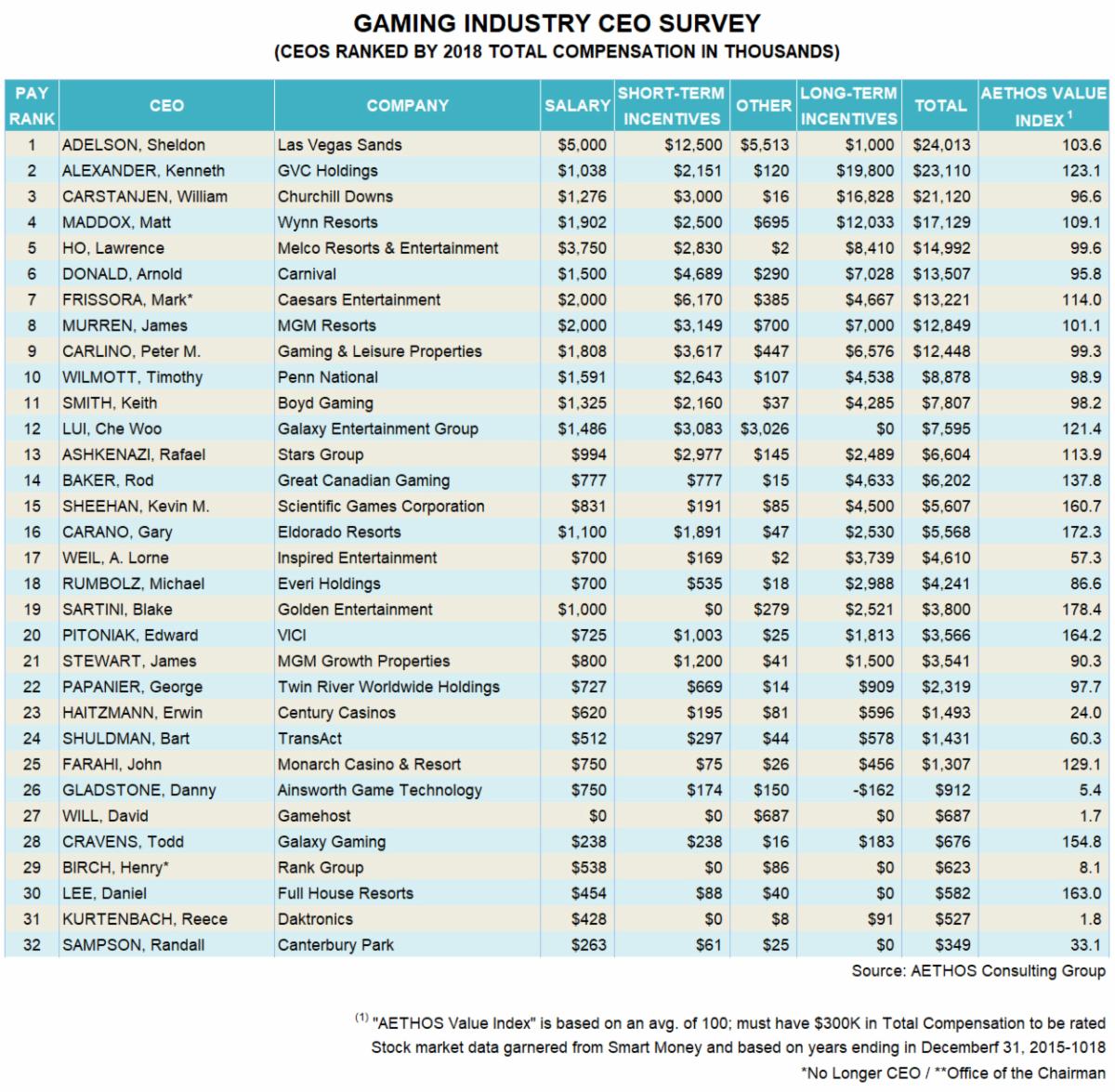 (November 6, 2019) – As the list of public gaming CEOs continues to shrink due to consolidation and the growing competition of technology-based options, “gaming” in its broadest sense will force any entertainment organization to consider a multi-segment strategy (think the NFL, FanDuel, DraftKings, and Jay-Z). The casino industry will be no different, as younger adults focus on their mobile device and skills-based gambling. Thus, the annual AETHOS list of public gaming CEOs has dropped to its lowest level since 2002, when AETHOS started to track their pay. Today, only 12 CEOs run traditional casino operations.

Several key findings of the AETHOS Survey of Gaming CEO pay include:

•  Size, in the form of market capitalization, tends to dictate CEO pay. The larger companies pay more significant dollars. Sheldon Adelson at Las Vegas Sands was the highest paid CEO in the industry at just over $24 million in total compensation. He also runs the most valuable gaming company at a market cap of over $50 billion. Ken Alexander at GVC followed with a $23 million package. Alexander received a bit a grief from shareholders and pundits, and in response took a $200,000 cut in salary. William Carstanjen at Churchill Downs followed with a $17 million paycheck in 2018.

•  In total, 26 of the 32 CEOs earned more than $1 million in total compensation. The average CEO paycheck stayed flat from the previous year at $7.2 million. A relatively new crowd arrived on the best CEO list on a pay-for-performance basis, plus Dan Lee, CEO at Full House who has been a top performer for the past three years. Blake Sartini of Golden Entertainment and Gary Carano at Eldorado were closely aligned for the top spot in AETHOS’s survey. Other top performers included Ed Pitoniak and Kevin Sheehan, relative newcomers to the industry.

•  Only nine CEOs in the gaming industry received a base salary of greater than $1 million, a decline from last year’s 13. Sheldon Adelson and Lawrence Ho had the largest salaries, at $5 million and $3.5 million respectively. The average salary of the group was just over $1.2 million, a slight increase over last year. In the bonus category, Sheldon Adelson led the group with a bonus of $12.5 million followed by Mark Frissora at Caesars with a bonus of over $6 million. The average CEO bonus for the group was $1.8 million, rising another $600,000 from previous year. This has become a significant trend in overall compensation planning for gaming executives. It also speaks to the annual financial performance of the group. Four gaming CEOs received no bonus including Blake Sartini who missed adjusted EBITDA targets in his bonus plan. This was interesting as he was in our top five performing CEOs on a comparative basis. It appears his EBITDA target was an absolute number rather than a relative number.

•  The largest component of CEO compensation continues to be long-term incentive plans (LTIPs). The average LTIP value was $3.8 million, a minor increase from the previous year. Ken Alexander topped this list again with his nearly $20 million stock grant. William Carstanjen followed with a stock grant valued at nearly $17 million. Twenty CEOs received an equity grant worth over $1 million, while only four received nothing at all. Although stock prices of gaming companies experienced drastic drops in the fourth quarter of 2018, there has been a solid rebound in 2019.

•  One of the hot topic issues for compensation committees is that of pay inequality. New regulations require companies to report CEO pay-ratios in their proxies. For example, Arthur Peck the CEO of The Gap, Inc. was identified by USA TODAY as having a pay ratio at 3,566 times the typical employee. Interestingly, two restaurant CEOs and Bob Iger of Disney were in the top 10 executives with unacceptable pay ratios, but there were no gaming CEOs on such a list.

“It is critically important for CEOs and boards to be able to justify these big paychecks to investors and employees,” says Kefgen. “And Pay-for-Performance models such as our AETHOS formula, need to be front and center in articulating that everyone wins big if the CEO wins big.”

With nearly 30 years of experience in hospitality, Keith is a career industry executive. Having graduated from the Cornell University Hotel School, he went on to work at Waldorf=Astoria Hotel before embarking upon a career in hospitality executive search. He was the CEO & founder of HVS Executive Search before joining AETHOS Consulting Group. A frequent lecturer on industry-related issues, Keith has written more than 200 articles on the topics of executive selection, pay-for-performance, corporate governance and executive leadership. His book, The Loneliness of Leadership was published in 2016 and is available on LuLu.com. Keith also produced the Cannes Film Festival award-winning short film, the Power of Advice. Keith can be reached at [email protected]

Hospitality Leadership Series – Future Leaders: Seeking Advice and Applying the Right Filter
Politics to Steer Hospitality Landscape in 2020
Boosting Your Career in 2020: Advice for Up-And-Coming Hospitality Players
Women in C-Suite: Navigating Invisible Obstacles
A Look Ahead – The Lodging Conference 2019
Mobile Technology Trends for 2019 and Beyond
Successfully Recruiting Hotel Executives in the 21st Century
Global Hospitality CEO Survey: What Trends Are Shaping the Hospitality and Leisure Industry?
Redefining Hospitality Leadership: Kerten CEO Marloes Knippenberg on Management Philosophy and Delivering Organisational Success
Board Diversity Within The Lodging Industry – Moving Away From Ordinary Thinking
Hotel CEO Turnover 2018: A Study of the Top 50 Largest Hotel Management Companies
Compensation for US CEOs in Lodging: Fair Pay Is a Real Issue
The Evolution Of Private Clubs
Gaming CEO Pay in a Year of Reckoning
2019 and Lodging Technology: Is There a One-Size-Fits-All Approach?
2019 Insights for Human Capital in Hospitality: Challenges in Finding Labor and Artificial Intelligence Among Trends in the US
Hospitality & Technology – What to Look for When Hiring a CTO
Hospitality Leadership Solutions Series: Embrace Charisma, Not Stoicism
The ‘Hack’ Leaders Should Use in Today’s Quagmire of Ambiguity
Reimagining Sales Leadership With Josh Lesnick, President & CEO, Associated Luxury Hotels