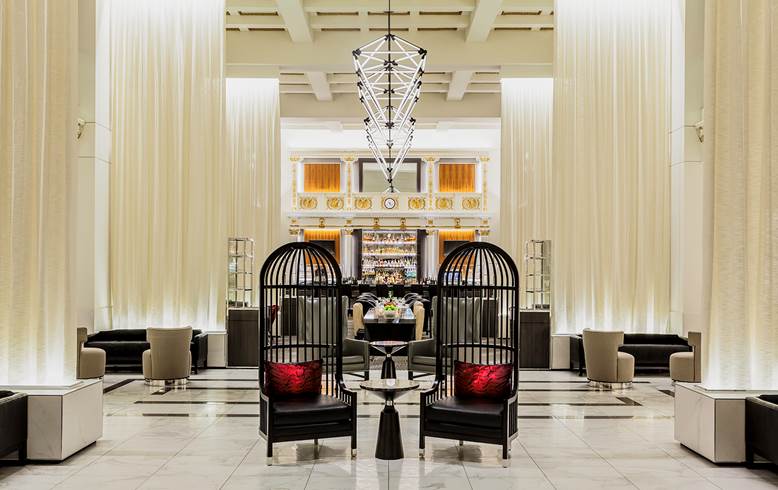 BOSTON, MA (June 25, 2015) – Boston Park Plaza is pleased to unveil the completion of renovation phases one and two of the new Boston Park Plaza located at 50 Park Plaza in Boston. First opening its doors to the general public as the Statler Hotel on March 10, 1927, Boston Park Plaza has served as one of Boston’s and the nation’s iconic hotels for nearly 90 years, playing host to dignitaries like Winston Churchill and President Franklin D. Roosevelt, as well as celebrities such as Katherine Hepburn and Judy Garland.

Situated on the grounds from which British troops embarked for the battle of Lexington, the Boston Park Plaza is in the midst of a $100 million dollar total hotel renovation and restoration project that will solidify the property’s arrival as a convenient, modern and amenity-laden hotel that serves as a destination for tourists, travelers and Bostonians, alike.

Since purchasing the property in 2013, Sunstone Hotel Investors, Inc. has performed a series of renovations to repair and restore all structural elements, which includes replacing the hotel’s roof; repairing the exterior façade; replacing sidewalk surrounds; creating 5,500 square feet of prime retail space; replacing the hotel’s signature two-story decorative windows (scheduled for summer 2015) and the installation of a state-of-the-art HVAC system that provides individual climate control for every guestroom, meeting space and common area.

Beginning late December 2014, the Boston Park Plaza underwent the second of three renewal phases, leading to the complete overhaul of the hotel’s main entrances, lobby, meeting spaces and mezzanine levels designed by Sudbury, MA-based Park Torres Design, Inc. Now, the main lobby area of the property evokes a youthful, innovative and international vibe that complements the hotel’s iconic architectural elements. No longer serving as a simple pass-through for guests, the space functions as a complete multidimensional experience by offering a diverse and customizable selection of seating areas that include options for intimate dining, sipping cocktails in a cozy corner, or closing a business deal.

Located within the renovated lobby area is Off The Common, the Boston Park Plaza’s new restaurant and lounge, offering guests and those passing by a casual, sophisticated and contemporary setting to enjoy lunch, dinner, light bites and hand-crafted libations.

Amplifying the hotel as a true destination are the additions of STRIP by Strega, an all-new 5,700 square foot high-energy steakhouse concept by Boston-based restaurateur Nick Varano, which fuses together the look and feel of a sophisticated, uber-modern steakhouse with that of a sleek, high-end lounge, and a 19,000 square foot state-of-the-art fitness center by DavidBartonGym that includes free access for guests.

Scheduled to begin November 1, 2015 and slated for completion by June 2016, phase three of Boston Park Plaza’s multifaceted renovation will see the total renovation of all guest rooms, suites, bathrooms and corridors, and will include the replacement of all furniture, fixtures and equipment. This final phase of the repositioning will be completed without any disruption to hotel guests.

First opening its doors to the general public as the Statler Hotel on March 10, 1927, for nearly 90 years, Boston Park Plaza has served as one of Boston's and the nation's iconic hotels, playing host to dignitaries like Winston Churchill and President Franklin D. Roosevelt, as well as celebrities such as Katherine Hepburn and Judy Garland. Today, Boston Park Plaza serves as an epicenter for stylish Bostonians and travelers, alike, by offering exceptional concierge and guest services, 1,054 finely-appointed guestrooms, sophisticated dining options such as STRIP by Strega, Boston's only high-energy, uber-modern luxury steakhouse, and Off The Common, the hotel's all-new restaurant and lounge offering a chic, yet casual setting for breakfast, lunch, dinner and hand-crafted libations. Additional guest services include a DavidBartonGym fitness center, FedEx Office Print & Ship Center, and 50,480 square-feet of exceptional meeting space. For more information or to make a reservation, visit www.bostonparkplaza.com or call 1-800-225-2008 to speak to a representative.