Home/Best in Class Versus Best in Industry 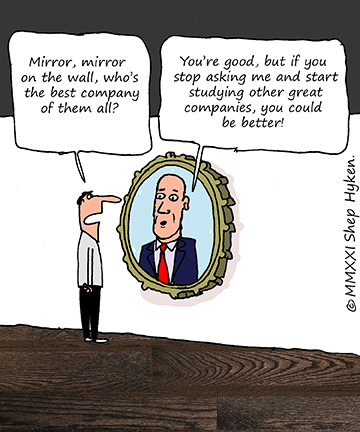 One of my favorite companies to write about is Ace Hardware. I even wrote a book, Amaze Every Customer Every Time, in which I used Ace as the role model example throughout the entire book. It is a perfect example of this concept. First, Ace wanted to be the best of all hardware and home improvement stores. It accomplished that and has received numerous JD Power awards to prove it. But that wasn’t enough!

Other brands have gone down this path. Disney Institute teaches the Disney way in the form of courses on customer service and experience, leadership, and more. The Ritz-Carlton has a team of trainers that companies hire to learn the secrets of creating world-class hospitality and service. Zappos.com has its Delivering Happiness programs. All of these are iconic brands that teach how they do what they do so well.

But you don’t have to be a world-renowned brand to be paid to teach the inside secrets of a company’s success. You most likely haven’t heard of Barry-Wehmiller, a conglomerate of companies, primarily in the manufacturing business. This company has built a reputation for excellence. Bob Chapman, its chairman, and CEO, has a simple formula. Take a great business and a profound care for people and watch great things happen.

Chapman and his team have done such a good job of this that they are in demand to teach others how to do the same. The result is that they are teaching other companies, inside and outside of their industry. They are not only best in industry, but best in class.

You’ve heard the expression, “Think outside the box.” I now want you to think outside your industry. Think about what it takes to be world-class. That’s what the best companies are doing, and you can do it too!

HR Training in the Time of COVID: Commit to a Meaningful Cultural Change
Sense of Arrival Back at the Forefront
Hotels Have a Labor Problem. Is This the Long-Term Solution?
The Secret To Customer Loyalty
Drive Growth With Personalized Experiences for the Post-Pandemic Traveler Using Human Movement Data
Lately, Hotels Seem to Be Falling Short on the People Parts
The Five Best Things to Say to an Angry or Upset Customer
This Is Why You Should Simplify F&B for 2022
Wellness Travel Association’s 2021 Wellness Travel Survey Reveals Future Booking Motivations
Best in Class Versus Best in Industry
Tourism Tidbits: Dealing With Natural Disasters: The Before and The After
The Culture Challenge
What Should Recruiters Check on LinkedIn When Hiring Hospitality Graduates?
Does Your AV Partner Bring Broadcast Thinking, Digital Advances, and Immersive Innovations to Your Hotel’s Meetings and Events?
Virgin Hotels Turns to Virdee to Deploy Self Check-In
Would Customers Pay to Do Business with You?
You’re Terminated: Three Reasons Customers Will Stop Doing Business With You
The Future of Customer Experience Is Human, Meaningful & Transformative
Guest Satisfaction Declines Among Hotels Operated by Largest Third-Party Management Companies, J.D. Power Finds
Going to HITEC 2021? What You Should Know About Travel and Event Cyber Security Risks