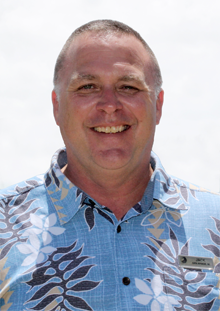 “I am very pleased to welcome Jack to Benchmark and to Turtle Bay Resort,” said Mr. Gibson. “His career credentials are unsurpassed, and we are fortunate to have him lead our facilities management team and join our resort’s executive leadership team. Given Jackie’s previous experience on Oahu, he knows and understands the island, its people and guests well, which will serve Turtle Bay Resort beautifully.”

Jack Johnson was previously chief engineer for General Growth Properties of Honolulu, directing and managing the daily activities of mechanic and engineering staff and maintenance crews for the Ala Moana Center of Honolulu, the world’s largest open-air shopping mall. Prior to this appointment, Mr. Johnson was senior operations & training program manager for the United States Navy, a position that capped his 30-year military career, during which he achieved the distinguished rank of Command Master Chief Petty Officer.