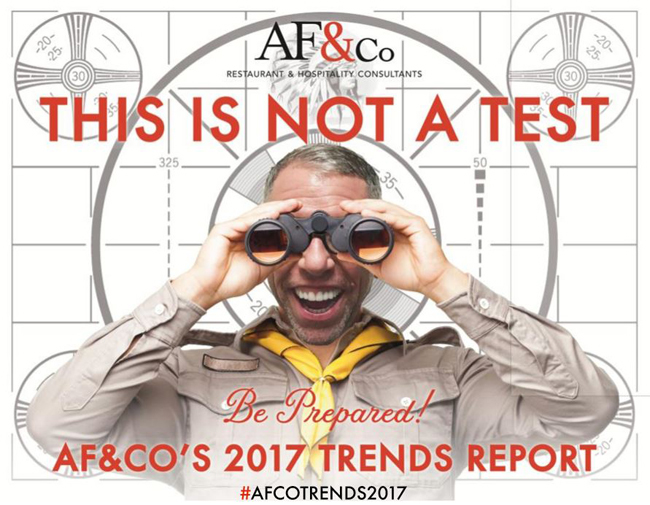 San Francisco, CA (November 16, 2016) –As Andrew Freeman & Co. (AF&Co.) celebrates its 11th Anniversary as one of the country’s leading boutique hospitality and restaurant consulting firms, the team is excited to release the 2017 trends report, Be Prepared – This Is Not A Test – a preview of the hottest trends and predictions that will shape the hospitality industry in 2017. This comprehensive annual report identifies key influences in hospitality marketing, hotels, food and beverage for the coming year.

As we look towards the coming year, the forecast for the restaurant and hotel industry is a little cloudy. Plenty of skepticism, coupled with much confidence and enthusiasm for what lies ahead, are predictors that the industry should prepare for an unpredictable year. However, there are plenty of reasons to remain optimistic as the hospitality field continues to explode with creativity and opportunity. Restaurants and hotels will need to prepare themselves for the unknown and be flexible to meet the increased demands that 2017 will bring.

“2017 promises to be very volatile with many industry reports indicating that there may be slowdowns in travel and dining out in certain categories, “says Andrew Freeman, president of AF&Co. “Add in the results of our most recent presidential election, the rising costs of running restaurants, the staffing shortages, and the tipping debate, and we have quite a year ahead of us. There are also indicators that the year could be very exciting – new hotel and restaurant openings, emerging cuisines and beverages, more technology solutions to simplify business and raise the bar for marketing, and so much more. What does this all mean? That restaurants and hotels need to be prepared, be nimble and be on their game. This year is not a test –its reality and if you are ready, you can emerge as true winners.”

New to this year’s trends report, are AF&Co.’s Trends of the Year. The AF&Co. trendologists dove deep, identifying their predictions for the year in several key categories.

Cuisine of the Year: WE’RE FLIPPING FOR FILIPINO Influenced by a long history of culinary tradition and the flavors of India, Japan, Malay, China, and Spain, Filipino cuisine is bold, fresh, and borderline addictive.

Food City of the Year: TO LIVE & DINE IN L.A. The Los Angeles restaurant scene has been booming (three James Beard awards this year!), but wait till you see what’s in store for the City of Angels.

Up & Coming Food City of the Year: KEEN ON KANSAS CITY It’s no surprise that the tight-knit community is pushing the fold and staying true to tradition in an unparalleled fashion. In KC, an old-school approach is embraced (think butcher shops, pickling, fermenting and Joe’s Kansas City Bar-B-Que) alongside modern techniques.

Please visit http://www.afandco.com/wp-content/uploads/2016/11/AFCo-Trends-2017-FINAL-WEB.pdf?x98850 to further learn about the ‘Trends of the Year’ as well a multitude of trends across all categories, including —

Rot is Hot. Are you ready for the FERMENTATION SENSATION? When you CAN-DO CAVIAR How to handle the SWITCHEL SURGE and when you should JUST CAN IT Why the NO TIPPING MOVEMENT has not reached the TIPPING POINT And why, in 2017, it will be all about VIBE DINING, NATURAL WINE, DRAFT LATTES, BOOZY HOTELS, CAFETERIA-STYLE FAST CASUAL (NOT FAST FOOD) and much more!

Now in its tenth year, AF&Co’s annual trends report has become an industry standard in anticipating market demand and consumer feedback. Compiled from extensive research, the report is intended as a guide to help operators prepare for the coming year.

Be Prepared – This Is Not A Test was developed by the AF&Co. team from a combination of close industry observations, bi-coastal and international travel, discussion with industry leaders, meetings with hotel and restaurant clients, industry conferences, media interactions and thousands of hours spent researching in hotels and restaurants around the country. This year’s AF&Co. staff trendologists, led by agency president Andrew Freeman, were Candace MacDonald, Kyle Osher, Katie Haggart, Julie Albin (DipWSET), Madison Ginnett and Angelo Severino.

Andrew Freeman & Co. is a high-energy hospitality agency with a unique blend of expertise in marketing, publicity and creative services. The AF&Co. team will do whatever it takes to build awareness for clients and ultimately increase sales. AF&Co. offers tailored, flexible programs that include: creative/concept development, branding, recruiting, graphic design, public relations, sales/marketing, training, event management, and more depending on the clients’ needs. The AF&Co. team is creative, direct and fun, and focuses on the areas that they are passionate about: restaurants and beverages, travel and hotels, and lifestyle personalities and products. For more information, visit afandco.com or follow them on Facebook or Twitter.

An industry veteran, prior to opening AF&Co. 11 years ago, Andrew worked at legendary New York venues including Windows on the World, the Russian Tea Room and the Rainbow Room. Eventually Andrew left New York to become the Vice President of Public Relations and Strategic Partnerships for Kimpton Hotels and Restaurants, based in San Francisco. He spent ten years with Kimpton, launching the global brand and over 40 hotels and restaurants. Andrew is currently the head of a dynamic hospitality agency offering full service marketing, public relations and consulting for hotels and restaurants. In the 11 years since opening, the agency has concepted, launched and promoted over 200 hotels and restaurants.