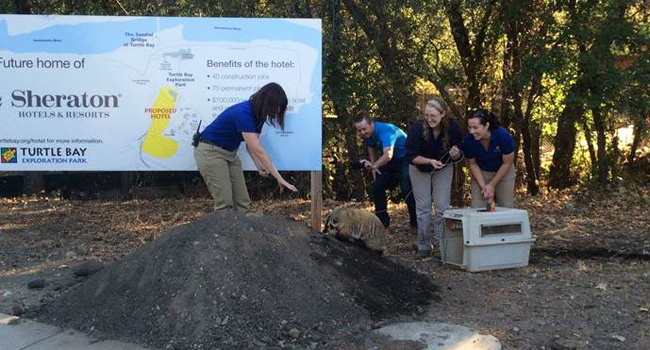 “This is a very unique opportunity to open a property within the Turtle Bay Exploration Park,” said Douglas Leiber, Principal and Chief Operating Officer, Azul Hospitality Group. “The Park is a vibrant gathering place where the community comes together through education, cultural engagement and economic growth. The Sheraton Redding will be positioned perfectly to take full advantage of all the park and community has to offer.”

The groundbreaking was attended by over 200 supporters of Turtle Bay and the future hotel, including Turtle Bay’s Board of Trustees, Board of Regents, Redding Mayor Francie Sullivan as well as the Redding City Council, and many other city and community leaders, along with Digger, an American Badger who is an animal ambassador for the Park. As with all of Turtle Bay’s animals, Digger is a part of the Park because he is not releasable to the wild; he was found along the road in southern Oregon after his mom was hit by a car. He arrived at the park four years ago and has been trained to perform natural behaviors on cue, such as (as his name suggests) digging. He gave his approval for the new project by breaking the first ground.

“Building a LEED certified hotel that will be an asset to the community was of paramount importance,” said Cristy Kidd, Marketing & Public Relations Manager, Turtle Bay Exploration Park. “The Sheraton Redding will allow Turtle Bay to achieve financial independence and sustainability in ways that remain true to our mission and fit into our current site and amenities.”

The hotel will be attached to the Turtle Bay Exploration Park Visitor Center building and will feature a large swimming pool with outdoor Jacuzzi, 4,000 square feet of meeting space including a ballroom opening to the pool/patio area for evening events, and a 1,000 square foot fitness area, all just outside the Paul Bunyan Forest Camp portion of the Park. The Visitor Center building is being converted into a restaurant serving both the hotel and the Park.

Azul Hospitality Group is a premier hospitality company with a robust infrastructure of industry professionals with extensive experience in all aspects of hotel management and development services. Azul’s primary focus is on unique hotels and resorts, with unique destinations and product attributes.