As Spring Break travel volume dipped, the U.S. hotel industry saw weekly occupancy decrease 1.3 percentage points to 65.5% for the week of 20-26 March 2022. As compared with a year ago, average occupancy for the past two weeks combined was nearly eight percentage points higher, while the gap to 2019 was down to five percentage points. Average daily rate (ADR) also softened 1.5% week on week with the absolute level (US$149) the third highest in history. With lower occupancy and ADR, revenue per available room (RevPAR) decreased 3.5% from the week prior.

While the country saw an overall seasonal slowing in occupancy, several markets saw their highest occupancy since the start of the pandemic, including San Francisco (73.9%), Los Angeles (79%), and San Jose (63.4%). San Francisco’s strength this week came in part from the Game Developers Conference, and NCAA March Madness, which all contributed to the city’s highest group demand since early March 2020. The top 10 occupancy markets list continued to be dominated by those in Florida, which accounted for eight of the top 10. Phoenix and Hawaii/Kauai also appeared on that leaderboard. Each market in the top 10 reported weekly occupancy greater than 80%, led again by the Florida Keys (89.9%). In total, 12 markets posted occupancy above 80% with another 32 markets reporting occupancy above 70%.

Occupancy in the Top 25 Markets remained above 70% for a second consecutive week, down 0.9 percentage points from a week prior. Recall, that previous week produced the highest occupancy for the Top 25 Markets since the start of the pandemic. That made last week’s result was the second highest. In each of the past three weeks, Dallas has posted its strongest occupancy of the pandemic-era, including this most recent week with a level of 71.8% (up from 69.9% a week ago). Top 25 group demand was also the highest thus far in the pandemic-era, with group demand at 84% of the comparable 2019 level. Dallas, as well as Boston, saw their highest group demand since the start of the pandemic.

Orlando, the nation’s second largest market based on supply, continued to surprise with weekly occupancy above 80% for the past five weeks. For the most recent week, Orlando’s occupancy fell to 83.5% from its pandemic-era high the week prior (90.5%). Weekend occupancy for the market remained above 90% as it had for the past six weeks. Additionally, Orlando’s weekly group demand for Luxury and Upper Upscale hotels was its highest since early March 2020. Unlike 2020, that weekly group demand saw a larger contribution from weekend groups, but total weekday (Monday-Wednesday) group demand was the highest in Orlando since the pandemic started.

Central Business Districts (CBDs) reached another pandemic-era record as occupancy topped 68%, up 0.8 percentage points from the previous week. Weekday and weekend (Friday & Saturday) occupancy were also at record highs with shoulder days (Sunday & Thursday) at their second highest level, slightly behind the previous week. Dallas CBD (73.2%), Los Angeles CBD (78.8%), Philadelphia CBD (63.3%), and Washington DC CBD (67.8%) all reported their highest occupancies since the start of the pandemic. 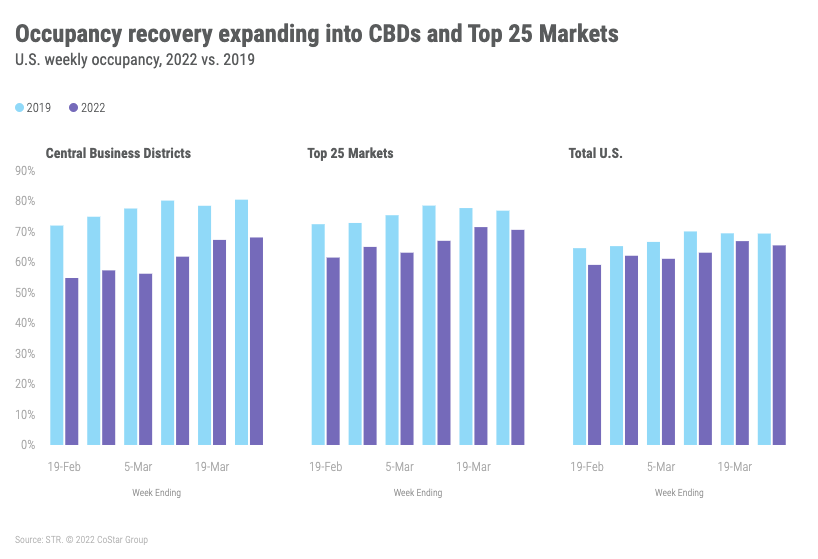 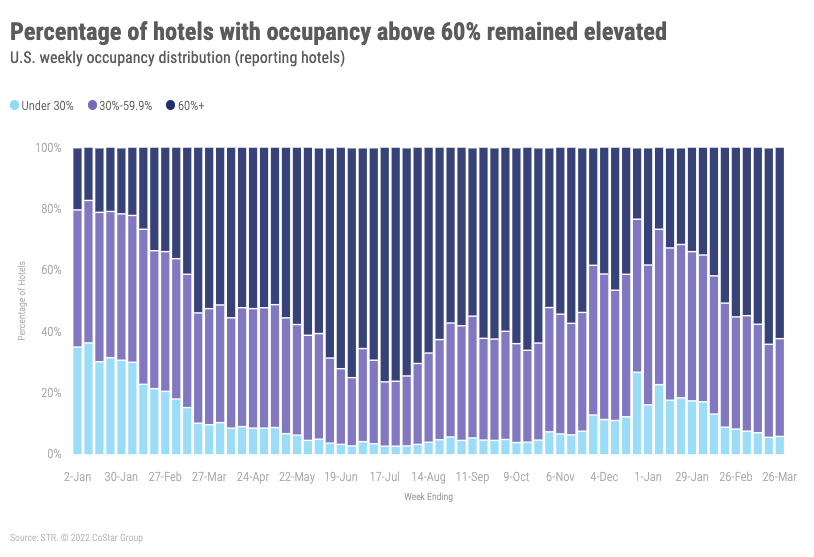 Luxury (70.2%) and upper upscale (67.5%) hotels also set pandemic-era records. This was a second consecutive week of strong occupancy as more than half of all luxury and upper upscale hotels reported occupancy greater than 70% with nearly 30% of properties seeing weekly occupancy of 80% or more.

Although ADR declined from the previous week, the absolute level was 13% higher than the corresponding week in 2019. On an inflation-adjusted basis, ADR was one percent higher than what it was in 2019. Six markets, including San Francisco, Memphis, and Richmond, VA reported their highest ADR since March 2020. Another 17 markets saw their second highest ADR of the pandemic era after most saw their highest ADR a week prior. ADR for the Top 25 Markets was the second best, behind the level seen during the 2021 Christmas holidays, and nine percent higher than in 2019. Of the 10 instances since the start of the pandemic where weekly Top 25 ADR has surpassed 2019 levels, half have occurred in the past six weeks. Weekday CBD ADR (US$209) was the highest it has been since the recovery began and was just barely over 2019’s level. Full week CBD ADR (US$216) was the second best so far. 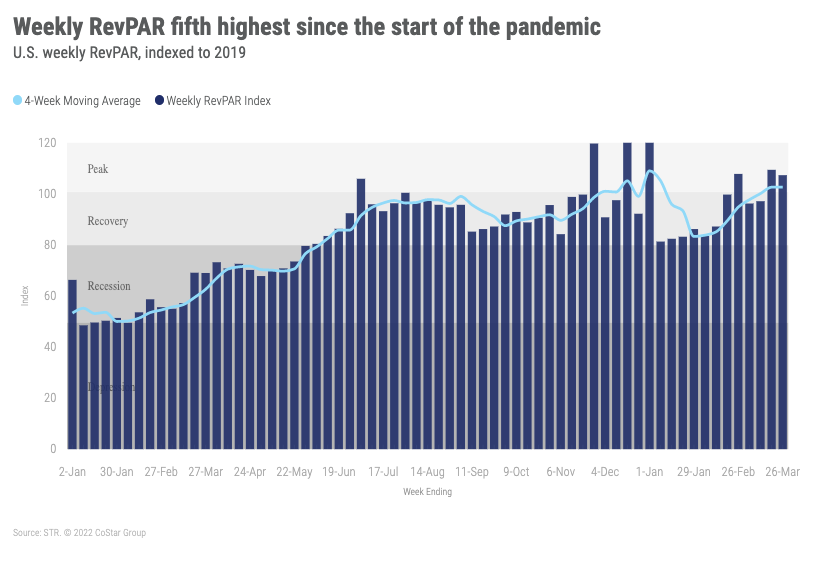 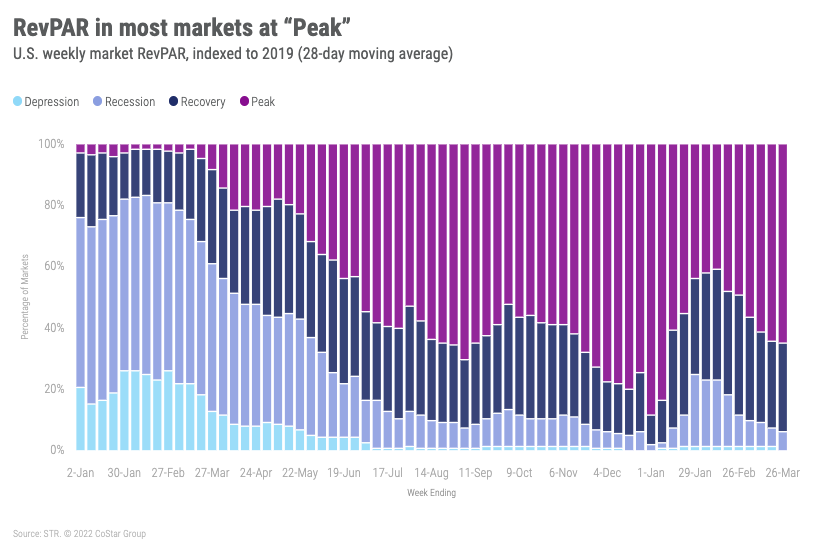 Week over week, occupancy increased 1.5 percentage points to 55.5%. ADR remained relatively flat at US$124, resulting in a 2.9% RevPAR boost. Forty-two of the countries tracked on a weekly basis saw a drop in occupancy from the prior week, including Bahrain, which saw a 14% decrease after a boost in the previous week from Formula 1 racing. Demand in China fell again amid increased pandemic restrictions with occupancy down 36.9%. The United Arab Emirates regained the top spot, achieving the highest weekly occupancy in the world at 88.5%, helped again by the Expo, which will end 31 March 2022. The Middle East (79.4%) had the highest occupancy of any sub-continent with Northeastern Asia with the lowest (39.6%).

Brussels saw robust performance as occupancy and ADR increased by 18.6% and 19.2%, respectively, from the previous. That lift was due to the city hosting the Extraordinary Summit of NATO Heads of State and Government, as well as the resumption of in-person meetings for the European Parliament.

Over the past 28 days, 31% of non-U.S. markets remained in “Recession” with another 12% in “Depression” (RevPAR indexed to 2019 under 50), which was a slight improvement from the previous week. 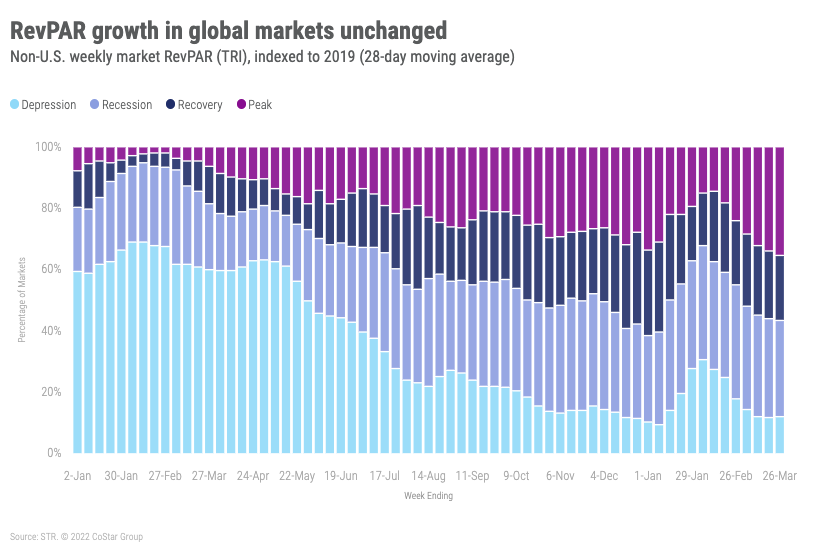 There is much to worry about but also a good number of items to cheer, like the continued recovery of the U.S. Top 25 Markets, CBDs, and Group demand. Challenges remain, but the demand profile of the last seven weeks is encouraging. Given that trend and looking back over the year thus far, we expect U.S. occupancy to remain between 5 and 10 percentage points higher than what it was a year ago. And while the total number of students (K-12 & Colleges) out for Spring Break peaked a week ago, there are still K-12 schools going on break over the next two weeks. We then expect another occupancy burst during the Easter weekend when more than 40% of K-12 schools will be out for a four-day weekend (15-18 April).