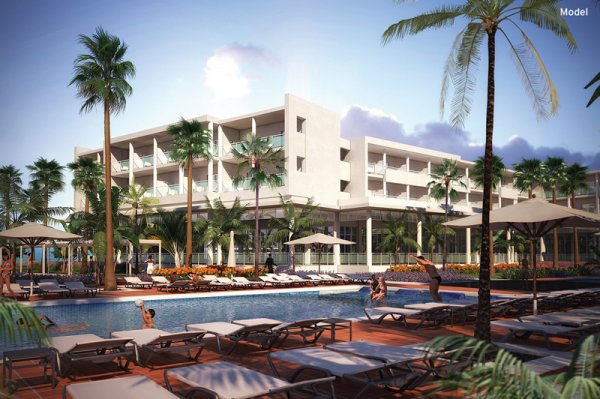 Palma de Majorca, 4th December 2013 – Riu Palace Jamaica will welcome its first customers from 6th December onwards. This small and deluxe hotel comprising 238 rooms will become RIU’s fifth in Jamaica and the first in offering the chain’s exclusive ‘Adults Only’ service in the Caribbean country. Located next to the Riu Montego Bay, in the beautiful Mahoe Bay, this new 24-Hour All Inclusive hotel provides a modern and welcoming design, together with new and deluxe services. Total investment in the project, including land, construction and equipment, reached 43 million dollars (approximately 32 million euro).

Riu Palace Jamaica will be RIU’s most luxurious hotel on the island and the first reserved exclusively for over 18s. Thanks to this and also due to its small size, customers will enjoy a personalised service including great attention to detail. All its rooms are junior suites and Jacuzzi suites and, apart from spectacular views of the Caribbean Sea, they will offer a modern decoration, 42″ flat screen TVs, bathrooms with a shower and hydro-massage bath, free Wi-Fi connection to the Internet and 24-hour room service, among many other services.

The gastronomy of the new hotel will be varied and delicious thanks to its five restaurants: the main “Montego Bay” restaurant with its international cuisine buffet, the Italian “L’Acquedotto”, the Japanese “Zen”, the “Seaside” grill-steakhouse and the modern “Krystal” fusion restaurant. It also has three bars, two swimming pools with chill out areas, a gym, and a conference room, together with free Internet access in all common areas.

The customers of the new Riu Palace Jamaica will be the first to enjoy the new Adults Only Added Values, a package of new services created by RIU for its Riu Palace ‘Adults Only’ hotels. These include: a welcome glass of sparkling wine, concierge service, premium drinks in the rooms and bars, bathrobe in the room, and turn down service every night. Guests may also select different wines from the new special wine menu or reserve a romantic dinner on the beach at an additional cost.

Access to the neighbouring Riu Montego Bay completes the offer, as the guests of Riu Palace Jamaica may enjoy its theatre with live music and shows every night, the Renova Spa, the Sports Bar open 24/7 and the “Pacha” nightclub.

RIU first arrived in Jamaica in 2001, attracted by its exuberant beauty, its reggae culture and the charisma of its people. That year it became the first Spanish hotel chain to invest in this country by opening the Riu Negril hotel. Twelve years later it now offers five hotels at three different destinations giving a total of 2,611 rooms: Riu Negril and Riu Palace Tropical Bay, in Negril; Riu Ocho Rios, in Ocho Rios; and Riu Montego Bay and Riu Palace Jamaica, in Montego Bay.

The international RIU chain was founded in Mallorca by the Riu family in 1953 as a small holiday firm and is still owned by the family's third generation. The company specialises in holiday resorts and 60% of its establishments offer its acclaimed All Inclusive by RIU service. With the inauguration of its first city hotel in 2010, RIU is expanding its range of products with its own line of city hotels called Riu Plaza. RIU Hotels & Resorts now has more than 100 hotels in 16 countries which welcome over 3,3 million guests a year and provide jobs for a total of 25,150 employees. RIU is currently the world's 29th  ranked chain, one of the Caribbean's most popular and the third largest in Spain in terms of revenue and number of rooms.