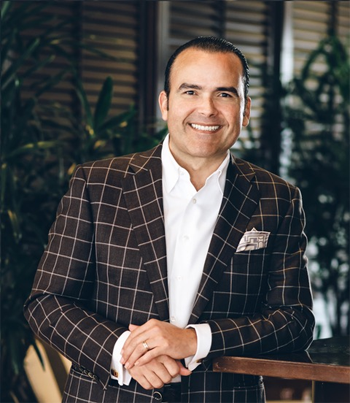 PROVIDENCIALES, TURKS + CAICOS – September 19, 2019 – As Wymara Resort & Villas enters it diamond anniversary year, Jorge Collazo has been tapped to take the reins as Director of Sales and Marketing. A bit of a homecoming for the industry pro who worked with the hotel from 2012-2014, he returns to Turks & Caicos after five years away, largely spent in Miami in various roles and most recently as part of the opening team at the Silversands Grenada.

“I am thrilled to return to Turks and Caicos. The transformation that is underway at Wymara Resort and Villas will have the travel industry abuzz.   From the intense service training our wonderful employees are completing to the new Ocean Front Villas to the reimagined culinary offerings, Wymara is well on its way to becoming, if not already being, the top choice for the discerning modern traveler,” Collazo stated. “It truly is a pleasure to join our General Manager, Mr. Rolf Lippuner, in bringing the resort owners’ vision of an elevated Wymara experience to life.”

In addition to the aforementioned positions, Collazo has held the DOSM role at Canyon Ranch Hotel & Spa and The Setai, both in South Beach, as well as the opening DOSM role at the Condado Vanderbilt Hotel in Puerto Rico. He brings a natural ability to lead, a competitive and determined nature to meet and exceed goals, and more industry insight, know-how and connections than most, to the role.

“Jorge brings more than a decade of experience to us at Wymara, not least of which includes previous time working in the Turks & Caicos,” commented Rolf Lippuner, general manager. “Jorge’s strengths are not simply found is his ability to sell and market, but his experience has also seen a number of years in hotel operations with Four Seasons Hotels & Resorts as a Night Manager, Director of Housekeeping and Director of Revenue. All told, he is incredibly experienced and well-rounded and will help take us to the next level.”

Collazo will oversee the sales, marketing, reservations and revenue management functions for Wymara Resort & Villas. The timing of Collazo’s addition to the team falls in step with the pending completion of the Virtuoso property’s first phase of its luxury four- and five-bedroom villas and he will be an integral part of the launch of Phase II of the villas, which will break ground in 2020 and introduce an additional five units, bringing the total to 12.