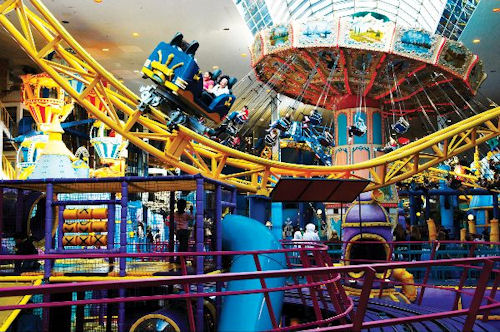 When you think about Six Flags, Sea World or Cedar Fair, it is typically an outdoor experience during summer when kids are out of school. But now, major theme parks and amusement parks are going indoors — where they can attract visitors 365 days a year and not worry about poor weather wiping out profits.

Indoor theme parks are not new, but there is a surge of new development.

The first large-scale indoor amusement park, Galaxyland, built in 1985, was a giant success with 400,000 sf of amusements and thrill rides inside West Edmonton Mall in Alberta, Canada — combined with a 355-room hotel and a 217,000 sf indoor waterpark.

It seems Galaxyland continues to have a lot going for it — satisfying numerous requirements for success.

Galaxyland, ranked 6th largest in the world, was soon followed by Lotte World’s Adventure Indoor Theme Park with 871,000 sf in Seoul, Korea. Then came Adventuredome at the Circus Circus hotel in Las Vegas and Nickelodeon Universe at the Mall of American in Bloomington MN. But now we see the new indoor giants. First World Hotel at Genting Highlands Casino Resort near Kuala Lumpur, Malaysia, has a 500,000 sf indoor theme park. And Ferrari World, now ranked 2nd largest, is an indoor theme park with 925,000 sf under roof that recently opened in Abu Dhabi.

Theme Parks, Amusement Parks, Family Entertainment Centers and Arcades are crossing over, blending and merging together in new facilities that defy categories and labels.

Lodging, recreation and entertainment concepts are merging. Now the indoor entertainment center is attaching itself to a hotel, a waterpark, casino or shopping mall. Many new projects are mixed-use resort developments with a variety of components mixed together in one destination project.

The recent surge in new development is led by two companies, KidZania and Legoland Discovery Centers, that occupy the edutainment space — a new concept that makes learning fun.

While the Themed Entertainment Association (TEA) tracks the major theme parks and the International Association of Amusement Parks & Attractions (IAAPA) has an FEC Council, no one was tracking this newest phenomenon called the Indoor Entertainment Center.

As a result of a recent consulting assignment, JLC Hospitality Consulting of Phoenix-Cave Creek AZ completed an in-depth search and built a database which is rapidly expanding.

To profile the Indoor Entertainment Center Industry, we decided to focus on facilities that were 30,000 sf and larger.

In the course of building this database we tackled the label and definition problems by creating two qualifiers — focus and anchors.

First, what is the focus of the entertainment center? Is it a themed experience, amusements & thrill rides, edutainment, high-tech games, bowling, adventure or sports? Second, is the entertainment center a standalone or is it anchored to demand generators, such as a shopping mall, hotel, casino or waterpark? Where is the indoor entertainment center located? How big are the world’s top indoor entertainment centers? When did indoor entertainment centers open?

When you look at what indoor entertainment centers were built since 2010, you see that almost all the growth is the result of two very successful companies — Legoland Discovery Centers and KidZania. What’s the story with these two companies? Legoland Discovery Centers is an indoor edutainment chain operated by Merlin Entertainments, a division of the Blackstone Group, which also owns SeaWorld Parks & Entertainment and Hilton Hotels Worldwide. The centers, which feature models inspired by the Lego building block toys, are smaller versions of their Legoland theme parks in Carlsbad CA and Cypress Gardens FL. A typical Legoland Discovery Center is 30,000 sf to 35,000 sf in size. The centers feature local landmarks built with Lego bricks. Visitors learn how Lego bricks are manufactured and participate in building classes. The edutainment centers offer a small roller coaster, a fortress, 4-D movies, gift shop, birthday party rooms and a restaurant. The typical center attracts families with children 3-12 years old. In one year, a single center can host from 400,000 to 600,000 visitors. KidZania is the fastest growing chain of edutainment centers in the world.

Founded in 1996 by Xavier Lopez Ancona. He and his partners opened the first center in Santa Fe on the outskirts of Mexico City in 1999. Seven years later, in 2006, after perfecting and expanding the concept, Lopez opened his second KidZania in Monterrey in northern Mexico. Using a franchising model, he expanded to Tokyo, Jakarta, Osaka and Lisbon by 2009.

KidZania allows kids to pretend to be grown up and have fun at the same time. KidZania takes entertainment and learning to a whole new level by combining role playing with real life in a kid-sized environment. KidZania allows kids 4 to 12 to do what comes naturally to them; role-playing by mimicking traditionally adult activities. As in the real world, kids perform adult jobs and get paid for their work. It is a place where they can learn life skills and have fun. KidZania replicates the real world in a safe and contained 80,000 sf kid-sized city, which runs just like a real city, but with kids in charge.

There are typically 60 occupations to try and 75 brands that sponsor storefront establishments and about 100 learning experiences. Kids earn kidzos currency, open bank accounts, manage their money, cash checks and purchase goods and services. It is a place where kids can try out early what they want to be — before they are faced with real life choices.

Hundreds of children wait in line to buy a ticket, typically US$20, to enter a kid-sized city that is built to 3/4th scale inside a shopping mall. The kid-city has a functioning economy with its own kid-currency, called kidzos. Once inside, these children or KidZanians receive a passport, RFID bracelet and 50 kidzos to spend or use to open a bank account which remains open to encourage repeat visits.

When kids run out of money, they learn they have to work. They put on the uniforms of fire fighters, police officers, painters, pizza chefs, bankers, pilots, travel agents, fashion designers, journalists and TV newscasters. They receive assignments to role play with other children to learn about the adult world — like how to direct traffic, solve a crime or fly an airplane. Real world sponsors, such as American Airlines, provide the lesson plan for how to fly a plane.

In 1996, Luis Laresgoiti came to Xavier Lopez Ancona, a Northwestern graduate, with a business plan to construct and operate several day care facilities where children could perform various trades, occupations and professions. The day care idea evolved into Kids City.

A few months later, Xavier Lopez left his vice president position at GE Capital’s private equity group and became an entrepreneur. He formed a partnership with Luis, Esteban Lopez and Francisco Ares. And the KidZania idea was put into motion.

Considering the overwhelming acceptance of KidZania today, it is hard to believe that 15 years ago Xavier Lopez and his partners had trouble getting funding for the idea. Back then, he says, “there were no seed capital investors in Mexico. It was really difficult getting financing for the project.” A recession hit Mexico in 1997 and bank funding dried up.

The first kid’s city opened in Santa Fe on the outskirts of Mexico City in 1999 with a US$7 million investment, where 55% came from participating sponsors, 25% from a bank loan and 20% from partners. The partners never imagined the success they would achieve. “For the first year, they estimated 400,000 visitors and they received 762,000.

The brand KidZania was created almost immediately after consolidating the business in Mexico City with Xavier Lopez Ancona as CEO.

The first center opened in Santa Fe on the outskirts of Mexico City in 1999.

Using a franchising model, he expanded to Tokyo, Jakarta, Osaka and Lisbon by 2009. Franchise licenses are granted to a single exclusive licensee for each country. Upfront capital costs run about US$20 million per location.

The KidZania recently built in Mexico City-Cuicuilco is twice the normal size at 149,800 sf and provides both indoor and outdoor learning experiences — where, for example, kids can drive real electric cars on kid-size highways.

In the period 2014-2017, twenty-three (23) addition KidZania centers are expected to open, including 14 in the USA, which will be company-owned and operated. The first three US locations may be Los Angeles, Chicago and New York; although as of May 2013 no locations have been announced.

Cammie Dunaway joined in 2010 to serve as global marketing director and CEO for KidZania USA, based in San Jose CA. Dunaway is working with CB Richard Ellis to identify US locations. Locations can be 65,000 sf to 80,000 sf and cost from US$35 million to US$45 million to develop. Costs are defrayed by income from corporate sponsors. For more, contact Dunaway at [email protected].

SHOPPING CENTERS ARE A KEY

Shopping centers offer a great location for KidZania for many reasons. First, the investment is lower than if you go buy a piece of land, build a structure and provide for parking. Shopping centers already have a well-known name, a visible address, good infrastructure, access and transportation. And most shopping centers need entertainment.

SPONSORS ARE A KEY

KidZania is a child-size urban environment in which companies such as McDonald’s, Domino’s Pizza, Coca Cola, Walmart and American Airlines pay to open miniature authentic-looking storefronts. For example, there is the nose of an airline jet that sits above a travel agency check-in counter. Sponsors share inside knowledge on how their businesses operate, so KidZania can design a realistic, authentic experience for children.

An airline knows best how to train pilots or run an airport. A bank knows best how to teach children about saving and investing. It is the integration of real-world brands with KidZania staff that enriches the learning experience. KidZania and its sponsors go through an immersive process to make the learning experience interesting and fun. Companies pay millions of dollars to set up shop in KidZania, but there are very strict rules on how they get involved.

Everywhere KidZania goes, they choose local sponsors who know the market and the culture. In Indonesia, for example, kids learn how to run a noodle factory. In Jakarta, kids learn how to grow and market coffee. In Kuala Lumpur, kids learn how to fly an airplane. In Bangkok, you can practice being a deejay on a radio station. In Japan, kids can attend a university where they earn higher kidzos.

KidZania is seeking potential licensees who are committed to fostering the education and success of children. A potential licensee must be locally based in each country where it operates. Candidates must possess the “know-how” necessary to achieve success and have extensive relationships with national and international brands — especially hospitality, entertainment and media.

KidZania is definitely dominating the growth in new edutainment centers. There are more on the horizon for 2016-2017.

So, you want to build an Indoor Entertainment Center? If so, run the comparables, learn the requirements for success and hire an independent consultant to help you determine the market support and economic feasibility.

Jeff Coy, ISHC, is president of JLC Hospitality Consulting based in Phoenix-Cave Creek AZ.  He is certified by the International Society of Hospitality Consultants.   For more about market research, economic feasibility and design-development services for all kinds of resorts, waterparks, adventure parks and sports facilities --- including the new phenomenon of indoor entertainment centers, call 480-488-3382 or email [email protected] or go to www.jeffcoy.com.