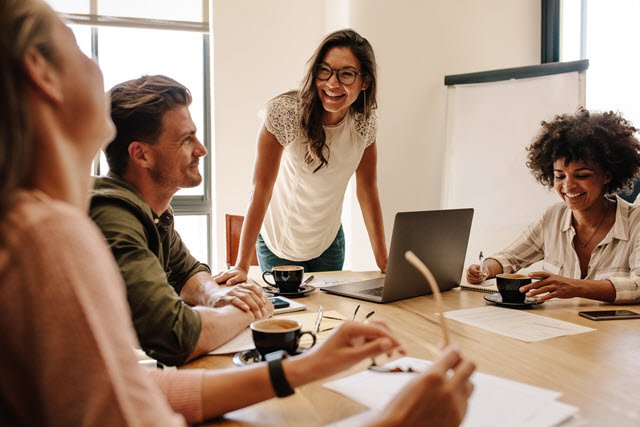 How does a woman do business in a male-dominated context? Three female CEOs share their perspectives on gender-bias for entrepreneurs and how to overcome it.

June 14, 2019, the second Grève de la femme (women’s strike) in Swiss history took place after the first 28 years ago. Over half a million women took to the streets in protest of gender inequality. Unfortunately, the world today still shows a large gap in the appreciation of both genders in the business world and beyond. Currently, 35.3% of entrepreneurs are women (FSO, 2016) and 31% of SMEs are led by women (USAM, 2017) in Switzerland.

With the aim to gain insight into the world of women-led business, EHL’s Entrepreneurship Panel and Women in Leadership joined forces to bring together three exceptional female leaders:

Although Laurence Stoll, Johanna Roussel and Madga Oltean left the corporate world for different reasons to start their businesses, their experiences as entrepreneurial women—in a world still dominated by men—shed light on various areas of common ground.

What does it mean to be a female entrepreneur?

Detecting a business opportunity that speaks to a need in the market should not be subject to gender. Yet, the reality is deeply biased. It might not be detectable at first sight, but small actions, remarks, and their effects accrue over time to make discrimination very real.

Johanna Roussel explained to the audience that every time she had a first meeting with external stakeholders, they addressed her male colleague although she is the CEO of the company and a member of its executive board.

The belief that men are the decision makers still holds. Beyond these socially constructed stereotypes, Laurence Stoll recalled her experience in Japan, where she was practically ignored by her male business partner who was Japanese. This revealed to her the impact of national culture in doing business. Beyond these initial hurdles, our speakers also highlighted the importance of being firm, from the very first encounter throughout the business relationship to gain the respect that would allow them and their companies to build successful business relationships. Yet, this very firmness also implied that it was harder for them to joke – a tool frequently used by their male counterparts to help break the ice!

The reality is culturally-embedded, industry-driven and influenced by stereotypes. – N. Rosenkranz

Biased perceptions and stereotypical behaviors are deeply ingrained just about everywhere. Even the type of question asked by investors, which is significantly associated with the amount of funding acquired, is subject to gender bias (Kanze et al., 2017). While male entrepreneurs are probed with positively-led questions (promotion–oriented), female entrepreneurs are asked negatively-led questions (fail-oriented), such as “what is your plan B” and “do you have a risk assessment”. This is the exact same reason why Laurence Stoll took the difficult decision to start her company without investors. As she said, even if they are crucial, investors can be found along the way.

If I had $10 million to start, I would have burned a lot of it, and not learned from it. You get very creative when you don’t have money. – Laurence Stoll

How does a woman do business in a male-dominated context?

Magda Oltean shared with the audience her belief that the road to your goal will be different from what you imagined as you change and adapt to the environment. Mistakes are common, so learn from them to improve. The learning process never stops. The business challenges continue. And as a woman the biased perceptions and stereotyped behaviors work against you but you need to hold your ground.

So stay positive and turn these challenges into opportunities:

As Laurence Stoll highlighted, if you are the only woman amongst men, stakeholders will remember you. Entrepreneurs fight to gain attention from investors and potential partners. Nevertheless, being remembered is only the first step, as performance and networks matter most; yet, being different (a woman) enhances visibility and can become a competitive advantage.

Even if women are asked more negative-oriented and critical questions than men, you can anticipate these questions by preparing in greater depth…and shine all the brighter for it. Think through how you can use your answers (to negative-oriented questions) to point out the advantages of your business and turn them into a strength that you can vaunt during your pitch and Q&A.

#3. Cutting corners by ‘playing by the book’

Entrepreneurship is all about playing it smart when the odds are stacked against you (male or female). After all, more than 90% of entrepreneurs fail. If the context is not ready, don’t force it. As Laurence Stoll and Johanna Roussel voiced, they are not in the business of educating their audience. If an external stakeholder will only do business with a man, let your male colleague run the meeting. Play it smart and strategically manage the environment if it favors your business. What matters is the success of the company and not your ego. As Johanna Roussel stated jokingly “always have a man with you!” Magda Oltean corroborated this assertion while explaining that some situations call for assertive and corrective behaviors. Concretely, if a male stakeholder makes offensive advances, it is critical to stop these advances right away without feelings of guilt or some naïve belief that the situation will help the business.

#4. When the world gives you lemons

As one learns to grow with the challenges and cope with the hurdles of life, attitude is far more important than skills. If she, as Laurence Stoll recounted, had not been forced to organically grow her company slowly and learn the ropes along the way, she would have very likely burned the capital quite quickly. Reinvesting capital taught her key business lessons that she might not have learned otherwise. As she said, it is important to take something positive away from your experiences with gender inequality and use those lessons learned to improve your business.

For a thriving economy, we need more female founders and CEOs as Laurence Stoll, Johanna Roussel, and Magda Oltean all agreed. In order for this to happen, we need more women to lead businesses that generate value for society, inasmuch as we need more men who are able to embrace and promote change at their work environment.

Dr. Nicole Rosenkranz is an Assistant Professor of Entrepreneurship and Strategic Management. She conducts research on strategic and corporate entrepreneurship in the past years and will be teaching Innovations and New trends in the hospitality industry in the online MBA program of EHL.

Nicole’s research interests lie in examining the importance of organizational and role identities in shaping strategic responses that drive entrepreneurial behavior and ultimately organizational change. She regularly conducts field research studying the processes by which managers and employees innovate or adapt strategies, and how they affect change at the organizational level.

She received her Ph.D. from the University of St.Gallen, and an MBA from the European Business School. She serves as a reviewer to diverse journals, amongst which Organization Science, Academy of Management Review, and the Journal of Management.

Prior to joining EHL she was a senior researcher at ETH Zürich and affiliated faculty at the Wharton Business School, University of Pennsylvania. Nicole brings with her several years of corporate experience both from the fields of finance and consulting.

Dr. Sowon Kim is an Associate Professor of Organizational Behavior. Her professional objective is to help individuals become more effective in their careers while leading balanced lives and help organizations develop diversity and people-centric cultures in order to stay competitive. Dr Kim’s research focuses on personality, networking, careers, work-family, women leaders, and Swiss SMEs in emerging markets. She has published in outlets such as the Journal of Vocational Behavior, Personality and Individual Differences, and Journal of Environmental Psychology. Dr Kim teaches in the undergraduate and graduate programs and launched the WIL (Women in Leadership) Initiative in 2018. Before joining EHL in 2013, Dr Kim pursued her post-doctorate at IESE Business School, obtained her Ph.D. from the University of Geneva, and was a Visiting Scholar at INSEAD Fontainebleau. Of Korean nationality, Dr Kim speaks four languages and lived in eight countries before settling in Martigny (VS, Switzerland) with her family.

An Introduction to Service Design
What Is a POS System?
2021 Top Hospitality Industry Trends
Technology at the Service of the Customer
Drinks Trends: 7 Festive Beverages to Discover From Around the World
11 Examples of CSR Practices in the Hospitality Industry
Mind the Generation Gap! Generational Differences in Hospitality
Why There Is Hope Amid the Despair for the Hospitality Industry
How Has the Hotel Development Scene Evolved?
The Relationship Between the Stringency of COVID Lockdown Measures and GDP
Hotel Industry Performance: EHL’s Pulse-Taker Reveals 5 Pain Points
EHL Launches European Hotel Transaction Price Index
The Future of Innovation in Hospitality: Current Best Practices, Key Success Factors and Main Challenges
To Pay or Not to Pay: When Dividend Policy Rhymes With Business Strategy
Chain Affiliation Is on the Rise but Which Hotels Will Rebrand?
Beyond COVID-19: Leadership Skills Fit for the Future
IDeaS Announces Fabian Specht Future Revenue Innovator Scholarship With EHL
How to Launch a Hospitality Business in an Economic Downturn
European Hotel Investment Market: H1 2020
Introducing HospitalityVIEW, The Innovation Working Group of Global Hotel Industry Executives