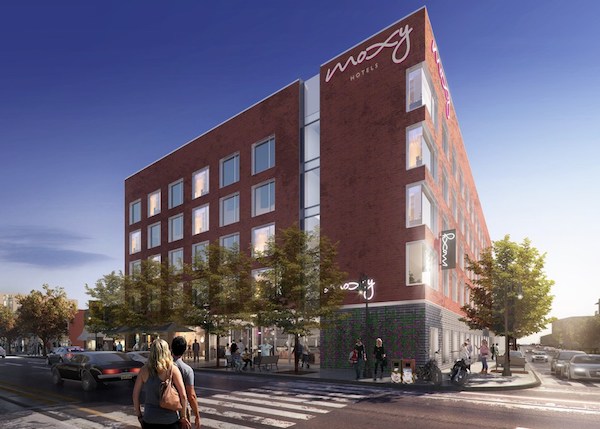 MERRILLVILLE, Ind., June 20, 2019 – White Lodging today announced its third Moxy Hotel, which officially broke ground and is on schedule to shake up the traditional hospitality experience for travelers in late 2020. The 162-room Moxy Austin is located alongside the University of Texas at Austin campus at the intersection of Guadalupe and West 26th streets, and will feature stylish, locally inspired design at an affordable price point.

With thoughtful, tech-enabled bedrooms, interactive gathering spaces and approachable service, Moxy boldly reinvents the traditional hotel stay and aims to surprise travelers with a playful, spirited and fun guest experience. Designed for the young and the young at heart, Moxy gives its guests everything they want and nothing they don’t, so that they save on space and can splurge on experiences. The brand’s style features an industrial chic look and aesthetic of polished concrete floors, exposed concrete columns, and open ceilings.

The communal space on the ground floor of Moxy Austin hotel will serve as the hub for the hotel, giving guests exciting ways to work hard and prioritize play. The shared spaces will include White Lodging’s food-truck inspired 24-hour taco concept, Zombie Taco, and pick-up bites in the lobby, game tables in the public space, and an interactive digital guestbook which streams Instagram images and videos from Moxy guests around the globe. The Moxy Austin experience will begin at Bar Moxy, which doubles as the hotel’s physical check-in and will be complete with a complimentary ‘Got Moxy’ cocktail upon arrival. Moxy Austin will also feature an open-air patio complete with lounge seating and fire pits.

Zombie Taco will serve tacos, healthy bowls, burritos, and other fresh, made-to-order items for breakfast, lunch, dinner and late night. This will be the concept’s third location after opening to rave reviews and national recognition in Chicago in 2018.

“It’s not easy to emulate Austin’s unique vibe and free spirit culture, but Moxy Austin is designed to do just that,” said Deno Yiankes, president and CEO, investments and development at White Lodging, the hotel’s owner, developer and operator. “Moxy is distinctly different than what this area of Austin has to offer and we are anxious to showcase this concept to those visiting the campus district.”

White Lodging currently operates Moxy Chicago, which earned Marriott’s Opening of the Year award for 2018, and is in the process of opening Moxy Louisville Downtown this fall.

White Lodging Loves Austin
White Lodging currently owns and/or operates 12 other hotels and eight restaurants or bars in the Austin market. It’s also developing the 613-room Austin Marriott Downtown; The Otis Hotel, part of Marriott’s Autograph Collection; and AC Hotel in Austin’s campus district. The Otis and AC Hotel are scheduled to open in fall of this year, and the Marriott is scheduled to open in summer 2020.

White Lodging, established in 1985, is one of the leading ownership, development, and management companies in America. An innovative trendsetter, the organization's portfolio includes convention, urban lifestyle, and suburban select hotels with more than $1 billion in managed revenue. White Lodging operates more than 90-premium hotels, 30 restaurants and 30 brands in 20 states. Success knows no boundaries at White Lodging, where associates and leadership have consistently earned superior guest satisfaction scores, top market share and industry-leading profit margins while recruiting the best, brightest, and most passionate professionals in every discipline for three decades. White Lodging is a proud winner of the Gallup Great Workplace Award. For more information about White Lodging, visit www.whitelodging.com, or connect on Facebook, Twitter, LinkedIn and Instagram.

Moxy Hotels is Marriott International's new millennial-focused brand that debuted in September 2014 with the opening of the Moxy Milan. A boutique-hotel concept for the next-Gen traveler, Moxy is a fresh and innovative brand combining stylish design and approachable service at an affordable price point. With tech-enabled rooms, vibrant lobby spaces and warm, modern service, Moxy aims to surprise travelers with a thoughtful, spirited and fun guest experience. Moxy Hotels is proud to participate in Marriott Bonvoy, the new name of Marriott's travel program replacing Marriott Rewards®, The Ritz- Carlton Rewards®, and Starwood Preferred Guest® (SPG). The program offers members an extraordinary portfolio of global brands, experiences on Marriott Bonvoy Moments and unparalleled benefits including earning points toward free hotel stays and nights toward Elite status recognition. To enroll for free or for more information about the program, visit https://www.marriott.com/loyalty.mi. To learn more about Moxy Hotels, visit www.MoxyHotels.com.

Marriott International, Inc. is based in Bethesda, Maryland, USA, and encompasses a portfolio of more than 7,000 properties in 30 leading hotel brands spanning 131 countries and territories. Marriott operates and franchises hotels and licenses vacation ownership resorts all around the world. The company now offers one travel program, Marriott Bonvoy™, replacing Marriott Rewards®, The Ritz-Carlton Rewards®, and Starwood Preferred Guest®(SPG). For more information, please visit our website at www.marriott.com, and for the latest company news, visit www.marriottnewscenter.com. In addition, connect with us on Facebook and @MarriottIntl on Twitter and Instagram.