When Less is More in Hotel Design

When Less is More in Hotel Design 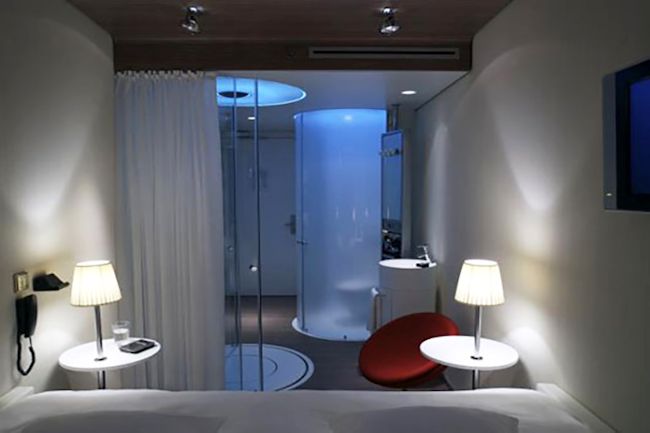 Wardrobes, trouser presses and fruit bowls have long been among the hallmarks of hotel bedrooms – but their days are numbered in many major mid-range chains.

Next time you stay in a hotel look at the length of the mirror in your bedroom. If it is reaches from ceiling to floor, the chances are that you staying in a luxury establishment or, if not, that the brand has not gone through a recent re-think to maximize efficiency.

“Tall mirrors are a housekeeper’s nightmare,” says Richard Harris, Head of JLL Capital Work Services in EMEA, part of the Hotels & Hospitality Group.” They have to be cleaned every day and create health and safety issues. Also there aren’t that many people in the world who are 7′ 6″ and need long mirrors.’

Leading hotel brands in the world are reappraising the components of their bedrooms – everything from mirrors, baths, chests of drawers and wardrobes down to chocolates on pillows – to see what matters most to current generations of customers and also to find changes that can be made to reduce running and maintenance costs.

“If you can knock even a few minutes off the cleaning time per room in a 500-room hotel, for instance, it has an amazing impact on the bottom line,” says Harris.

The minimalist but functional design approach is likely to affect most of the three and four star market around the world – or about 80 per cent of the sector, Harris says. The luxury market is different – expectations are more traditional and the guests are more wedded to the ‘extras’ that they have always had.

Already, some big name chains are rolling out their new look room design. Moxy Hotels, for example, has found that “most people never use their closets“. So the brand – launched by Marriott in Milan two years ago – is now putting more emphasis on a “sweet 42″ TV and an even sweeter bed” as it opens up around the world, replacing wardrobes with hooks on the wall.

By late 2017, Moxy expects to have 33 hotels in Europe, the U.S. and Asia – all using this leaner approach. “We had some of the best design teams find out what people love most, or could live without at a hotel,” explains the management.

Best Western’s new Vib (as in ‘vibrant’) brand is similar – using hooks rather than closets, drawers under the bed instead of dressers and bed headboards that double as desks. Emphasizing its “cutting-edge design”, Best Western says: “Since we introduced Vib, we have received tremendous interest from developers around the world.” Tru by Hilton, months away from opening its first (closet-free) hotel, is thinking along the same lines.

The move to more minimalist but functional design is driven by consumer feedback: – with a big emphasis on intelligent use of technology coming from modern – both younger and business travelers in particular. Realizing that they were losing out to Airbnb and – in terms of eateries and coffee sales – to Starbucks and others, the hotels started researching the preferences of their users. They discovered that they had to up their game on the IT side – making sure that rooms have sufficient charging points for the devices that many travelers carry around whether for work or leisure.

But the hotels also found out that the traditional fittings and furnishings are less of a draw for modern guests. Laptop-owners have less need of a desk. On the other hand, people with smartphones and portable technology expect good wifi connections throughout the hotel.

End of an era for fussy fittings

Rethinks about what guests – particularly the millennials – really want also led some mid-range hotels to prioritize showers over baths and hard floor finishes over carpets. Not only do power showers and laminate floorings feel more modern but they also reduce the time taken to clean. Other changes have followed – reducing the number of dust-collecting horizontal surfaces and those mould-friendly bathroom tiles.

The move to simpler, less fussy bedrooms comes with the complementary trend of more expansive communal areas. Tru by Hilton’s lobbies – “comprised of four zones where guests can work, play, lounge and eat” – play to the modern tendency for travelers to spend free time together, rather than alone in their rooms. Moxy promises a “vibrant social scene“.

Future high-tech hotel design will cater for residents who want to socialize. “The need to interact with people is being driven by the advancement of technology,” says Harris. “The fact that you can check in and do everything on your iPhone means that when you have down time you’d rather be in the bar seeing what’s going on than being in your room alone.”

Sustainable Hotels: Learnings from Designing a Carbon-Positive Hotel
3 Ways Smart Interior Design Will Improve Your Hotel Operations
Vacationing in a Tree House? Why Singapore Hotels Are Tapping Into Biophilic Design / Holden Madison
The Hotel Experience Gets High-Tech
Why Hotels Are Taking Wellness Seriously
Why Select Service Hotels Are Coming to the City Center
Why Historic Buildings Make Great Hotels
How Art and Photography Are Positively Impacting Hotel Design
Puerto Rico Lodging Market Poised for Comeback
JLL U.S. Hotel Market Overview
How Hotels Are Meeting the Demand for Quality Meeting Space
Why Lifestyle Hotels Are Not Just for Millennials
Revisiting the Public Ownership of Convention Hotels
How Many Tourists Is Too Many?
How France’s Hotels Are Rethinking Style and Space
Hospitality M&A Focus to Shift to Smaller, Niche Platforms in 2019
How France’s Mountain Hotel Industry Is Exploring New Routes
Why Coworking Is Coming to Hotels
How Hotels Are Upgrading Their Sustainability Efforts
Big Hotel Brands Set Their Sights on Portugal’s Cities