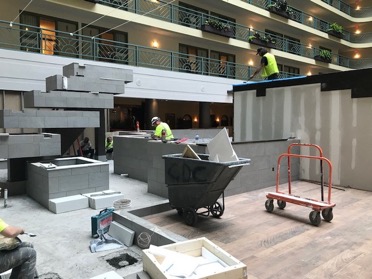 PLAINFIELD, IL, OCTOBER 25, 2018 — A quality renovation is essential to the success of any hotel. Despite this, many hotel owners think that ‘reno’ is a four-letter word. This is a mistake that comes with serious consequences, especially when it comes to selecting a general contractor.

More concerned about cutting costs than a positive outcome, a hotel owner may select a less qualified, inexperienced local contractor rather than an out-of-state "GC" with extensive expertise in hotel renovations and PIP requirements. Local knowledge is a bonus with access to labor and the municipal approval process. On the other side of the ledger, local renovation contractors not familiar with hotels tend to fall behind, causing the schedule to slip, construction costs to rise, and delays to putting rooms back into service. PIP requirements are not met. Or work is shoddy. For those reasons, when reviewing proposals for a major hotel renovation, the lowest bid from a local contractor is rarely the best.

Here are important factors to consider in making your decision.

1. Can the contractor work in your state? In most cases contracting licenses don't transfer from one state to another although a few states have reciprocity agreements. An Arizona contractor, for example, can apply in Nevada, California and Utah, as all three states have reciprocal agreements. Unfortunately this is rarely the case. More likely, if you select an out-of-state GC, the contractor will need to register as a foreign corporation with local tax, insurance and worker's compensation issues to work through. While that may seem like miles of red tape, for an experienced contractor it is simply the cost of doing business and they will have already researched the requirements before they bid.

2. Is the hotel responsible for housing the contractor's team? Hotel floors are usually taken out of commission during renovation, one floor after another. Once a floor is finished it is returned to inventory until the entire hotel is complete. Since rooms on the floor being renovated aren’t being sold anyway, out-of-state contractors often negotiate with hotel owners to keep their team at the hotel in these unoccupied rooms.

3. Who is responsible for meeting local building codes? Whether the project is local or out-of-state, the architect and project manager, working together, are usually the people responsible for communicating with the various governing factions at each step of the renovation project and monitoring that all work is being performed in accordance with applicable codes. In more complex situations, often encountered in major metropolitan cities, an expediter will be hired to speed up the code and licensing process.

Part of vetting subcontractors is to reach out to local material suppliers, find out who their larger commercial contractors are and whether they have a good pay history. Also look for subcontractors that are accustomed to working within operating facilities, such as hotels.

Whether they are local or out-of-state, a qualified GC will streamline a project timeline and better set you up for success, because they realize the impact of lost revenue and the urgency in turning around rooms efficiently and quickly. They have a strong understanding of brand and design standards. Plus, they will advocate for you to help find ways to value engineer the project, stripping away unnecessary costs. Those are the factors in deciding the right GC for you, and not their zip code.