What Happens When Government Per Diems Change?

What Happens When Government Per Diems Change?

Because federal government employees purchase a significant quantity of hotel rooms, the General Services Administration (GSA) has partnered with Federal Travel Regulation (FTR) compliant accommodations to provide federal travelers with per diem hotel room rates for select high-volume travel destinations in and outside of the Continental United States. These federal guidelines frequently serve to determine the hotel per diem allowances for state and local government travelers as well.

Using the federal government per diem as guidance, individual properties and hotel chains set special room rates to offer to government travels. Hotel owners and operators have the option to decide who qualifies for a government rate. Depending on the policy of the brand or hotel, qualified government business can range from direct employees of federal, state, and local agencies, to contractors working on behalf a government division.

With a few exceptions, “government business” is a small source of demand in any individual hotel. While the room rate is typically on the lower-end of the pricing schedule, government-related travel can be a relatively stable source of demand, especially during economic recessions when other, more lucrative transient and group travel disappears.

Every year, the GSA reviews the lodging per diems and adjusts them as needed. Adjustments can be made to increase, or lower, the per diem as economic and market conditions dictate. Hoteliers across the country pay attention each year when the new per diem rates are announced, and then assess the impact accordingly.

The Case of Cobb County

Prior to 2018, the GSA considered Cobb County as part of the greater Atlanta area along with Fulton and DeKalb Counties. During fiscal year (FY) 2018, the per diem hotel rate for Cobb, Fulton, and DeKalb counties ranged from $148 to $166, depending on the month. In FY 2019, the Cobb County rates dropped to $116 year-round, while the per diem rate for Fulton and DeKalb Counties was adjusted to a range of $152 to $159.

CBRE purchased data from Kalibri Labs that allowed us to isolate the room nights occupied, and revenue paid, by travelers who paid a government rate in Cobb, Fulton, and DeKalb Counties from January 2015 through June 2019.

The data on the purchase of room nights are separated into various categories, of which government is one. Exhibit 1 details the levels and percentages (inserted over bars) of total revenue generated in the various channel categories in Cobb County: 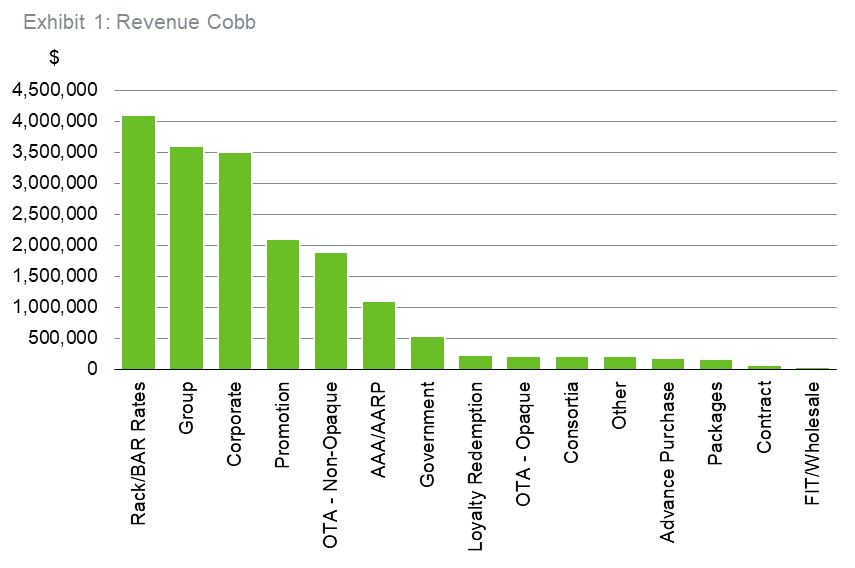 Although not insignificant, revenues from the government channel make up a small proportion of the overall hotel market in Cobb County. Figures from our comparison groups, Fulton and DeKalb, have remarkably similar proportions, around three percent of the total. If this proportion is typical for hotel markets, then per diem effects on the government channel would need to be large and pronounced to have significant effects on the aggregate. Some markets with many proximate government offices and facilities may have especially large proportions of government revenue and thus be more sensitive to per diem effects.

The effects of the per diem rate could potentially be felt through both the rate paid by guests in government channel and by the number of nights stayed. The latter effect is of particular importance as smaller numbers of guests could potentially have implications for rates other travelers pay. If a hotel finds it can charge higher rates when occupancy reaches some compression threshold, lower numbers of room nights taken up by the government channel could reduce the number of nights that achieve this threshold.

Exhibit 2 illustrates the average rate paid by guests in the government channel in Cobb County and in Fulton/ DeKalb Counties for comparison. 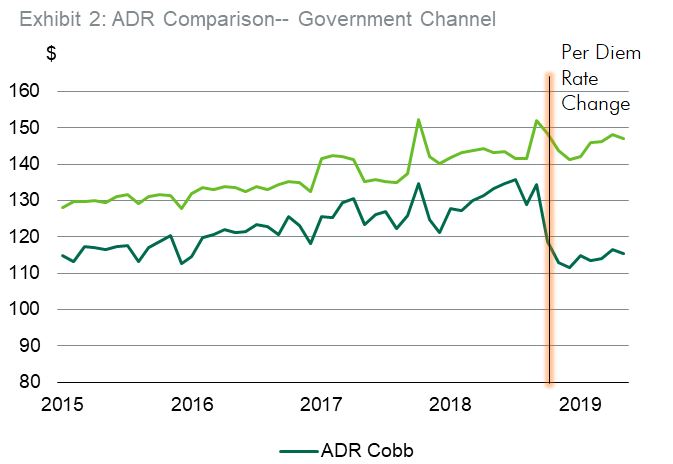 The rate in Cobb County shows an immediate drop in the range of about $20 in October of 2018, slightly less than the difference in the average per diem rate before and after in Cobb County. Concurrently there was no statistically detectable change in the Fulton/ DeKalb rate. This suggests there is little appetite among government channel guests to maintain the rate they had previously been paying with non-per diem funds. Fulton and DeKalb counties, having many hotels in the Greater Atlanta area, had higher rates than in Cobb before and after the Cobb rate change. The Super Bowl event hosted in Atlanta that had broad effects in January and February of 2019 did not have any discernible influence over government channel rates. 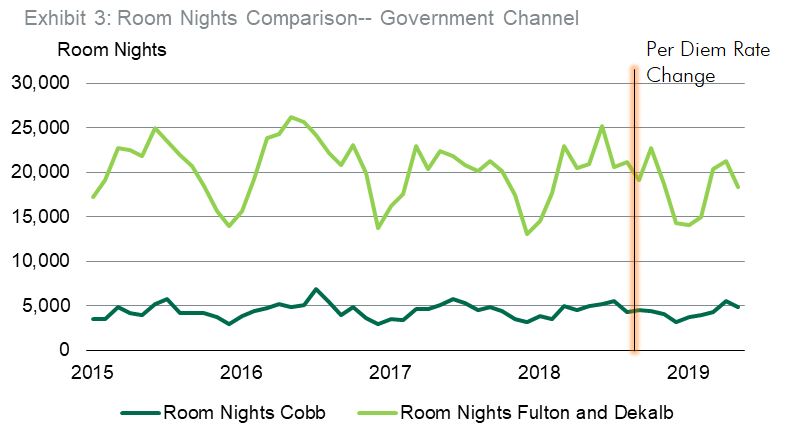 There were no detectable year-over-year changes in room nights from the government channel in any of the counties. This would seem to suggest that the reduction in the per diem rate did not have an appreciable effect on compression nights. Little or no substitution from Cobb to the higher per-diem hotels in Fulton and DeKalb counties occurred. Conversely, it does not appear that government travelers moved from higher per diem hotels in Fulton/DeKalb counties to lower per diem properties in Cobb county. Per diem price differences between geographies has a less of an impact on government travel compared to other demand segments since the higher rate is “approved” at the preferred location.

With the entirety of the effect of the new per diem rate coming from changes to ADR, the total net effect of the change on aggregate Cobb County ADR is about $0.40. Considering the ADR for this area is well above $100, this effect is quite small—even with a dramatic shift in the per diem rate and rate paid by Government channel guests. The effect would be relatively more pronounced in markets with higher proportions of government channel guests.

We realize that the impact of changes to the federal government lodging per diem will differ from market to market. However, the significant reduction in the hotel per diem rates in Cobb County, and the resulting small impact on the performance of the lodging market, does provide some insights that may be applicable elsewhere.

For the markets studied, the government channel is a small proportion of the total hotel market, accounting for only 3 percent of the total rooms revenue. This limits the impact of per diem rate changes in aggregate. Even for large changes such as was seen in Cobb, we expect the effects of per diem rate to be felt primarily, if not exclusively, through rate. Finally, we did not find evidence that government channel guests substitute rooms in one market to another based on per diem rates.

Bram Gallagher Ph.D. is an Economist with CBRE Hotels Research. Aman Patel is a Research Analyst with CBRE and a member of the Class of 2022 at the Cornell University School of Hotel Administration. To learn more about the performance of 60 lodging markets across the U.S., please visit pip.cbrehotels.com/hotelhorizons, or call (855) 223-1200. This article was published in the October 2019 edition of Lodging.