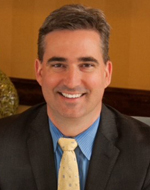 In his new role as General Manager, Stocker is responsible for all of the hotel’s operations, sales, administration, and human resources. Stocker joins the DoubleTree team with a depth of industry knowledge. He began his hospitality career in the kitchen holding various positions and working his way up to Executive Chef at several well-known hotels and resorts. After nine years, Stocker made the transition from culinary to operations, beginning at the St. Louis Airport Marriott as the Director of Operations. Since that time, he has held numerous management positions, including Assistant General Manager, General Manager, Director of Food & Beverage, and Area Director of Food & Beverage. Most recently, Stocker served as the Director of Operations at the Marriott Little Rock and the State House Convention Center.

“We are thrilled to welcome Michael to the Waterford team,” said COO and President of Waterford Hotel Group, Rob Winchester. “We look forward to working with him in this new role. I know the DoubleTree Little Rock will thrive under his leadership and guidance,” he added.

About DoubleTree by Hilton Little Rock