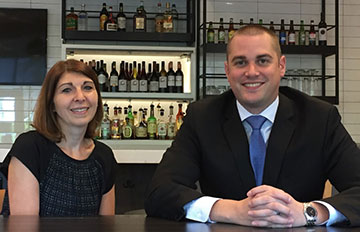 As General Manager, Dave is responsible for all of the hotel’s operations, sales and administration, as well as the associates employed at the property. Since 2005, Dave has held several positions at the Sheraton Hartford Hotel at Bradley International Airport, a Waterford-managed property. These include Banquet Supervisor, Assistant Outlets Manager, Banquet Manager, Front Office Manager, Food and Beverage Operations Manager, and most recently Director of Operations.

In her new role as Director of Sales, Candy will be responsible for the total sales efforts for the hotel, as well as supervising sales related personnel, and implementing sales and marketing strategies to maximize profits while also maintaining guest satisfaction. Candy joined Waterford Hotel Group as part of the opening team at the Marriott Hartford in September 2005. Since that times, she has held Sales Manager roles for both the Marriott Hartford Downtown and Hilton Hartford.