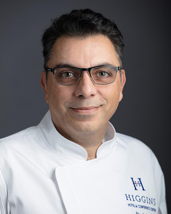 Brandel brings more than 25 years of culinary experience to The Higgins Hotel and will spearhead menu development, culinary innovation and operations of the various dining outlets, which include the Hotel’s signature restaurant Café Normandie, a lobby lounge named Kilroy’s Bar and Lounge, rooftop bar Rosie’s on the Roof and Provisions, a marketplace ideal for grab-and-go options. As Executive Chef, Brandel will also lead catering for the Hotel’s Conference Center, which will serve as a meeting and event space for private rentals, educational programming and various  conferences and symposia hosted by the Museum.

“Chef Brandel brings indisputable talent and passion to The Higgins Hotel, which will set a distinguished tone for the property and its diverse array of dining options,” said Daniel Rhodes, General Manager of The Higgins Hotel & Conference Center. “We are pleased to have a chef of his caliber lead the culinary team for this unique hotel, set in a city with such rich culinary history.”

Most recently, Brandel served as the Executive Chef at Atrio Restaurant & Wine Room at the Conrad Miami and Banquet Chef at the Loews Hotels in Miami Beach. He also served as Executive Fine Dining Chef at several Ritz-Carlton properties around the country. A native of France, Brandel began his career in French kitchens, serving as Senior Chef de Partie at the Park Lane Hotel and then as Sous Chef at The Dorchester Hotel.

Brandel credits his grandmother with inspiring his culinary pursuits—she owned a restaurant in his hometown of Champagne, France, where he was able to develop basic skills early. He eventually went on to study culinary arts at École Hôtelière en Marne and completed his apprenticeship at a Michelin-starred restaurant in Champagne. Following his apprenticeship, Brandel served as Chef de Tournant at a French and Italian restaurant named Boccaccio in Nice.

Mixing his French heritage with New Orleans flavor, Brandel’s goal is to create menu items that tell the story of how American culinary culture was inspired by the war era. Café Normandie’s seasonally changing menus will include modern takes on traditional French dishes, such as Poulet Normandie and Normand Fricassee, and guests will also find New Orleans Creole-inspired dishes, including a vegetarian Jambalaya and Cajun flatbread.

Advance reservations are now being accepted for Café Normandie online or by calling 504-528-1941 ext. 6. Hi-res imagery of Chef Virgile Brandel, as well as photos and renderings of The Higgins Hotel & Conference Center, can be downloaded here.

About The Higgins Hotel & Conference Center

Named after Higgins Industries shipbuilder Andrew Higgins, The Higgins Hotel & Conference Center is located on The National WWII Museum’s campus in the heart of the New Orleans Arts and Warehouse District. The art deco-style property features 230 guest rooms, a second-floor conference center with more than 18,000 square feet of meeting space, a full-service restaurant, rooftop bar and concierge lounge for special guests. In addition to offering visitors convenient accommodations, the development also helps further the institution’s educational and research resources for students and scholars alike. Opening in November 2019, The Higgins Hotel & Conference Center will complete the Museum’s campus footprint on the river side of Magazine Street, bringing increased vitality to the neighborhood, attracting thousands of visitors per year.

About The National WWII Museum

The National WWII Museum tells the story of the American experience in the war that changed the world—why it was fought, how it was won, and what it means today—so that future generations will know the price of freedom and be inspired by what they learn. Dedicated in 2000 as The National D-Day Museum and now designated by Congress as America’s National WWII Museum, it celebrates the American spirit, the teamwork, optimism, courage and sacrifices of the men and women who fought on the battlefront and served on the Home Front. The 2018 TripAdvisor Travelers’ Choice Awards ranks the Museum No. 3 in the nation and No. 8 in the world. For more information, call 877-813-3329 or 504-528-1944 or visit nationalww2museum.org.