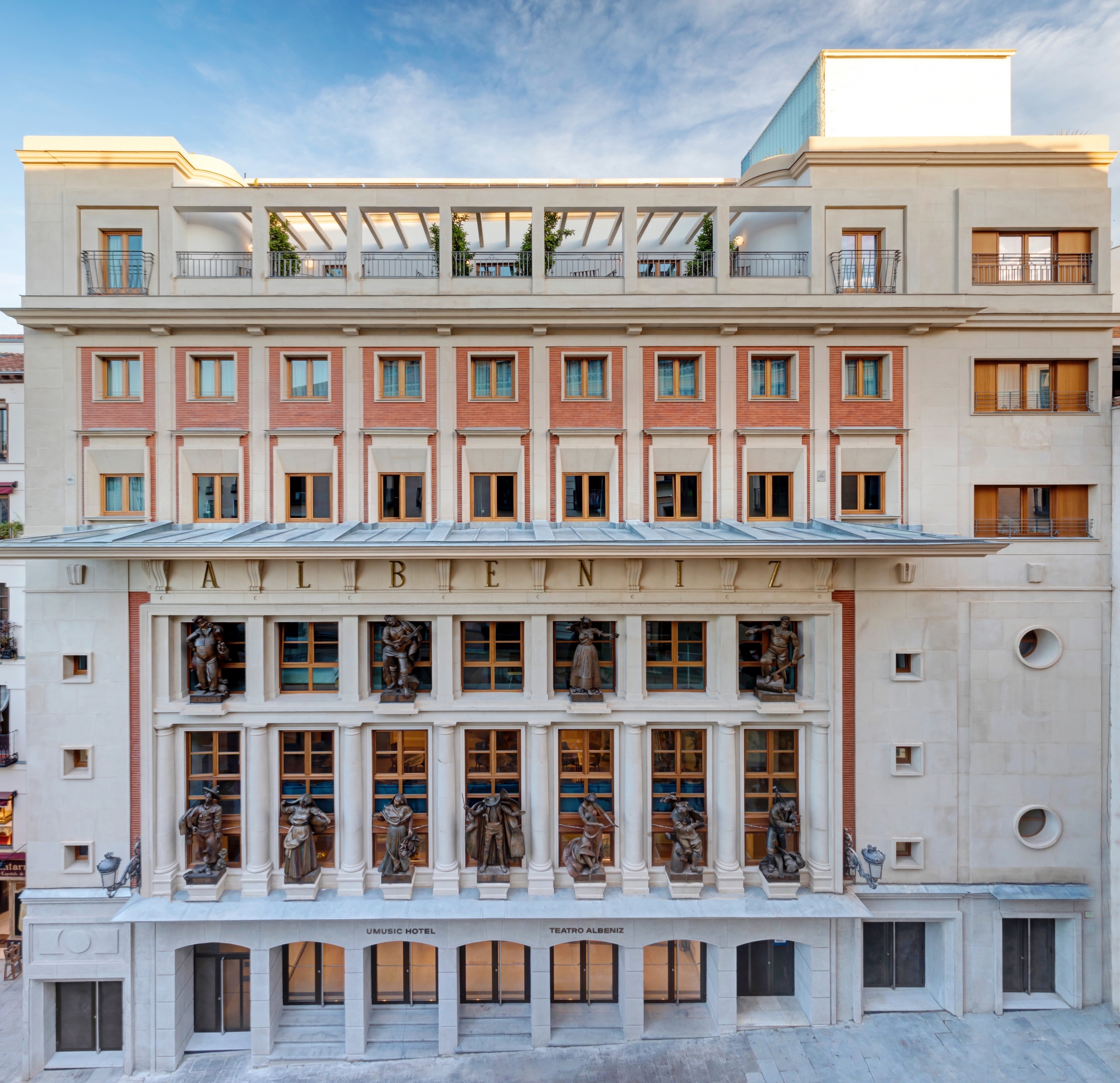 MADRID, SPAIN (November 2, 2022) – Today, UMusic Hotels announced that bookings are now available at the brand’s first property to open worldwide, UMusic Hotel Madrid. Located within the bustling Centro district of Madrid and inspired by the city’s thriving culture, UMusic Hotel Madrid has transformed the building that houses the historic Albéniz Theater, serving as a creative hub in the community. By utilizing a renowned and recognized property within the epicenter of Madrid’s music and entertainment scene, UMusic Hotels continues their commitment to provide a property to the local community that is skilfully designed to complement Madrid’s landscape and authentically incorporate elements of the local music scene.

“The opening of this particular property in Madrid has an important strategic value for UMusic Hotels.  Not only is it our first establishment in Europe, but the new hotel lives in a beautiful, historic building that perfectly combines hospitality and entertainment,” says Robert Lavia, CEO of UMusic Hotels.  “The new UMusic Hotel will underscore Madrid as a vibrant hub for music, arts, and entertainment; serving as a creative hub that will promote social impact, education, sustainability and innovation through the power of music.”

The property, which includes 130 rooms, has undergone a comprehensive renovation to transform it into a 5-star establishment with upscale design, two stylish lobbies, meeting rooms, a bar restaurant, outdoor pool, and rooftop bar overlooking the Madrid skyline. Guests will have the opportunity to discover the soul of the city through Madrid’s rich local music heritage, at the hotel’s renovated historic theatre, with 898 seats. Universal Music Spain will work with the property to continue bringing Madrid some of the biggest names in entertainment, making UMusic Hotel Madrid a premiere destination for guests around the world.

It was just recently announced that the musical “Company” will be the first production at the restored and historic Albéniz Theater. Acclaimed actor Antonio Banderas will resume his role as the director and title character Bobby. The show is set to run until February 14, 2023.

Other locations from the global collection of music-based experiential hotels have previously been announced in the US and Latin America.

UMusic Hotels is a venture between Universal Music Group and Dakia Entertainment Hospitality Group creating a new global collection of immersive hotels and experiences inspired by music. UMusic Hotels will create unique experiences for fans, guests, and artists alike, with music and entertainment at the forefront of design and guest experience all around the globe. Embodying each location's unique spirit, the hotels will draw inspiration from their respective local culture and serve as creative hubs in communities worldwide – promoting positive social change, education, and innovation through the power of music.