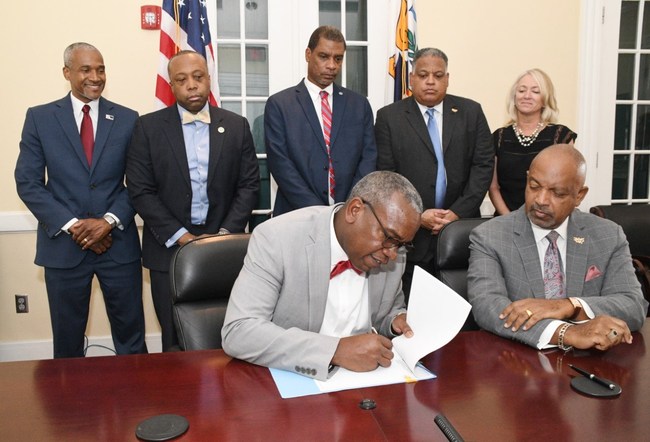 CHARLOTTE AMALIE, U.S. Virgin Islands — Oct. 24, 2019 — The U.S. Virgin Islands took another in a series of strategic moves to encourage economic development under the leadership of Governor Albert Bryan, Jr. The expanded Hotel Development Bill, No 33-0104, signed into law on Oct. 7 allows hotel developers to channel a percentage of room revenue to finance renovating existing properties and building new hotels. Administered through the U.S. Virgin Islands Economic Development Authority (USVIEDA), the bill was created to encourage and promote economic growth in the Territory and incentivize construction of new hotels and resorts including commercial and other related facilities.

“The signing of this bill is a game-changer for the Territory’s hospitality industry. It will significantly benefit hotels, resorts, and small businesses impacted by increased tourism and accelerate opportunity for employment in the Territory,” said Kamal I. Latham, CEO of the U.S. Virgin Islands Economic Development Authority.

Under the new law, up to 100 percent of revenues generated from the existing 12.5 percent occupancy tax, plus 100 percent of the gross revenue generated from the newly created Economic Recovery Fee, which is up to 7.5 percent of the hotel guest bill, may be allocated to finance new hotel construction or a renovation project. Hotel developers would be able to utilize these funds to assist with debt service by leveraging financing for new development or property repairs and improvements.

“This is a very powerful hotel development and infrastructure financing mechanism that creates an environment for new development,” said Stephen Evans-Freke, President of Water Island Development Company. “It opens the door for transformative projects like ours to strengthen the island’s position as a top tourism destination.”

It is anticipated that the bill will motivate developers to obtain financing by making the bonds issues more attractive to investors in the capital markets, and drive hotel and resort development projects forward in the Territory.

Latham welcomes investment. “The U.S. Virgin Islands, America’s Business Paradise in the Caribbean, is committed to supporting tourism development with public-private partnerships. We encourage prospective investors to explore the competitive tax incentives offered here under the U.S. flag.” Details and contact information can be found at www.investusvirginislands.com.