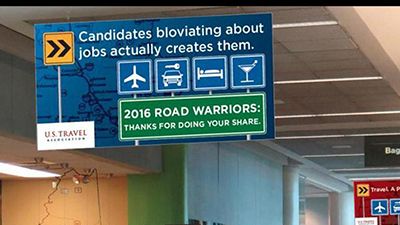 Actually, they're helping local economies just by being in town—and a U.S. Travel Association messaging campaign is driving home the point.

"Candidates are constantly extolling the value of specific economic sectors from the stump: manufacturing, tech, ag. How about travel?" said U.S. Travel Association President and CEO Roger Dow. "The value of our industry as a job creator is measurable in every congressional district in this country, and the campaign season itself provides very visible evidence."

U.S. Travel is promoting this message with a campaign at the Manchester, N.H. airport that is attracting social media attention from political journalists.

Economists at U.S. Travel found evidence that the travel activity associated with presidential politics pays off in a big way for early primary states. In New Hampshire, for example, every visitor in town for the campaign season spends approximately $350 per day on transportation, hotel rooms, meals, rental cars and the other basic needs of camping out for the duration, researchers found.

While there is no reliable data for exactly how many people invade the Granite State specifically for the primaries, or for how long, there are strong indications of a significant surge. For the past five presidential cycles, average hotel occupancy in New Hampshire was estimated at 78,400 room-nights higher for the year preceding the primary compared to other years. Applying the state's average room rate, that's an extra $8.9 million in politics-related hotel revenue.

That added economic activity equals jobs. Every $80,700 in visitor spending in New Hampshire creates one job, according to U.S. Travel analysis. That means one job supported for every 33 reporters coming to the state to cover the primaries for seven days.

U.S. Travel will continue its campaign in South Carolina on hotel key cards, as well as with ad buys in Cleveland and Philadelphia for the party conventions and in Las Vegas for the October 19 presidential debate.

"The best place to get the attention of politicians is where they live—and right now, of course, they live in the state with the next primary," Dow said.

About The U.S. Travel Association

The U.S. Travel Association is the national, non-profit organization representing all components of the travel industry that generates $2.1 trillion in economic output and supports 15 million jobs. U.S. Travel's mission is to increase travel to and within the United States.
Visit www.ustravel.org.