U.S. Hotels: Changes in RevPAR and Profits During Historical Recessions

Home/U.S. Hotels: Changes in RevPAR and Profits During Historical Recessions

U.S. Hotels: Changes in RevPAR and Profits During Historical Recessions

The U.S. lodging industry was prepared for a slowdown in performance entering 2020. CBRE Hotels Research was projecting a 1.1 percent increase in RevPAR for the year. Even with this low level of revenue growth, there were certain factors that could have sustained – or at least cushioned the blow of minimal declines ­- the nine-year trend of profit growth for U.S. hotels since 2010.

Obviously, the operating landscape has changed with the impact of the COVID-19 virus. CBRE Hotels Research is continually monitoring the latest lodging performance data and economic forecasts to prepare our projections of declines in occupancy, ADR, RevPAR and total revenue for 2020. For the latest guidance, please visit:
https://www.cbre.com/covid-19

To provide some context to the expected declines in profits for U.S. hotels during 2020, we analyzed the operating performance of properties during 11 economic recessions from 1938 through 2009. Lodging performance data comes from CBRE’s annual Trends® in the Hotel Industry survey of operating statements dating back to 1937.

For each economic recession, we analyzed hotel performance data for the year that the average hotel in our Trends® survey experienced the greatest decline, or least increase, in gross operating profits (GOP)*.

In 2001, of the Trends® properties that experienced a decline in RevPAR, only 2 percent saw RevPAR fall by more than 30 percent. On average, these properties suffered a 35.3 percent drop in total revenue which resulted in a 54.2 percent decline in GOP.

During the 2009 recession, 10.2 percent of the properties that experienced a decline in RevPAR saw their rooms revenue drop by more than 30 percent. On average, these properties also suffered a 35.3 percent drop in total revenue, but the decline in GOP averaged 57.0 percent.

Comparing the two recessions, the 2001 RevPAR downturn was driven by a decline in occupancy, while the 2009 RevPAR decline was the result of almost equal declines in occupancy and ADR. Prior CBRE research has found that RevPAR declines influenced by ADR typically result in greater falloffs in profits. Further, the proliferation of intermediaries in the booking process between 2001 and 2009 increased the cost of revenue acquisition. Both these factors contributed to the greater decline in GOP observed in 2009.

Given the low occupancy levels being reported by hotels around the U.S., most historical thumb rules will not apply during the spring and summer months. However, as currently anticipated, if we start to see signs of recovery toward the end of the year, some of these historical RevPAR/GOP relationships may be of value when assessing operating performance for the entire year. 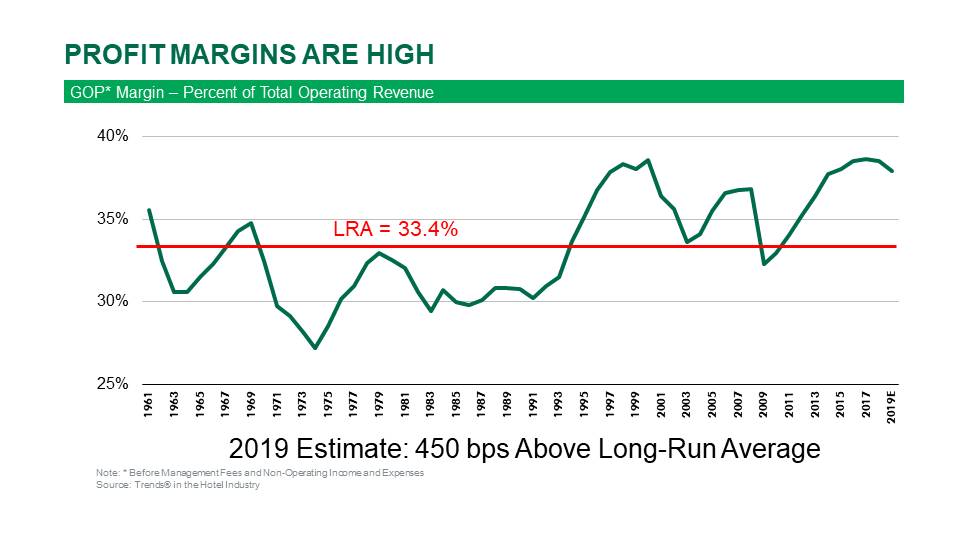 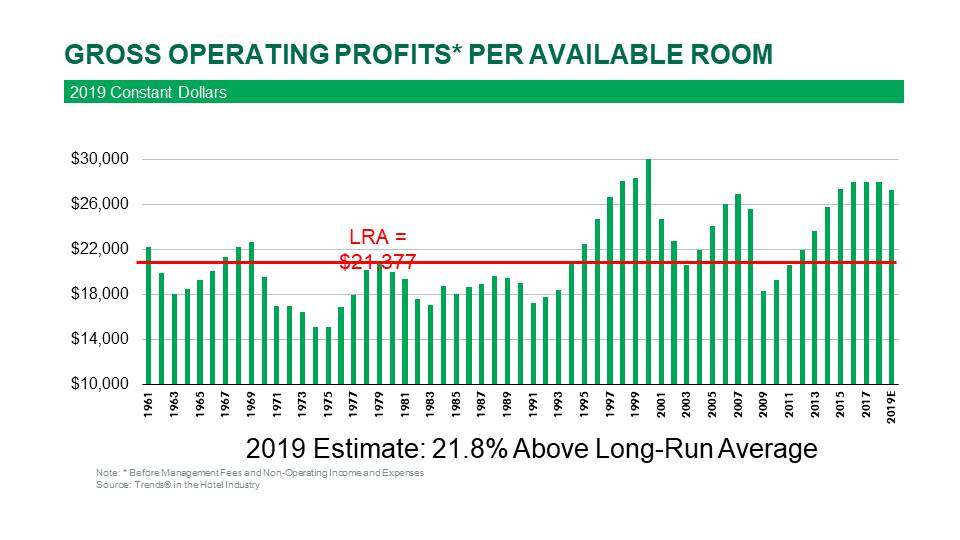 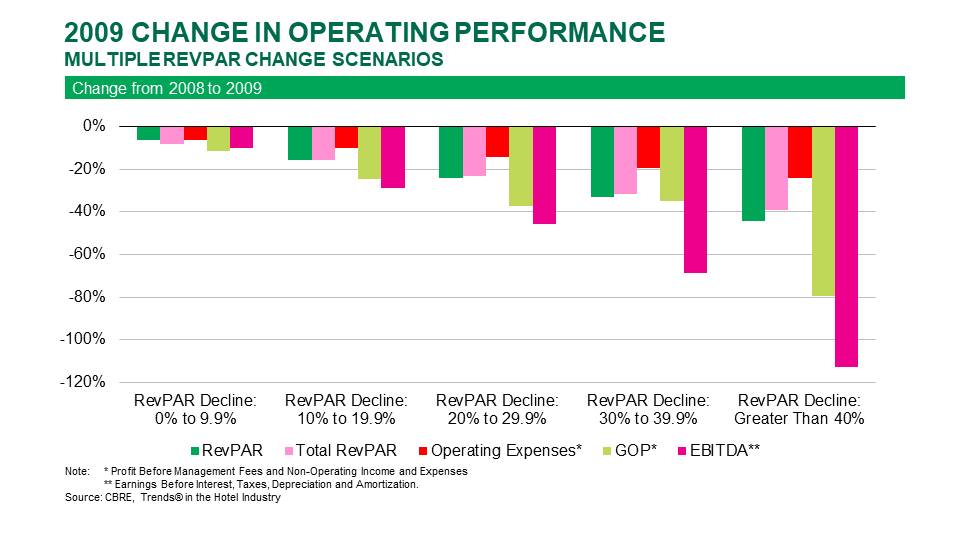 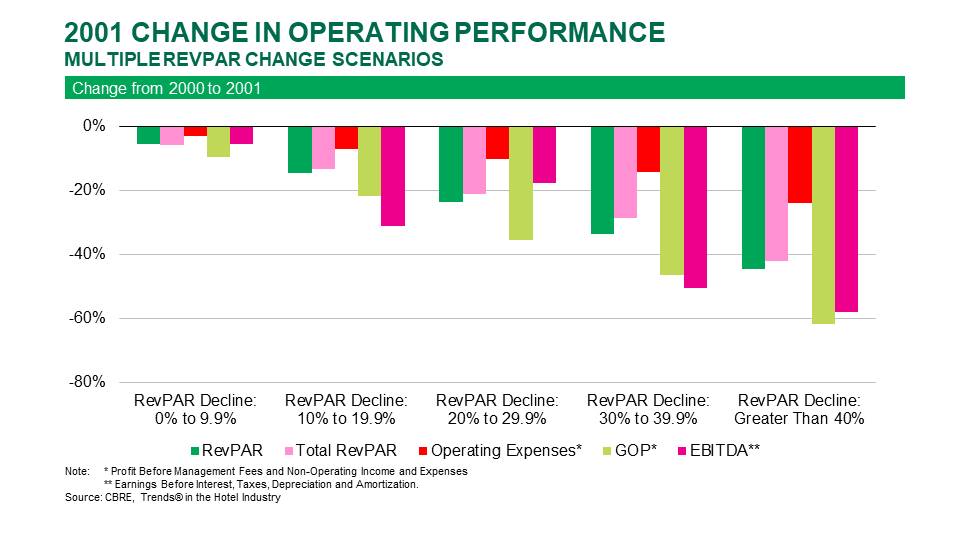 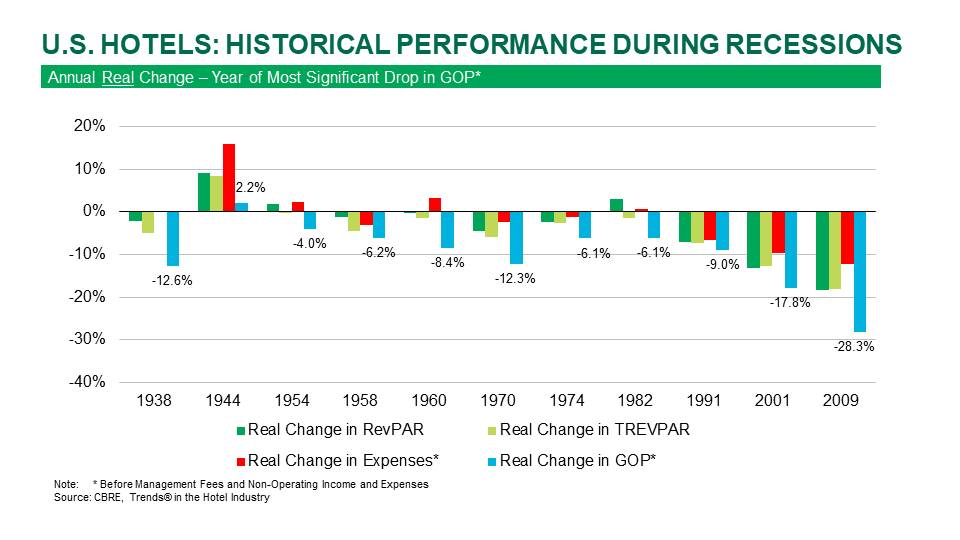 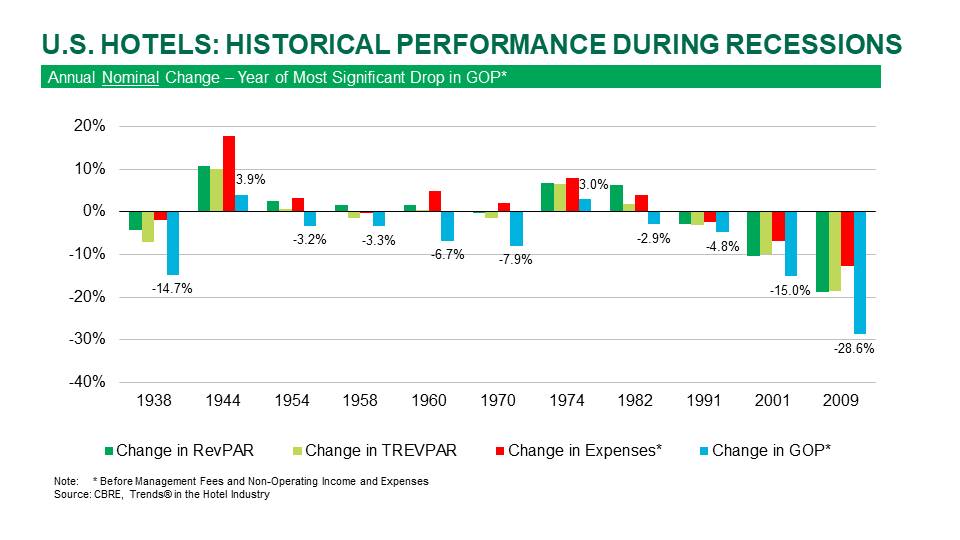 Robert Mandelbaum is Director of Research Information Services for CBRE Hotels Research. To contact a CBRE Hotels professional to assist in evaluating the performance of your hotel(s) in 2020, please contact Client Services at [email protected] or call (404) 812-5024.