By Robert Mandelbaum and John B. Corgel, Ph.D.

According to the March 2019 edition of CBRE’s Hotel Horizons® forecast report, RevPAR growth for the U.S. lodging industry will be limited to under 2.5 percent through 2020.  Further, CBRE is projecting a 0.6 percent decline in RevPAR for 2021 as CBRE expects the economy to slow down during the year.  The combination of modest increases in revenue and rising operating expenses (especially labor) make hotel owners and operators nervous about their ability to enjoy profit growth the next few years.

While the profit growth story is concerning, it should it should be noted that current GOP margins are 500 basis points above the long-run average, and at their highest level since the 1960s.  Therefore, if underwritten properly, owners should be receiving attractive returns on their investments.

Another way to assess the bottom-line health of the U.S. lodging industry is to examine the ability of hotel owners to meet their debt obligations.  If hotel operations are generating enough funds to pay the interest on the loans taken out by the owners for purchasing, building, furnishing, or operating their properties, then the investment and lending community is at ease.

One metric used to analyze this measure is the ratio of cash flows to the interest payments made by the hotel.  For this article, we analyzed the relationship between the Earnings Before Interest, Taxes, Depreciation and Amortization (EBITDA) and interest expenditures of 613 U.S. properties for the years 2015 through 2018.  Also, we reviewed the rent payments of the hotels under study to gain insights about total fixed obligations but found that these payments are modest relative to interest costs and not consequential enough to change our results.

In 2018, the study sample offered an average of 194 rooms and achieved an occupancy of 74.6 percent along with a $163.35 ADR.  In aggregate, interest payments equaled 10.4 percent of total operating revenue during the year.

In 2018, the hotels in the study sample achieved an EBITDA to interest payment coverage ratio of 2.6 percent.  Because of the recent slowdown in revenue and profit growth, this ratio has declined from a high of 2.9 percent in 2016.  Based on historical analyses performed by CBRE, the interest coverage ratio typically exceeds 2.5 during prosperous periods in the lodging industry business cycle.  Therefore, coverage ratios more than 2.5 can be considered strong.

Among the different chain-scales, interest coverage in 2018 was highest for upper-midscale properties (2.8), followed by economy/midscale and upper-upscale (2.7).  The lowest ratios were observed at hotels operating in the upscale (2.5) and luxury (2.6) categories.  While relatively low, both measures are above the desirable 2.5 coverage ratio benchmark. 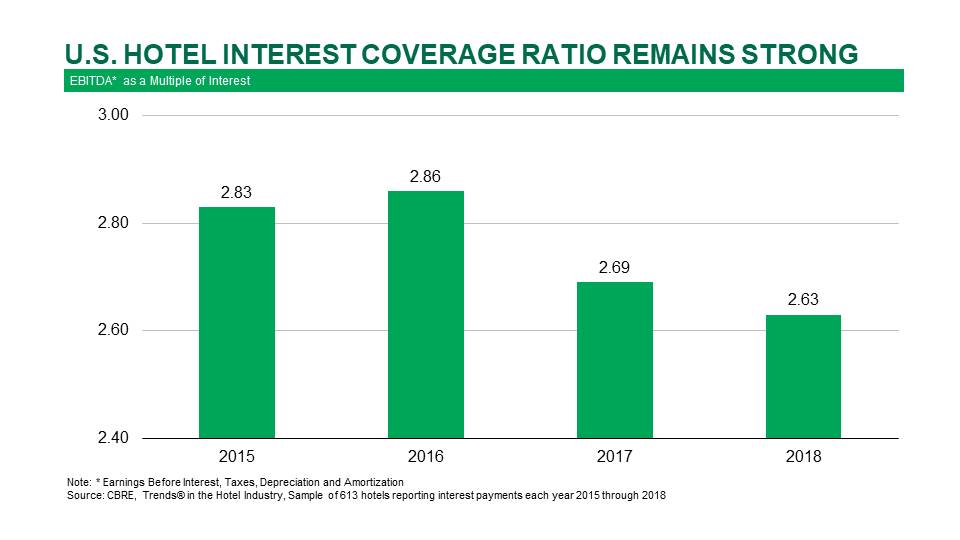 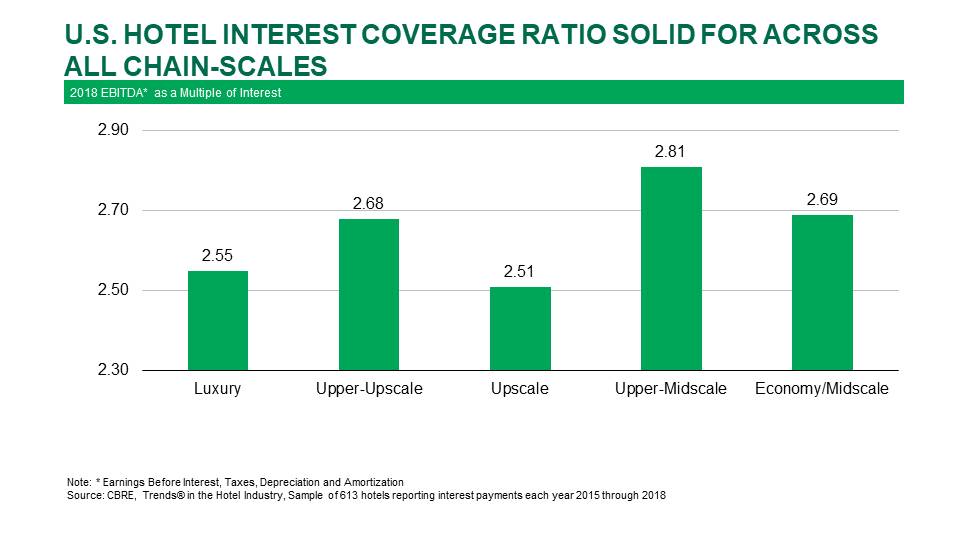 Given CBRE’s modest forecasts of revenue for the next five years, how will this impact the ability of hotel owners to continue to pay their interest obligations?  To estimate future interest coverage ratios we utilize forecasts of profit growth generated by our proprietary Investment Performance econometric forecast model to drive future levels of EBITDA.  At the time this article is written, there are opposing thoughts among economists regarding the future direction of interest rates.  While opinions differ, no projections call for extreme movements up or down.  Therefore, we have opted to hold interest payments constant at 2018 levels for this analysis.

Based on the March 2019 edition of Hotel Horizons®, CBRE’s baseline forecast for future U.S. hotel profits calls for gains of roughly 2.0 percent in 2019 and 2020, but a decline of 1.5 percent in 2021.  The falloff in 2021 is attributable to an assumed slowdown in the economy during 2020 that will impact lodging demand the following year.  After the blip in 2021, profits are projected to recover at approximately a 3.0 percent pace in 2022 and 2023.

Given the preceding pace of changes in EBITDA, and holding interest payments constant, the interest coverage ratios will remain above 2.5 from 2019 through 2023.  Even during the 2021 slowdown the ratio drops to a low of 2.7, which is greater than the 2.6 ratio observed in 2018.  During 2021, 94.3 percent of the study sample should still be able to achieve EDITDA levels greater than their interest expenditures.  The interest coverage ratio peaks at 2.9 in 2023.

Each quarter CBRE produces alternative lodging forecasts based on a variety of economic assumptions.  To test the ability of U.S. hotels to cover their interest payment obligations during potential future stressful economic environments, we used the two most pessimistic economic forecast scenarios and resulting profit projections.  The economic scenarios are labeled as “downside” and “extreme downside”.  The “downside” scenario assumes flat, or declining, levels of employment during the years 2020 through 2022.  The “severe downturn” scenario calls for sharp declines in employment, income, and CPI during 2019 and 2020.

Using the profit change assumptions of the “downside” scenario, and holding interest payments constant, the interest coverage ratio dips to a low of 2.5 in 2021 and 2022.  During this year, an estimated 93 percent of the properties in the study sample will be able to achieve EDITDA levels greater than their interest expenditures.

Under the “severe downside” scenario, profits are forecast to decline by 11 percent in 2019, and another 22 percent in 2020.  In light of the lower levels of EBITDA, the interest coverage ratio drops to a low of 1.8.  While this is below the current highly desirable 2.5 mark, it does allow for 87 percent, or more, of the properties in our study sample to generate sufficient levels of cashflow to cover their interest payments. 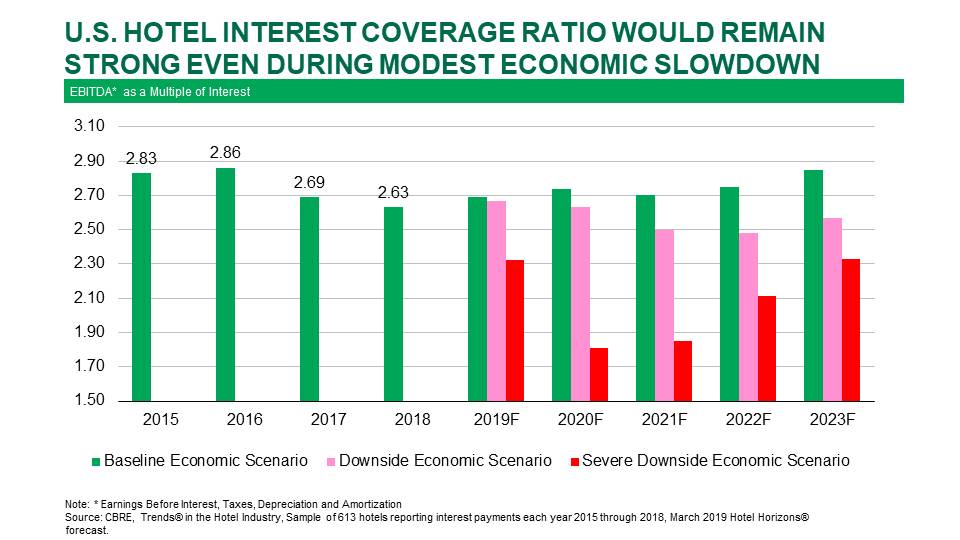 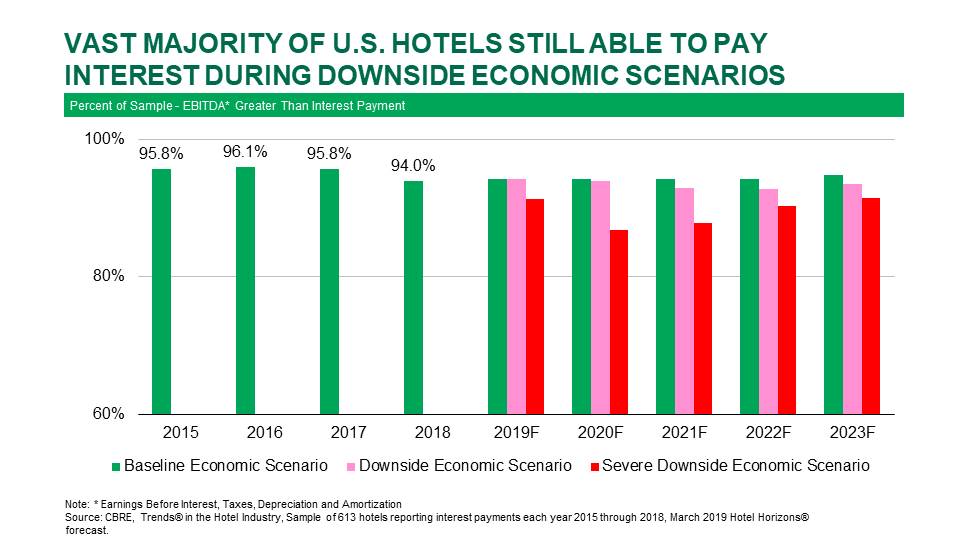 Even during the most extremely negative circumstances a surge in outright defaults does not appear to likely in the future.  However, a lowering in interest coverage ratios could have some implications.  Any downward movements in debt-related ratios could spook a skeptical lending community, which in turn could have a negative impact on the availability of loans and favorable financing terms.  Plus, existing loan agreements have performance clauses in them.  A decline in coverage ratios could trigger a change in financing terms or require the borrower to reserve more cash.

The relatively strong interest coverage ratios that persist even through the most dour economic forecasts are a significant indication of the positive health of the U.S. lodging industry.  As of May 2018, the growth story for U.S. hotels may not be impressive.  However, the current and expected levels for lodging profits, returns, and debt coverage are strong.

Robert Mandelbaum is Director of Research Information Services for CBRE Hotels Research.  John B. (Jack) Corgel, Ph.D., professor of real estate at the Cornell University School of Hotel Administration and senior advisor to CBRE. To benchmark the profits of your hotels, please visit https://pip.cbrehotels.com/property-analytics/benchmarker.  This article was published in the July 2019 edition of Lodging.