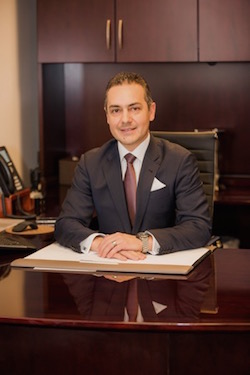 Trump International Hotel & Tower® Chicago is pleased to announce the appointment of Gabriel Constantin to general manager of the Forbes five-star property following a successful, five-year tenure with Trump Hotels.

Constantin joins an award-winning team that prides itself on superior customer service and guest experiences. Prior to joining Trump Hotel Chicago, he served as the manager for Trump Hotels’ Old Post Office in Washington, D.C., whose highly acclaimed restoration and luxury status has earned international acclaim. The property opened in September 2016 and quickly established a reputation for its outstanding location, iconic landmark status, and world-class service.

Constantin was immersed in the hospitality arena at a young age, working with his family’s business in Bucharest, Romania. After earning his degree in finance and management from the Ecological University of Bucharest, he avidly pursued a career in the hospitality industry. He quickly moved through food and beverage positions in the U.K. and Ireland before moving to the United States in 2002, where he served in leadership roles at the Westin (Greenville, SC), and InterContinental Hotels Group (Baltimore, MD) before being named director of operations for The Ritz-Carlton in the greater Philadelphia area.

In early 2003, he was recruited to join Trump Hotels to oversee the food and beverage operation for the group’s Doral property, which underwent a $250 million transformation into a luxury resort with 700 rooms, 100,000 square feet of event space and a $30 million food and beverage budget.

Truly embracing the Trump Hotels "Never Settle" motto in all that he does, Constantin’s guiding philosophy emphasizes refined, personalized service and an attention to detail carried through all elements of the award-winning Chicago hotel.

Trump International Hotel & Tower® Chicago, located in the heart of the city at 401 N. Wabash Avenue, welcomed its first hotel guests in January 2008. The hotel, comprising floors 14-27 of a 92-story residential tower developed by the Trump Organization, features 339 luxuriously appointed guest rooms including one-, two- and three-bedroom suites; Sixteen, the two-star Michelin-rated restaurant; The Spa at Trump® with 53 specially appointed spa guest rooms; the Health Club; Rebar, a chic cocktail lounge; The Terrace and more. Designed by the noted architectural firm of Skidmore, Owings & Merrill with interiors by McGinley Design, Trump International Hotel & Tower® Chicago is a stunning addition to Chicago’s distinguished skyline. The hotel underwent a design refresh as of 2016, elevating the guest rooms, suites and spa guest rooms in addition to the lobby and Rebar. The hotel and restaurant were each awarded five stars by the esteemed Forbes Travel Guide in 2017. The property has also been recognized by Travel + Leisure as one of the “World’s Best Hotels” for 2016. It was also recognized by Conde Nast Traveler’s Choice Award as “Best in the World” 2016. For room and event reservations at Trump International Hotel & Tower® Chicago, call 312?588?8000 or (877) 458-TRUMP (7867).

Trump Hotels™ is a family enterprise with a history of providing extraordinary customer experiences. The brand's exceptionally designed hotels in iconic locations put guests at the heart of each destination. Led by seasoned hotel industry veteran Eric Danziger, Trump Hotels is part of The Trump Organization, helmed by Donald Trump Jr. and Eric Trump. Reservations can be made at www.TrumpHotels.com.