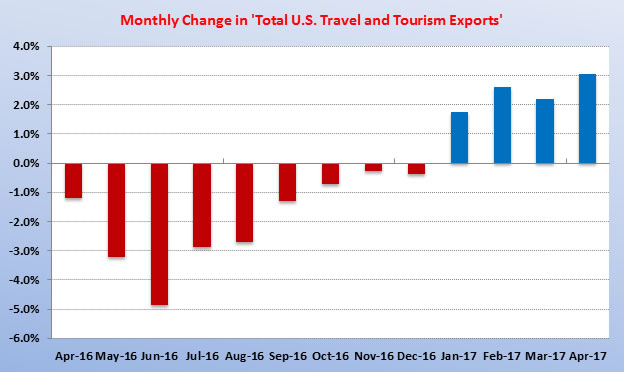 The National Travel and Tourism Office (NTTO) recently announced thatinternational visitors spent an estimated $20.8 billion on travel to, and tourism-related activities within, the United States during the month of April, an increase of more than 3 percent when compared to April 2016. Passenger fares remain the only downward pull on total travel and tourism exports, but are now declining at a decreasing rate-down less than half a percentage-point when compared to the same period last year. As fuel prices continue to gravitate upward, so, too, should passenger fares receipts from international visitors and these fares will once again contribute favorably to our balance of trade.

International visitors have spent more than $83.4 billion on travel and tourism-related goods and services year to date (January 2017 through April 2017), an increase of nearly 2.5 percent when compared to 2016. Put simply, the United States has thus far enjoyed more spending from international visitors in 2017 than during any other period in history.

About National Travel and Tourism Office