TripAdvisor and Google Going Opposite Directions?

Home/TripAdvisor and Google Going Opposite Directions?

TripAdvisor and Google Going Opposite Directions? 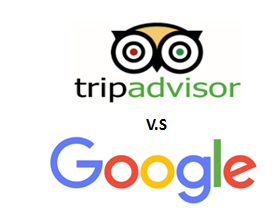 Metasearch has been a trendy topic lately in one way or another. First, with the constant reports of TripAdvisor’s Instant book disaster or that Google wants to take over the travel industry with their recent changes or even Booking.com shifting their budget from performance marketing (Google Ads and mainly metasearch) towards TV ads.

TripAdvisor, as you all know, is the biggest travel website there is, with over 450 million monthly visitors. A few years back, TripAdvisor decided to become a price comparison website – displaying prices for individual hotels from online travel agencies, hotel chains and even independent hotels. For TripAdvisor this was a huge success as all advertisers shifted large chunks of their advertisement budget to TripAdvisor as a channel and other metasearch players to avoid relying so much on Google organic and paid search.

Following the momentum build, they deployed their instant booking commissionable option, competing against their biggest advertisement spenders (Expedia and Priceline groups). That’s when things started to go south for them. Like they say, don’t bite the hand that feeds you.

At the same time instant booking was not picking up and definitely not convincing the end users despite the TV ads – OTA’s started pulling back in advertising spend – hurting TripAdvisor’s bottom line, to focus on their own channels and reduce their dependency on third parties.

What could they have done better? In my opinion – The Google Adwords/Sponsored ads strategy would have been the ideal for TripAdvisor. The TripAdvisor platform should have been accessible to all hotels with the features available to the OTA’s (logo’s, discounts, promos etc..), something that the current TripConnect platform doesn’t allow the independent hotel’s to do. The lack of focus on TripConnect as a platform has stopped independent hotels from really investing in a channel where traffic is significantly more qualified than any other. The influx of new players, but mostly the hundreds of thousands of independent hotels, would have been a better option for everybody. For TripAdvisor, the increase in competition would have had a positive impact on CPCs and their revenue; for hotels, having access to an additional channel that helps them generate direct bookings where they can decide their own budget. And of course for the consumer, giving them more choice, more pricing options and better deals.

These days, Google is making strong moves and taking over the metasearch scene, which has previously been dominated by TripAdvisor – Is Google hotel search going to fail where TripAdvisor and many others have? As stated recently, Google is very aware of the mistakes that others have made in the past.

Google’s biggest opportunity or threat, depending on how you look at things, is the ability to combine the data they collect from hotel searches with their other services – Google Adwords and the display widely adopted by all hotels of all sizes. It most certainly seems like they are moving in that direction! One thing is sure, they are in it to dominate the travel sector.

Swell has helped luxury hotels and resorts improve their marketing campaigns and their website's performance through an integrated approach. Taking in consideration all the variables that impact a hotel's performance (seasonality, occupancy rates and pricing strategy). Working closely with revenue managers and the hotel's marketing team to achieve the best possible results.