It is our great pleasure to present the third edition of the Trends and Opportunities South America, an annual publication by HVS/Hotel Invest (in partnership with STR) that illustrates and analyzes the sector’s performance in some of the major markets in the region.

Every year we provide recent and reliable information in addition to telling you about the challenges and opportunities in South America’s main hotel markets. We are convinced that an informed and transparent market is more solid and professional. Having said this, we believe that this publication will increasingly become a key tool for hoteliers, developers, and investors by supporting them to properly formulate their business and investment strategies.

If you wish to receive this publication and other news from HVS/Hotel Invest, please visit our websites (www.hvs.com and www.hotelinvest.com.br) and follow us on LinkedIn (HVS| HotelInvest). For further information, questions, comments or suggestions, please contact Cristiano Vasques – São Paulo, (55 11) 3093-2743, [email protected] – or Fernanda L’Hopital – Buenos Aires, (54 11) 5263-0402, [email protected].

The Report’s broad database mostly comprises data from STR, supplemented by HVS/HotelInvest own records and data provided by third parties. We thank all those who have contributed to this publication and we invite new hotels, operators, and associations to share their data through STR for future editions, contacting Patricia Zulato: (55 47) 99201-7002, [email protected].

The information contained herein is based on the performance of 80,665 rooms using data on average daily rates in nominal value and national currencies, and includes the main hotels in each segment of each city. We are therefore certain that the trend indicators truly reflect what is happening in each market universe.

Our annual comparisons use the same sample base throughout the historical series, except when there are openings or significant segmentation changes. Our wide sample plane is statistically significant and is shortlisted below:

2015 and 2016 were marked by low economic growth in South America. The international backdrop for this poor regional performance included the global economic slowdown and the drop in the price of commodities, which affected the raw-material exporting countries. In addition to these external events, there were some regional factors such as new presidents taking office, plus bad administrations, in some cases, and the inability to strengthen the institutional framework and fight against corruption. Although all the countries in the region, except for Peru and Paraguay, evidenced a slowdown, the regional recession is accounted for by the internal crises of Argentina, Brazil, and Venezuela. The good news is that a change of trend is expected in 2017. On the one hand, most of South American governments are shifting from the left to the right, with the implementation of reforms aimed at balancing the economy and improving the business climate, which should lead to greater economic growth. On the other hand, brighter prospects for the regional and global scenarios, higher raw material prices, and government investment plans should favor the South American economies. The United States withdrawing from the Pacific Alliance might encourage the creation and strengthening of regional blocs, with a positive impact on its members.

In Argentina, the first year of Macri’s administration set a change in the country’s economic direction. In 2016, despite the drop in GDP, major economic adjustments were implemented to start balancing the economy. Although there are pending reforms and challenges to be solved, positive signs have already appeared as well as an improvement in confidence levels and in the institutional and business climate. This together with a more favorable global and regional scenario will reset the country on the growth path in 2017.

In Chile, despite the drop in copper prices, Brazil’s recession (a major business partner), and business discontent due to government reforms, the GDP went up by 1.7% in 2016, which shows the country’s economic soundness. Economic activity is forecast to accelerate in 2017, encouraged by higher copper prices and more favorable prospects for China, the United States, and Brazil.

Colombia suffered from increased economic slowdown in 2016, mostly as a result of lower crude oil prices, accompanied by concerns about the country’s fiscal deficit and a rise in inflation. However, toward the end of the year, Congress passed a tax reform bill aimed at increasing tax revenue and helping the country keep its credit rating amid a slump in oil revenue. This, in addition to progress over the peace agreement with FARC, prospects of crude oil and farm product exports picking up, an increase in industrial production, plus more investments in infrastructure, account for greater growth projections in 2017.

Peru was the star of the region. Although the country’s presidential elections, whose winner was the pro-market candidate Pedro Pablo Kuczynski, prevented greater growth, Peru’s economy showed an attractive 3.9% expansion in 2016. This was possible thanks to an increment in traditional exports and to the recovery of the manufacturing sector. The local economy is expected to expand even more in 2017.

In Brazil, high unemployment, credit restrictions, political unrest, and weak external demand caused the economy to drop again in 2016. The new government has implemented a series of reforms that are showing the first signs of economic stabilization. There are moderate growth prospects for 2017, and the economy is expected to accelerate in 2018.

Opportunities and challenges for the hotel industry

Even if the regional outlook was not too encouraging in 2016, the countries in question attained marked increases in the number of foreign tourist arrivals, with the exception of Argentina and Brazil that had a slight decrease due to their recession. In terms of hotel demand, all the cities analyzed here, except for the Brazilian ones, showed an uptrend, especially Bogota. Some markets were affected by hotel openings, particularly Rio de Janeiro, in addition to Curitiba and Belo Horizonte, which caused a drop in occupancy and, in most cases, in rates as well.

Although hotel supply will increase in some cities in 2017, the uptrend is expected to continue in line with the projected economic acceleration and the consolidation of destinations. This will contribute to a rapid reabsorption of supply and help several cities and segments keep attractive occupancy and average daily rate levels.

Having overcome uncertain times and with significantly lower risk, South America will grow again in 2017. This, in addition to the historical performance of the past 10 years, indicates good possibilities for the hotel industry in the region. Some of the current opportunities (many of which have been in place since the last edition of Outlook) are: 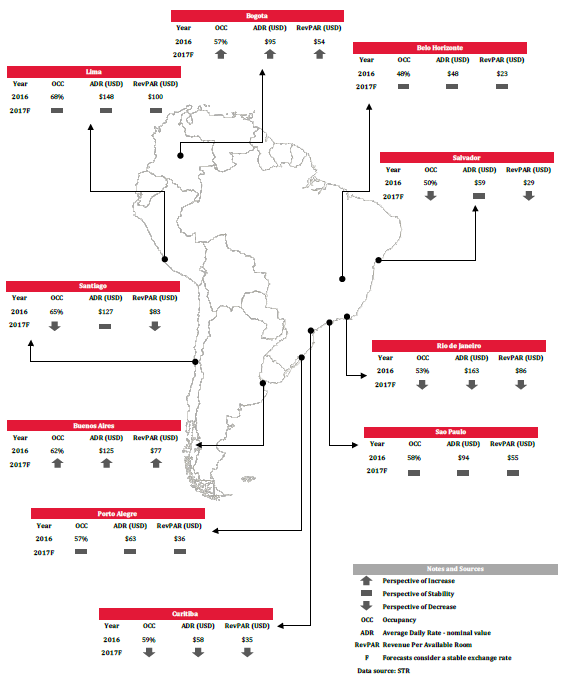 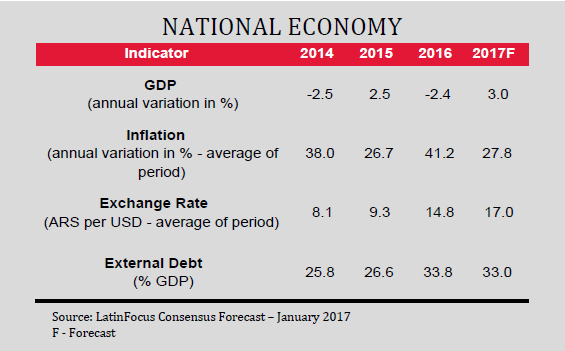 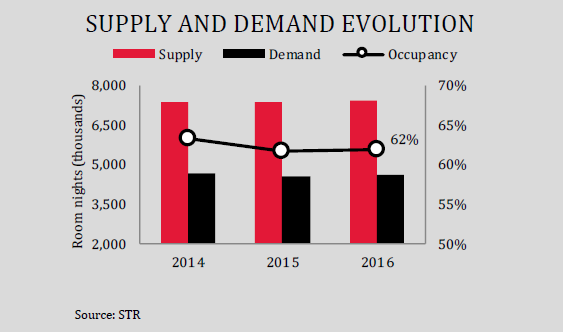 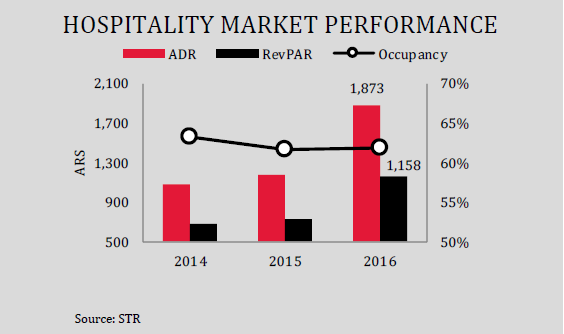 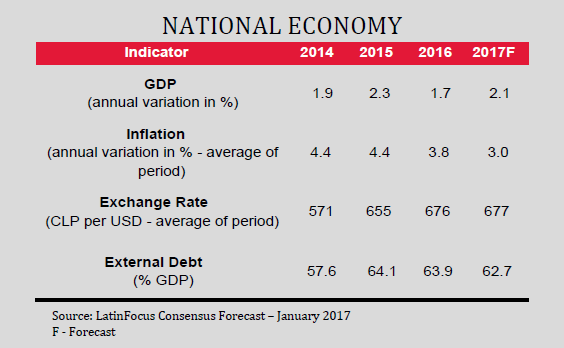 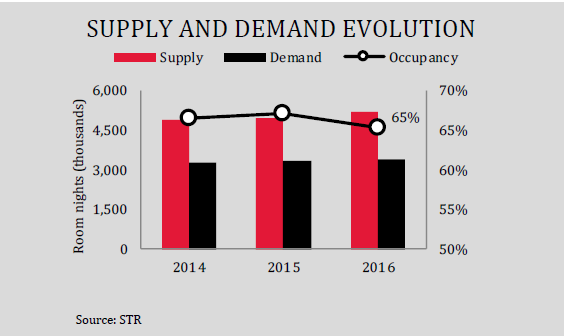 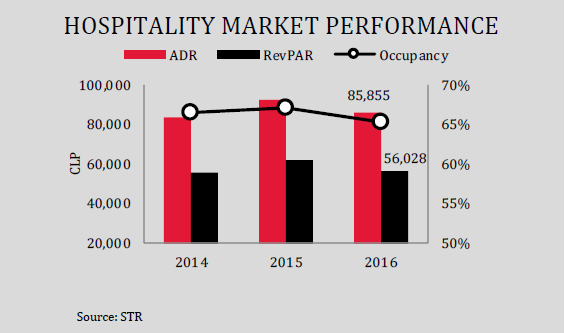 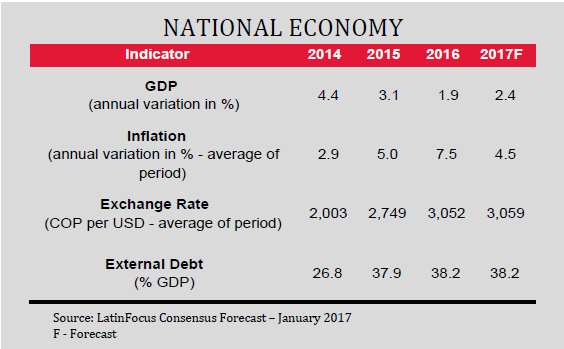 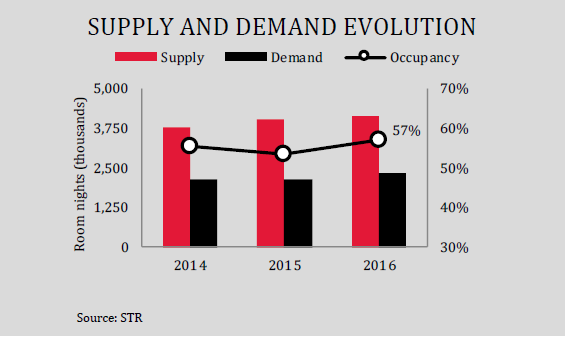 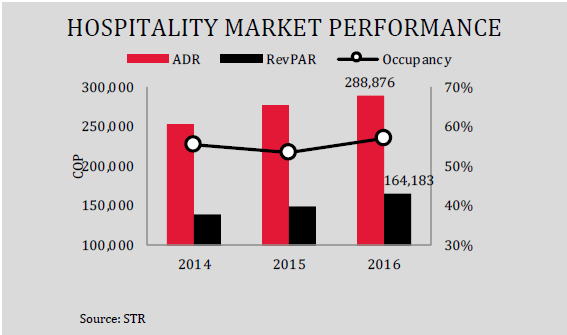 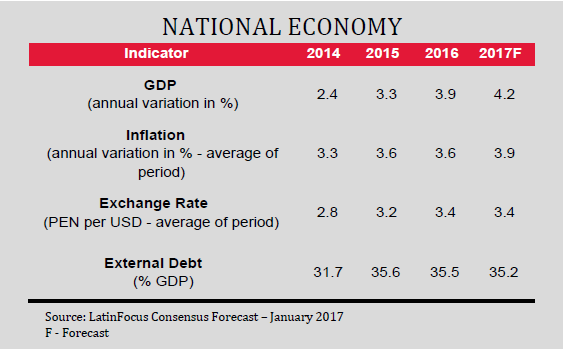 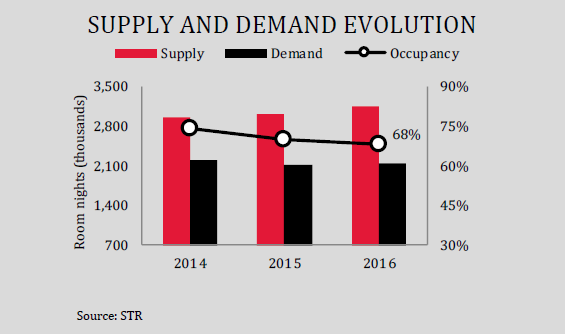 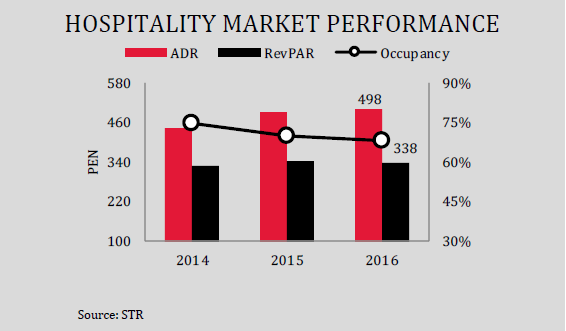 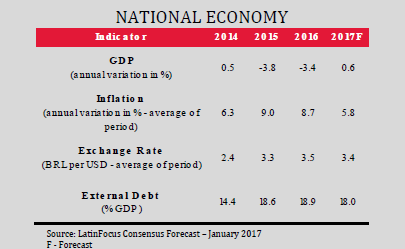 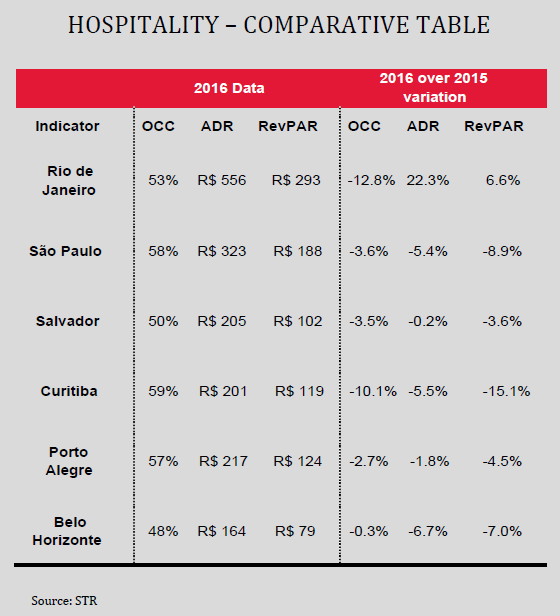 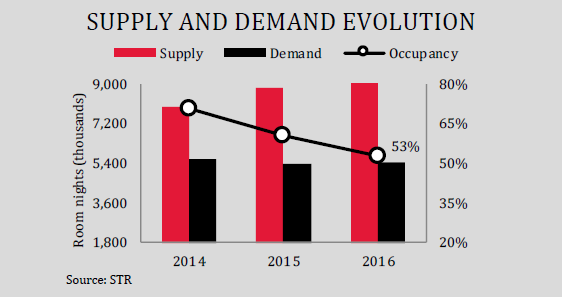 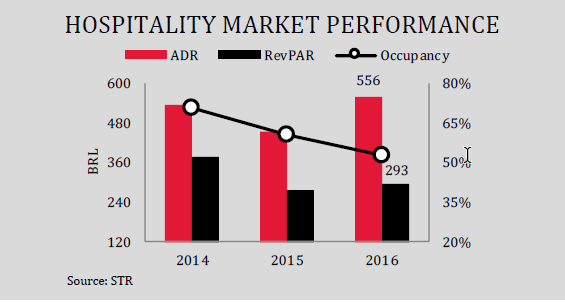 São Paulo Without new supply, recovery will be faster than in other markets 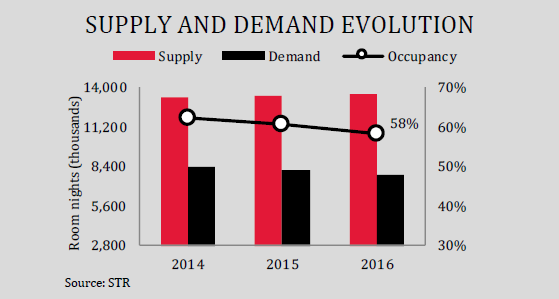 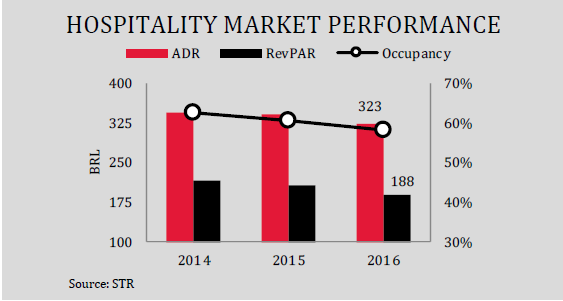 Salvador Another year of demand drop in the city 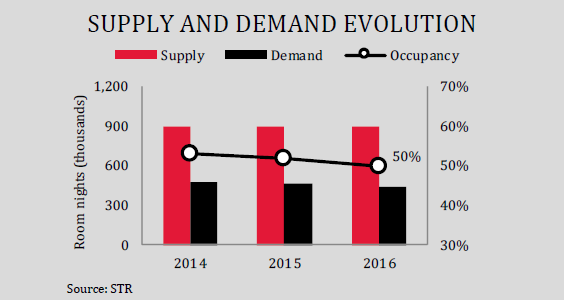 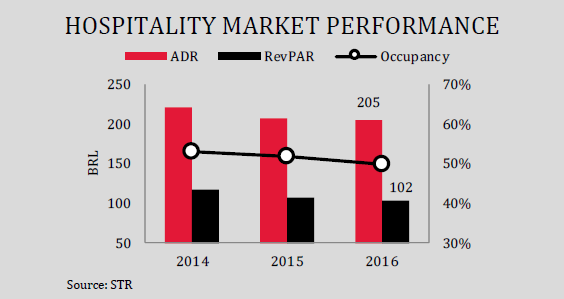 Curitiba In a year of crisis, hotels felt the opening of new projects 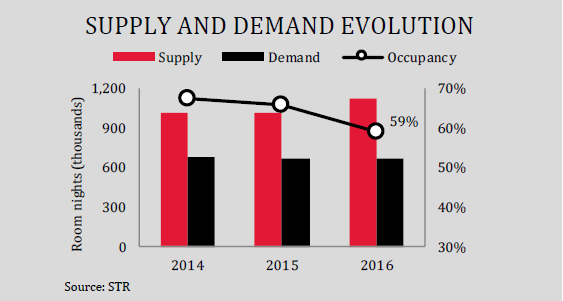 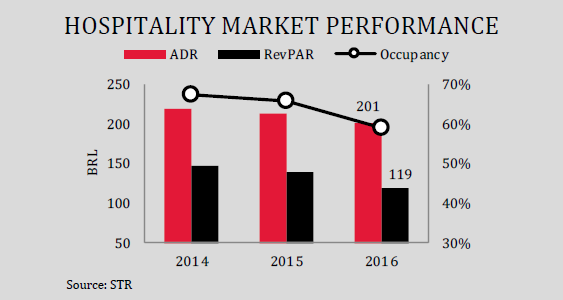 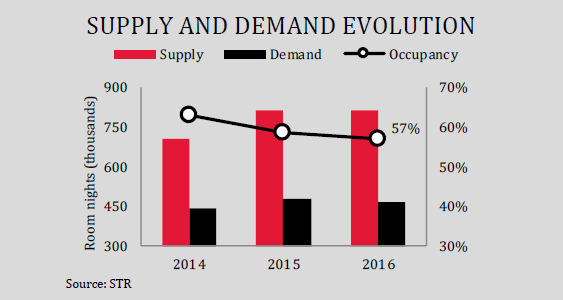 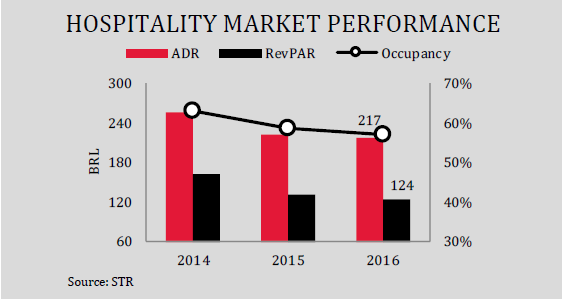 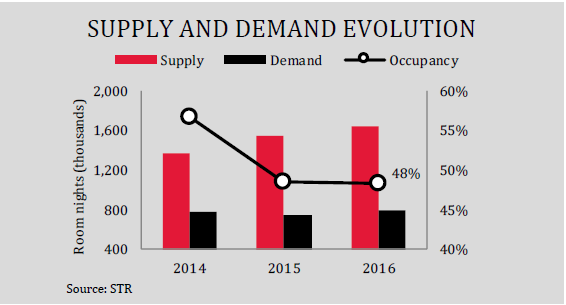 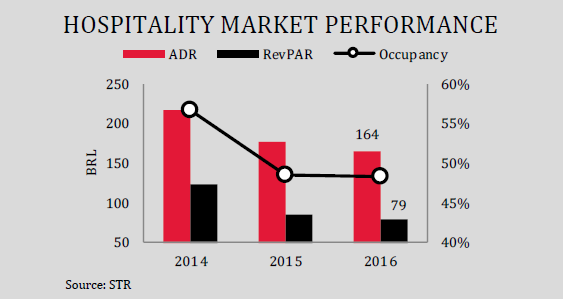 Onset of supply stability. After several years of significant increase in hotel supply, 2016 had fewer hotel rooms entering the market. The scenario indicates the beginning of stability given that there are few projects scheduled to open in the short term. Occupancy levels remained stable. However, with rates dropping due to strong competition, the RevPAR kept falling. Belo Horizonte is not ranked among the country’s major leisure travel destinations. With the country’s economy picking up and stable hotel supply, the sector’s performance indexes tend to recover. However, there is a need for local investment in leisure and event venues to increase the city’s attractiveness as a travel destination and thus accelerate the hotel segment recovery.

Cristiano has more than 15 years of experience in the Hotel, Tourism, and Real-Estate industry, conducting and supervising more than 250 studies for hotels and resorts throughout South America, Trinidad & Tobago, Angola, and Portugal. He worked for four years on tourism projects for HVS, coordinating the elaboration of regional tourism development plans financed by the Inter-American Development Bank (IADB). He is a permanent columnist for Hotelnews magazine and he has also published several reports on the tourism-real estate market and co-written the Brazilian Hotel Market Overview (HotelInvest / HVS). Cristiano owns the MRICS title from the Royal Institution of Chartered Surveyors (RICS), world leader entity in real state professionals qualification and has a Production Engineering degree from the Polytechnic School of the University of Sao Paulo (POLI-USP) and a post-graduate degree in Tourism and Hospitality Management from the Getúlio Vargas Foundation (FGV) and has also completed a Real Estate-Hotel Finance course at Cornell University. For more information contact Cristiano at [email protected]. 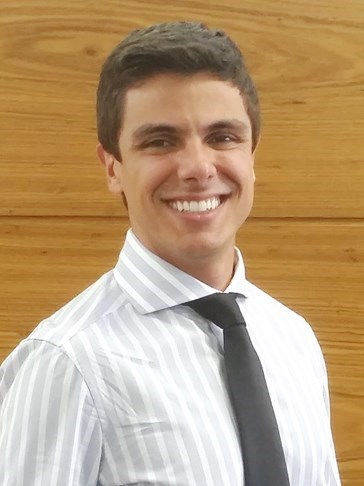 Pedro Cypriano, Consulting Director of HVS Sao Paulo, has extensive knowledge of the Latin American hotel market, as well as relevant experience in projects in Europa, Asia, and Africa. Over the past 10 years, Cypriano has been involved in more than 250 projects in global hospitality and tourism consultancies, and distinguished research institutes. As an executive of HVS, Pedro has led development plans for hotel chains, brand & management selection and contract negotiations, structuration of mixed-use complexes, business plans for investment funds, as well as hundreds of market studies, valuation and feasibility analysis for hotels and resorts. He is the author of the book "Hotel Development in Brazil: market overview and perspectives", published by Senac, and guest panelist of leading universities. Pedro has a MBA from Insper Business School, a Master degree in Hotel Development from University of Alicante (Spain), a specialization in Finance from Saint Paul Business School and a Bachelor degree in Tourism from University of Sao Paulo (USP). Contact: [email protected]. 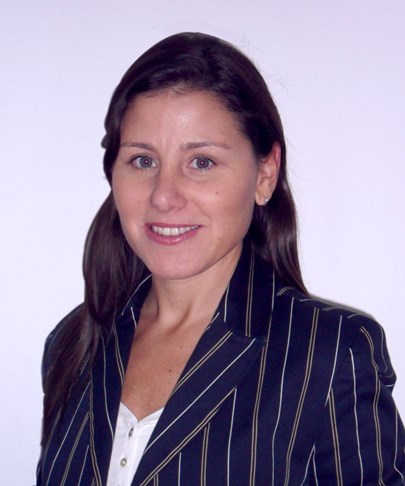 Fernanda L’Hopital - Associate Director of HVS, has dedicated half of her 14-year professional experience to hotel consultancy. Fernanda has in-depth knowledge of the tourism, hospitality and related-real estate markets in South America. During her career in the hotel industry she has conducted more than 200 studies and has gained plenty of experience in performing market research, feasibility studies, strategic planning, business plans, development plans, highest and best use studies, operator search, management and franchise contract negotiation, and valuations for hotels and other real estate projects. Her regional experience is mainly built on her thorough work in countries like Colombia, Peru, Chile, Argentina, Ecuador, Uruguay, Bolivia and Paraguay where she has worked both on operating and developing hotels and other real estate projects. Fernanda has a Bachelor degree in Economics from Universidad de Buenos Aires and a Master in Business Administration from Universidad del CEMA. For more information contact Fernanda at [email protected].

Critical Components of an Effective “Order to Appoint a Receiver” – From the Lender’s Perspective
Hotel Cleanliness Policies in the Time of COVID-19
Hotel Investors Across Europe Have ‘Wall of Money’ and Confidence in the Sector’s Ability to Recover, Hears Webinar
Hotel Owners Should Think Like Institutional Owners in the Post-COVID Era
Las Vegas COVID-19 Pandemic Update
Mid-Market Hotels to Lead the Indian Hotels Sector Revival Story
Multi-Year Recovery Along With New Opportunities for the Travel and Hospitality Sector, Predicts HVS Global Leadership
Economy Extended-Stay Hotels Hold Up Best During Q2 2020
Israel Set to ‘Bounce Back’ From Pandemic as Lessons Have Been Learned Before, Hears Webinar
Federal Per Diem: Fiscal 2020/21 & Historical Trends
Improving Hotel ROI – Thinking Out of Box From Design to Operations
Navy Pier Closure: A Cause for Concern?
Why Professional Asset Management Adds Value to Hotel Investors?
Middle East Hotel Construction Pipeline Continues to Show Signs of Decline* at Close of Q2 2020
A Deep Dive into Wellness Hospitality
Quality Hotel Supply Is the Key to Developing Fledgling Tourist Destinations
How Hotel F&B Pivoted in Response to COVID-19, and What the Future Holds
Opening New Revenue Streams in the Hospitality Sector
Israel Hotel Market Overview 2020 – The Path to Recovery
The Changing Landscape of the Recruitment World