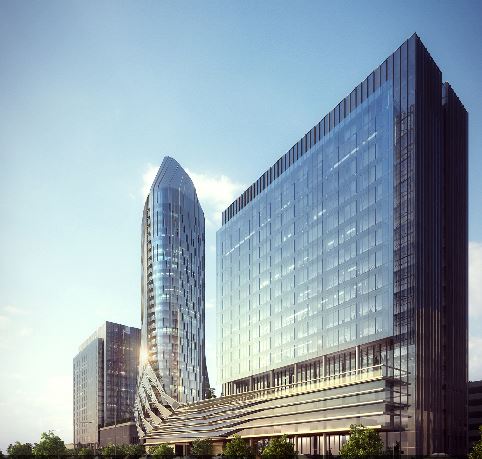 We are thrilled to partner with Langham Hospitality Group to introduce the prestigious five-star Langham Hotels & Resorts brand to North Texas, says Stan Thomas, president and CEO of Thomas Land and Development, owner and developer of Wade Park and the hotel. This hotel will be a centerpiece for Wade Park, surrounded by high-end restaurants, retail, entertainment, offices and residential — built for a new generation, with a luxurious, metropolitan design and amenities for both locals and travelers alike. From the well-appointed, spacious guest rooms and meeting, convention and wedding spaces, to the rooftop pool deck and event lawn, to the Chuan Spa, this will be the areas premium urban resort.

The projects progressive high-rise architectural design, by 5G Studio Collaborative in Dallas, will be sleek and modern with a total of up to 35 floors, including up to 25 hotel floors and 10 floors of planned residential. Plans for The Langham Hotels & Resorts luxury hotel at Wade Park feature:

This project in Texas will play a key role in our group’s expansion in the United States,” says Robert Warman, chief executive officer of Langham Hospitality Group. We are delighted that we may introduce our Langham service values to this thriving destination and provide a new, exciting luxury hotel experience for our loyal guests.

Were honored Langham Hospitality Group chose Frisco to bring its first hotel in Texas, says Mayor Maher Maso, City of Frisco. Tourism and convention business help us meet our long term goal of becoming a sustainable city, which is important as one of the fastest growing cities in the nation. This upscale development will provide a high-end hotel experience for our visitors and guests, not to mention luxurious living and job opportunities for our residents. We look forward to working with Langham and its team.

In addition to acclaimed hotels throughout Europe, the Middle East, Asia and the Pacific, Langham Hotels & Resorts have a strong presence in North America with award-winning luxury hotels in Chicago, Boston, Los Angeles and New York. This new location, which is expected to open at Wade Park, will be the brands first hotel in the southern / southwest region of the U.S.

As the wholly-owned subsidiary of Great Eagle Holdings, Langham Hospitality Group encompasses a family of distinctive hotels under The Langham Hotels & Resorts, Cordis and Eaton brands that are located on four continents. The Group takes its name from the legendary The Langham in London which was widely recognized as Europe's first Grand Hotel. For almost 150 years, this flagship hotel has represented sophisticated and gracious hospitality, a philosophy that reflects elegance in design, innovation in hospitality, genuine service and captivation of the senses across all properties. For reservations, please contact a travel professional or access the website at www.langhamhotels.com.

Thomas Land & Development, LLC is a visionary commercial real estate development company that specializes in creating dynamic places where commerce, life and leisure intersect. Capabilities encompass master-planned communities and mixed-used projects, as well as retail, hotel, residential and office developments. The company is involved in multiple projects across the nation, creating environments that appeal to consumers, communities and municipalities, and position properties for long-term success. Founded in 1987 and headquartered in Newnan, Ga., just south of Atlanta, privately held Thomas Land & Development has developed more than 20 million square feet of retail property valued at $2 billion, plus controls over 22,000 acres of prime, developable land throughout the United States.

About The Langham brand

The Langham brand is the embodiment of the sense of enchantment fostered by the original 'Grand Hotel' - The Langham, London. Much of what exists in each of our hotels today bears the hallmarks of what made our first hotel so special. We were at the forefront of creating new hospitality experiences back in the 19th century, and we remain so today. Our luxury hotel group exudes a graceful and tim eless elegance, presenting classic themes accented with personality... and a certain quirky charm. Our staff engages guests with a natural finesse that bears the seal of our heritage: always anticipating their needs, but never obtrusive. Indeed, The Langham family of luxury hotels offers each guest an experience of impeccable hospitality, handcrafted and refined for over 140 years.