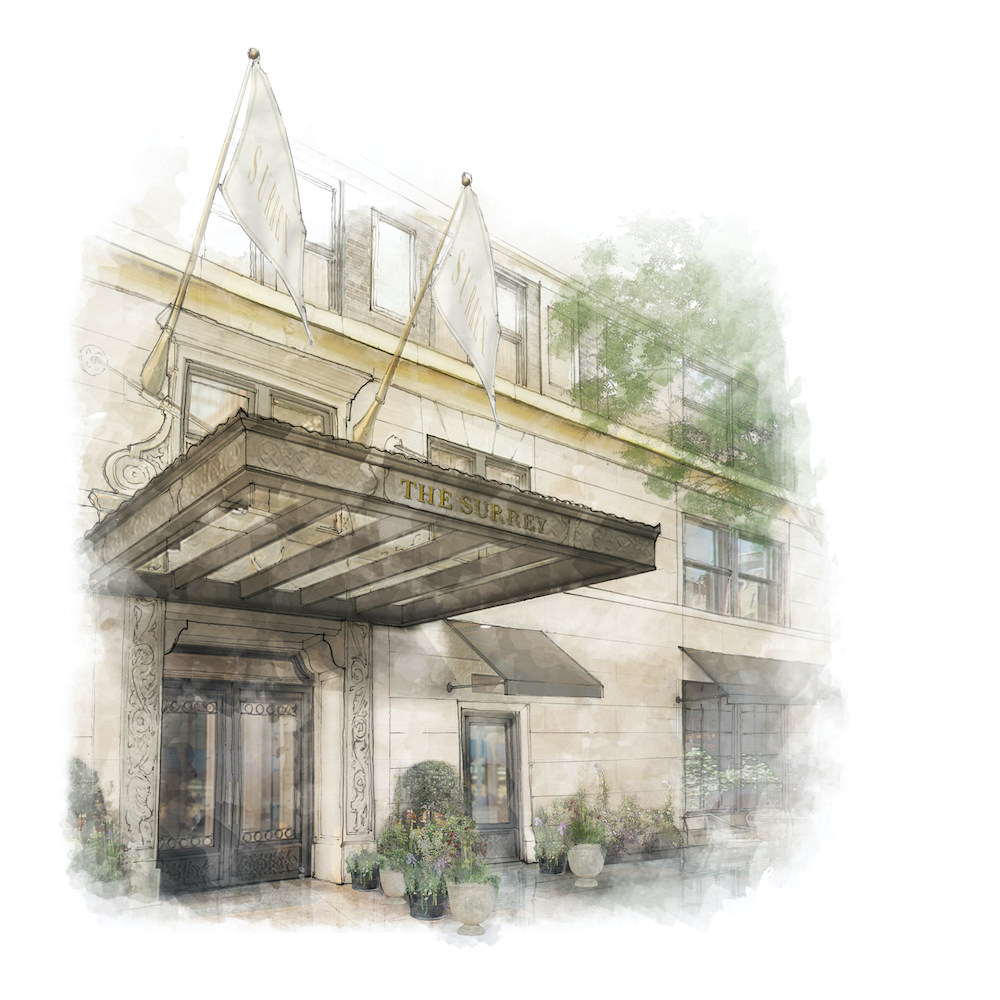 NEW YORK – May 5, 2021 – Luxury Upper East Side hotel, The Surrey, was acquired by Reuben Brothers in 2020, marking another milestone for their growing hospitality collection. Undergoing an extensive transformation, the hotel is slated to reopen in early 2023 as The Surrey, a Corinthia Hotel, operated and managed by Corinthia Hotels, a collection of individually-designed and distinctive five star hotels located in some of the most exciting destinations across Europe and the Middle East, and now North America. The Surrey, a Corinthia Hotel will mark the Corinthia group’s first property in the United States and a second collaboration with Reuben Brothers, the global private investment firm founded by David and Simon Reuben. The consortium will partner with Casa Tua on the hotel’s food and beverage offering, bringing the Miami Beach hotspot and treasured celebrity favourite to New York for the first time.

On The Surrey, a Corinthia Hotel, Jamie Reuben commented: “Since our recent acquisition of the property, we have been looking for the right partner who shares both our passion and our vision of reinvigorating one of New York City’s most famous hotels.  We trust the Corinthia brand, with whom we have also partnered with on another notable project in Rome, to deliver a current and innovative hotel proposition with an uplifting guest experience, while rejuvenating the properties to their former, historic grandeur.”

“Having a presence in the United States has been a goal for Corinthia for many years, especially in New York, a city that we consider one of the most vibrant and exciting places in the world,” stated Simon Naudi, CEO of Corinthia. “We look forward to working closely with the Reuben Brothers to restore The Surrey to its former glory in time for its 100th anniversary.”

The hotel will introduce a number of unique new dining destinations to the area, including Casa Tua’s renowned private members’ club, as curated by Miky Grendene. Founder of Casa Tua – the restaurant, hotel and private club on Miami Beach, with further locations in Aspen and Paris and Italian kitchen, Casa Tua Cucina – Miky said of the collaboration with The Surrey, a Corinthia Hotel: “We are very excited to bring Casa Tua to New York and most importantly to establish a close relationship with Corinthia and the Reuben Brothers.  We feel there is great synergy between us and together our intention is to create one of the most glamorous and exciting spaces in the city. My main goal for The Surrey, as with all of my properties, is to bring unbelievable energy and soul to a landmark and truly make it feel – as our name suggests – like your home.”  Casa Tua promises to offer guests authentic cuisine and a special ambience to deliver a truly memorable experience.

Situated at the corner of East 76th Street and Madison Avenue, steps away from Central Park, The Surrey, a Corinthia Hotel will comprise both rooms and residences and draw inspiration from its illustrious history and elegant surroundings. The thoughtful design of the 97 guest rooms – including 33 suites and five signature suites – and 12 luxury residences will all be overseen by award-winning studio, Martin Brudnizki. ‘It is a privilege to work with a landmark hotel such as The Surrey. We look forward to adding to the legacy of this iconic building and translating the combined vision of the Reuben Brothers and Corinthia Hotels to create a new and exciting destination for the Upper East Side.” said Brudnizki.

From presidents and royalty to actors and musicians, The Surrey has been a part of New York City’s skyline and recognised for its exceptional, discreet service since it was built in 1926, beloved by both New Yorkers and visitors alike.  Under new ownership and management, it will once again become an enchanting Upper East Side destination, signifying a collective commitment to New York City and the hospitality industry post pandemic.

ABOUT THE REUBEN BROTHERS

The New York acquisition is the latest addition to the Reuben’s existing pipeline of hotel investments and developments in the UK and Europe, including in Rome and Venice, Italy, Verbier, Switzerland, and in London Grosvenor Square Mayfair, The “In & Out Club” on Piccadilly, Great Marlborough Street in Soho and the Curtain Hotel and Members’ Club in London’s East End.  [email protected]

A lifestyle brand created with heart, Casa Tua is a true one-of-a-kind experience promising authentic cuisine, elegant design, impeccable service and amazing company. Founded in 2001 by Italian-born visionary Miky Grendene and his wife Leticia Herrera-Grendene, Casa Tua’s flagship property, nestled in a historic villa in the heart of Miami Beach, is proud to house Miami’s first private member’s club, a landmark restaurant and boutique hotel.  Casa Tua’s second home in Aspen is an incarnation of the classic Casa Tua concept, tucked away in an intimate mountain chalet that is rustic, yet impossibly elegant. The opening of Casa Tua Cucina at Saks Brickell City Centre in 2017 marked the brand’s first open Italian kitchen – and Saks’ first food concept in the U.S – offering ten stations of curated food, beverage and retail items in a setting drawing its inspiration from the heart of the home: the kitchen. In 2020, Casa Tua opened their first international destination, with Casa Tua Paris inside the new J.K. Place Hotel on the left bank.

Corinthia is a growing family of uplifting, luxury hotels. Founded in Malta in 1962 by the Pisani family, the company has grown over the years into a multinational investor, developer and operator of hotels and real estate. Its portfolio includes award-winning hotels in cities such as London, Budapest, Lisbon and St. Petersburg. Current developments underway in various stages of design and construction include landmark, trophy hotels in Rome, Brussels, Bucharest, Moscow, Dubai and Doha. More information at corinthia.com and ihiplc.com. View video of The Surrey, a Corinthia Hotel here.