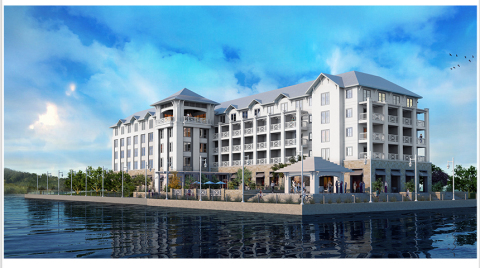 PANAMA CITY BEACH, Fla. – The St. Joe Company (NYSE: JOE) (“St. Joe”) and the City of Panama City, Florida (“the City”) execute a long-term land lease to bring a new hotel and restaurant to Panama City’s downtown waterfront district. Under the terms of the lease St. Joe will lease a City-owned parcel to develop, construct and operate a waterfront hotel and standalone restaurant on a portion of the Panama City Marina property fronting beautiful St. Andrews Bay, which has a deep water channel to the Gulf of Mexico.

This agreement comes after nearly two years of planning, discussions and public meetings between St. Joe, the City and local residents. St. Joe initially expressed interest in the project in September of 2018 in a letter to the City and reaffirmed that interest in November of that year after Hurricane Michael, a Category 5 storm, caused significant damage to the City’s downtown district. In the time since, St. Joe has held four public events to gather feedback and share conceptual plans with local residents. “We believe that a vibrant downtown with a mix of residents, shoppers, businesses and visitors benefits the community as a whole,” said Jorge Gonzalez, President and CEO for St. Joe. “We are making this investment in downtown Panama City with the anticipation that it can be a catalyst for other investments that over time, will make downtown Panama City a vibrant destination to live, work and visit.”

The hotel and restaurant represent the first step towards implementing the award-winning Strategic Vision for Historic Downtown created by renowned design firm Dover Kohl & Partners. The vision was adopted in 2019 following a community-led effort that included workshops, focus groups, town hall meetings and design charrettes. The vision documents can be seen at www.rebuildpc.org.

Current plans for the project include a five-story, branded hotel on the western portion of the marina property with an adjacent restaurant with outdoor dining. The purposed structures will offer guests sweeping views of the beautiful St. Andrews Bay. Plans also call for a public promenade along the property’s edge providing an ideal place to walk and enjoy the sites of the marina. Additional elements of the planned development include an event lawn and surface parking. None of the planned developments for the site will interfere with future marina operations.

“It has been very exciting to see private investment coming to downtown Panama City following Hurricane Michael,” said Greg Brudnicki, Mayor of Panama City. “The marina is a tremendous asset to the people of this community and we believe that this hotel and restaurant project will be a great complement to the plans that we have for the rebuilding of the marina.”

Once complete, the planned hotel and restaurant will be managed by St. Joe Resort Operations, LLC (“St. Joe Hospitality), a subsidiary of St. Joe that operates hotels, restaurants and other hospitality assets in Northwest Florida. The company has three existing hotels under management with an additional four hotels currently under development or construction and anticipates a fifth will break ground in the coming weeks.

St. Joe intends to announce the brand of the planned hotel at a later date. The company intends to break ground in the second quarter of 2021.

This press release contains “forward-looking statements,” within the meaning of Section 21E of the Securities Exchange Act of 1934, including statements regarding the proposed hotel and restaurant at the Panama City Marina property, including expected financing, management, site development and expected completion. These forward-looking statements are qualified in their entirety by cautionary statements and risk factors set forth in St. Joe’s filings with the SEC, including its Annual Report on Form 10-K for the year ended December 31, 2019, Quarterly Reports on Form 10-Q for the quarters ended March 31, 2020 and June 30, 2020 and subsequent current report filings, as well as the following: (1) the ability of St. Joe to construct and complete the proposed hotel and restaurant on the expected timeframe, or at all, and (2) the interest of prospective customers in a hotel and restaurant in Panama City, Florida.

About The St. Joe Company