The Role of Unemployment Benefits in the Current Labor Shortage

Home/The Role of Unemployment Benefits in the Current Labor Shortage

The Role of Unemployment Benefits in the Current Labor Shortage

An analysis of why and how Covid-related unemployment benefits may have impacted the current labor shortage. What role do loss aversion and behavioral economics play in how a worker considers losing benefits vs. gaining a job?

As Covid-19 cases in the United States started subsiding in the first half of 2021, the economy did not recover as fast as had been expected. There have been widespread reports about labor shortages in the U.S. since last April. The reason for the rising unemployment though is anything but a lack of jobs. According to the U.S. Bureau of Labor Statistics, monthly job openings hit 11 million last July, a record high since the pandemic swept through the world one year ago. Yet many companies are struggling to find workers to fill vacancies.

In the U.S., there was a job growth by 7.4% on average for seven straight months since last January, but the  unemployment rate was still higher than pre-pandemic levels (Figure 1). Workers also appeared lukewarm about rising wages and perks provided by companies to entice them back to work. A McDonald’s branch is paying potential burger-flippers $50 just to turn up for a job interview. The staffing crisis seems to be a paradox, because higher unemployment comes along with more job openings. 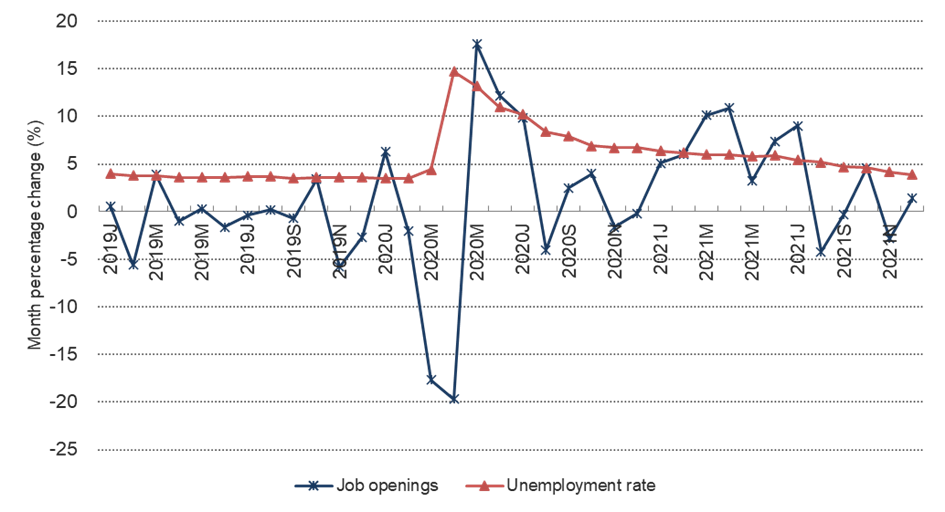 Figure 1. Job openings and unemployment rate in the U.S.

The impact on tourism and hospitality

The labor shortage has drawn a great deal of attention among economists, because it affects when and the extent to which the economy can recover. If the labor shortage persists, the recovery of the economy would be hampered even after the pandemic is contained globally in the foreseeable future. More worrisome is the tourism and hospitality industry that relies on human mobility and interactions in service delivery. The industry cannot be fully automated using robots and the like, neither is it possible for a vast majority of frontline employees to telework, a viable solution that has fared well in other sectors of the economy during the pandemic. In fact, the tourism and hospitality industry is the most devastated by the labor shortage. The U.S. data show that the monthly change in employment in leisure and hospitality sectors is the most elastic to the impact of the pandemic (Figure 2).

Figure 2. Employment in various sectors in the U.S.

Why the labor shortage?

The Economist magazine outlines three factors that may have contributed to the labor shortage:

No doubt, concerns of health and safety would deter workers from work given that infections are staggering and the virus is still mutating. In industries such as health and hospitality where human interactions are imperative, infection risks are much higher. The displacement of workers between industries could explain why some sectors, such as financial and governmental sectors, face less shortage than hospitality and other service sectors do (Figure 2). Some low-skilled labor force is likely to switch from tourism and hospitality sectors to those industries where telework is possible. But such transition is likely to occur in the long run, because certain skills and training need to be acquired by the displaced employees before they can perform their new work efficiently.

Many analysts blame generous unemployment benefits that disincentivize workers from joining the labor force. Of course, many, if not all, behavioral changes, ranging from job seeking to tax evasion, can be attributed to economic incentives. Governments across the world have rolled out a variety of Covid-specific subsidies and unemployment benefits since the beginning of the pandemic. As early as April 2020, the European Union announced a support package of €540 billion for helping workers, businesses and member states affected by the pandemic. In March 2021, the U.S. congress passed a $1.9 trillion coronavirus relief bill, which would make $1400 stimulus payments per person to 90% of households, plus an additional $300 per week to those receiving jobless benefits. The unemployment benefits, along with other subsidies, seem too tempting for people to trade off for work.

Unemployment benefits: too generous to be good?

Yet the incentive theory does not provide a satisfying explanation for the labor shortage paradox. In fact, the paradox may not happen because labor demand and supply will eventually balance in the market. Firms’ demand for labor will eventually push up wages to a level that is high enough to entice workers. One could also expect that people are willing to resume work as soon as unemployment benefits are expired. This may not be the case either, or may not happen as fast as we expect to.

Even if generous unemployment compensation does matter, it is only part of the story. The incentive theory implicitly assumes a perfect tradeoff between unemployment benefits and wages. Namely, insofar as wages exceed unemployment benefits, people will substitute work for idleness, and hence unemployment will decrease. In the U.S., average weekly wages increased by 8.1% in 2020 compared to that of 2019, which tripled the preceding 10-year average growth. In leisure and hospitality sectors, average weekly wages increased to $479 in the first quarter of 2021 from $461 in 2019, an increase of 4%. This was in part due to minimum wages, which disproportionately benefited hospitality workers, and in part due to companies that raised wages to entice workers. Taking into account a wide of range perks, such as free meals and transport, provided by many companies amid the pandemic, the employment compensation is indeed tempting.

Behavioral economics and the paradox of unemployment benefits

The incentive theory can explain the labor shortage in the short run. Yet there is a catch in unemployment benefits. In the long run, unemployment benefits could backfire because they create a status quo or an endowment that people are reluctant to give up even if better alternatives exist. If we treat unemployment benefits and other similar subsidies as an endowment that people possess rather than an incentive they are offered, people would respond to it differently. Returning to work to earn wages simply means surrendering the endowment, which is painful. This could help us understand why the labor shortage paradox is not a paradox at all, but a consistent behavioral bias that can be predicted.

In 1979, psychologists Daniel Kahneman and Amos Tversky published a paper titled Prospect Theory, in which they expounded the idea of loss aversion. Loss aversion has become one of the foundations of behavioral economics ever since. In fact, people don’t treat the same outcome symmetrically, depending on whether it is framed as a loss or a gain. Put into context, loss aversion suggests that the pain caused by giving up, say, a $1000 unemployment benefit outstrips the pleasure of earning a $1000 wage, if we ignore the drudgery of work. Yet in standard economic theory, people see them equal, at least they are assumed to in economic models, hence are indifferent between the two options.

In behavioral economics, a $1000 employment benefit is regarded as an endowment that people already possess, but a $1000 wage needs to be earned. If people switch to work to earn the wage, their subjective well-being will decrease despite the fact that the net wealth does not change. We value more what we have, less what we haven’t. From a psychological point of view, this is perhaps because we are emotionally attached to something we own, and once we lose it, it hurts more. According to prospect theory, people’s welfare actually decreases despite the two actions, a loss and a gain as being framed, cancel each other out in an economic sense. This could explain, other things being equal, why a higher than pre-pandemic wage is not even close to luring workers back to work.

The sense of well-being linked to gain

Because gains and losses from the same amount of money incentives have asymmetric impacts, employers have to pay more than they otherwise should to entice workers. This increases the social costs of employment. That being said, high wages only correct the negative impacts of unemployment benefits. Any policy that leads to a gain followed by a loss as perceived, social welfare would decrease even though net wealth does not change. Since unemployment benefits will expire anyway, a loss becomes inevitable, while relieving the grievance from the loss entails more resources. However, if people experience a loss followed by a gain with the same value, their well-being may increase because the loss lowers the reference point in the first place. If one loses his or her job which pays $1000 per month followed by obtaining the same amount of unemployment benefits, his or her well-being would increase. Upon losing a job, our reference point will be downgraded to unemployment without income. Thus, any earning not only results in a gain but can boost our well-being to a much higher level.

How High Labor Costs Are Taking a Toll on the Hospitality Industry
Meyer Jabara Hotels Offers Expert Advice on How to Better Manage Hotel F&B Amidst Today’s Labor & Supply Chain Shortages
Travel Recovery Means Protecting Your Labor
How Business Model Innovation Can Boost SMEs in Times of Crisis
Business Opportunities: Is the Metaverse the Right Way to Go?
The Hotel of the Future: Interview With GM About Technology in 2030
What Is Servitization?
Inclusivity Is the Key to Gender Diversity: Open the Door Please!
The Castell Project, Inc. Releases “Black Representation in Hospitality Industry Leadership 2022” Report
Leisure and Hospitality Still Biggest Unemployment Factor in New Jobs Report
Sustainable Business Practices vs. Business Recovery: HR in the Middle
How Will Hospitality Emerge From the Pandemic? Findings From EHL Research Day
6 Main Ethical Concerns of Service Robots and Human Interaction
How to Reposition Hotel Real Estate: A Methodology
Online Networking: How to Build Meaningful Interactions Remotely
What Makes an Effective Digital Marketing Strategy and How to Craft One
Revised BLS Data Paints Darker Picture for Travel Industry Losses, Need for Additional Aid
What Does ‘Metaverse’ Mean and What New Career Paths Might it Create?
Top 10 Global Spa Trends for 2022 Designed to Heal Mind, Body & Soul
3 Ways to Fix the Hospitality Labor Shortage & Welcome Back Employees