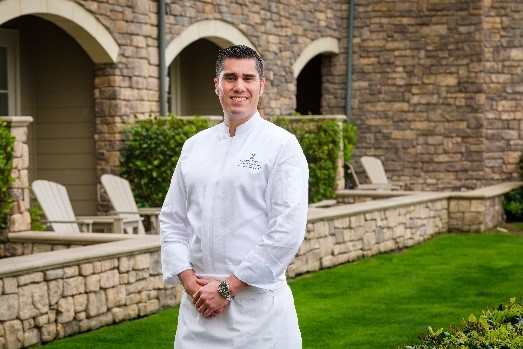 HALF MOON BAY, Calif. (June 17, 2022) – Forbes Travel Guide Five-Star award winner,
The Ritz-Carlton, Half Moon Bay, is pleased to announce the promotion of Roberto Riveros from Executive Sous Chef to Executive Chef. In his new role, Riveros will oversee all the resort’s culinary operations, including its restaurants, banquets, and in-room dining.

According to Chef Riveros, “This past year as Executive Sous Chef for The Ritz-Carlton, Half Moon Bay, I’ve had the opportunity to enjoy familiarizing myself with the rich agricultural bounty of the Northern California coast.” He continues, “Now, as Executive Chef, I look forward to working with my team to apply my own unique culinary imprint on the resort’s menus.”

As a matter of fact, Chef Riveros has already made a big impact on the resort’s culinary offerings prior to his recent promotion. For example, he is very focused on including local and seasonal products, prepared with his vanguardist technique that has been acquired over the course of his career.

With a passion for food and cooking since childhood, Chilean-born Roberto brings with him over 18 years of international culinary experience at world-renowned restaurants in Santiago, Barcelona and Hong Kong. As Chef de Cuisine at Ozone at The Ritz-Carlton, Hong Kong – named one of the “10 Best Rooftop Bars in the World” by Condé Nast Traveler – Roberto’s acclaimed tapas menus celebrated Asian, Spanish and Mediterranean cuisines. Inspired by his experience at Michelin star dining establishments, Roberto launched a chef-led Private Kitchen concept at Ozone, where guests enjoyed a personalized seven-course menu that matched the bar’s exceptional city views.

Prior to taking the helm at Ozone, Roberto spent six years at Three Michelin-Star Lasarte Restaurant in Barcelona, working under one of his greatest mentors Martin Berasategui, a Spanish Chef with 12 Michelin Stars in Spain, who taught him to respect and take special care of ingredients and that the guests should always leave happy. This evolved into Roberto’s own food philosophy of crafting dishes that are so well balanced and distinguished that they become a lasting memory for a guest. Roberto’s early culinary career also included Chef de Partie at Hotel Arts Barcelona and The Ritz-Carlton, Santiago.

About The Ritz-Carlton, Half Moon Bay

Situated 23 miles southwest of the San Francisco International Airport, The Ritz-Carlton, Half Moon Bay is a 261-room destination spa and golf coastal hotel. The Ritz-Carlton, Half Moon Bay is regarded as a top resort destination in the world and was most recently the recipient of the Forbes Travel Guide Five-Star Award 2022 and Travel + Leisure’s T+L 500 Award 2022. As the San Francisco Bay Area’s only oceanfront resort, it is perched atop a rugged bluff overlooking 50 miles of pristine California coastline. The timeless oceanfront estate provides guests with a relaxed yet refined experience for romantic getaways, meetings or special events. For more information or reservations call 800-241-3333, the hotel directly at 650-712-7000, a travel professional or visit ritzcarlton.com/HMB. Learn more about the destination at visithalfmoonbay.org.