The Problem Isn’t the Employee, It’s the System

The Problem Isn’t the Employee, It’s the System 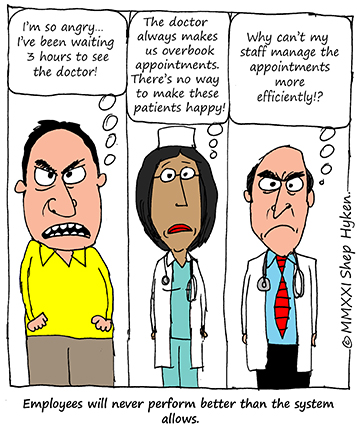 Here’s a true story shared by my friend and speaking colleague Beth Terry. The short version is that there is a doctor, who is probably a good doctor. But he’s a terrible boss.

When a patient – as in his customer – complains about something, he listens and then goes back to his employees, and in a knee-jerk reaction, he berates and punishes them by taking away their incentives. You can only imagine what that does to the morale of the team. And what happens next? The employees quit, which is understandable.

There are plenty of employee surveys that point to the number one reason people quit their jobs. Many people think it’s money, but it is actually due to a lack of appreciation from their boss.

It’s okay for a boss to be hard to work for. But the boss who has high expectations can still show appreciation and support employees. Receiving a complaint from a customer doesn’t mean it’s time to turn on your employees. On the contrary, it’s the time to sit down and find out why it happened. And here’s the interesting part. It’s usually not the employee’s fault. And it’s not the customer’s fault either. Most often, it’s the process.

Here’s a simple example. Let’s make the assumption that the doctor has hired employees who are friendly and competent. The doc is running behind and patients in the reception area are becoming impatient. One of them becomes angry and complains. This doctor doesn’t understand the real reason behind the delays, which are due to overbooking. Instead, he thinks the delays are due to poor management by the front desk personnel. Yet it is the doctor who insists they book – actually overbook – patients back-to-back.

When there is a problem, even if it appears to be the employee’s fault, you need to understand why it happened. If it’s related to an employee’s attitude, that is a coachable moment. Managed the right way you’ll get the employee back on track or you’ll quickly learn he or she needs to go to a different position – or another job in another company.

If it’s because the employee didn’t know what to do, then it’s simply a function of training, which is tied to your system or process. If employees aren’t properly onboarded and trained for their jobs, you can’t expect them to perform at their best.

Or maybe it’s just a bad process or system that needs to be fixed. This is something that needs to be discussed, managed and corrected. And here’s the interesting part of all of this. The late Dr. W. Edwards Deming, renowned professor, statistician and author, stated that 94% of problems are the fault of the system. People can’t perform better than the system allows.

So, in most cases, it’s not the people. It’s the system or process. If you work together with your people, you can focus your efforts on fixing what’s broken.

The “Always” Concept: What We Must Always Do for Our Customers
Applying the Science of Training to the Hospitality Industry
How to Cope in a Crisis
How to Resolve the Current State of Emergency in Hospitality Employment
3 Easy-to-Manage Guest Services That Can Boost Revenue
As Demand Returns for Groups and Events, Let’s Not Slip Back Into “Order-Taking”
Hospitality Financial Leadership – Zero Based Expenses
How to Say Yes – Every Time
Top 10 Global Spa Trends for 2021 Designed to Heal Mind, Body & Soul
Research Reveals Effective Social Media Crisis Communication Strategies During COVID-19 Pandemic
Customer Service Versus Customer Experience … What’s the Difference?
Hospitality Financial Leadership: How to Prepare the Annual Budget in 1 Hour
5 Tips to Outsmart Competition in the Post-COVID Hotel Market
Tourism Tidbits: Balancing Tourism Marketing and Security Needs
How to Handle Difficult Customers
Four Keys to Creating Your Own Hotel Sales Magic: Time to Become Unforgettable in Hotel Sales
Younger Travelers Are More Likely to Choose Accommodations With Inclusive Policies
Cyber Attacks Are Spiking – Is Your Hotel Prepared?
HR Analytics: How to Make Better Hiring Decisions
Hospitality Financial Leadership in Time of Crisis