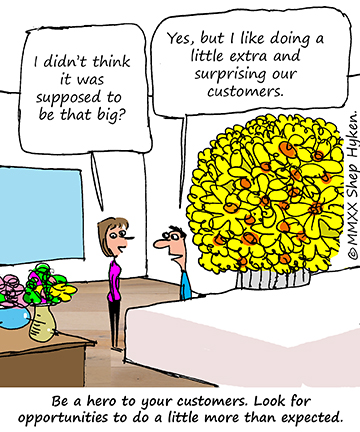 We’ve all heard the old adage: “It’s better to give than to receive.” That’s what customer service people do. They give and give and give.

They help solve problems and resolve complaints. What they get in return—hopefully—is a nice thank you, which, when you think about it, is fairly insignificant, though appreciated, for the work they do. Yes, they are paid for the job they do, but the people who are amazing at this role aren’t doing it just for the money. The opportunity to serve is fulfilling. They are customer service heroes.

This brings me to a story about Mike, a teenager I met back in the 1980s when I was still doing magic shows. Mike is a hero of sorts. He watched me do a show and came up to me afterward to talk. He was an amateur magician and wanted to “talk shop.” We chatted for a few minutes. He came back the next day to watch the show again, and we talked some more. After the show, I was heading to the airport and he asked if he could give me a ride. I took him up on his offer and we had a few more minutes to chat.

His car was old, and one might call it a “clunker.” He was just “a kid,” and probably didn’t have a lot of money, and that’s an important part of this story. When he dropped me off at the airport, the baggage handler came over to check my bags. I tipped him what I thought was appropriate and generous. Mike then reached into his pocket and gave him another $20.

As we said our goodbyes, I said, “Mike, you didn’t have to do that.” Mike replied, “It’s just money, and I’ll get more. He needs it more than me.” Here we are, 35 years later, and I remember that moment, which I call a Mike Moment. I have always tipped well because I know it is the right thing to do. However, when Mike said, “He needs it more than me,” I realized how fortunate we were, not just to have money, but to have the choice to give it away. It might be to a baggage handler at the airport, a server at a restaurant or an important cause or charity—it doesn’t matter. It’s about giving and not expecting anything in return. Mike is one of those unsung heroes who is fulfilled through the simple act of giving.

Back to customer service. That agent on the phone who takes the extra time to help answer a question or resolve an issue never brags about what they did for you, never expects a gratuity, or asks, “Aren’t you going to thank me?” They give a little extra because that is who they are. They are our customer service heroes. They are like Mike.

The next time you have an opportunity to do something extra for your customer, with no real agenda other than you want to do something nice for them, recognize that this is why people love doing business with you. They know you will always take care of them – that you’ll always be there for them. In your role, you are their hero!

The Difference Between Good and Great
The True Heart of Hospitality Is Human Kindness, Especially to Strangers
Good Intentions Can Be More Important Than Perfection
Another Lesson on How to Handle Angry Customers: Don’t Smell the Milk
Beekeeper Named ‘Best Employee App’ for Resorts World Las Vegas Deployment
The Top 5 Drivers of a Successful Company Service Culture
A Lesson from Michelangelo: Details Matter
Hotel Sales: When Product, Process, Place, and Price Are the Same, People Make the Difference
ALICE to Showcase Latest Advances in Hotel Staff Productivity and Guest Service With Unveiling of New Housekeeping Solution Features at HITEC Orlando
Visual Matrix Releases New Ebook Detailing How Hotels Can Future-Proof Their Property Management Systems
Feedback Narcissism
Is It Okay to Call a Customer or Employee Honey?
Answer the Question the Right Way
Would You Rather Clean a Toilet Than Call Customer Support?
Everyone Deserves A Compliment
The Most Important Employee in Your Business
How to Deal With Customer Complaints: The Perfect Thing to Say
The Day I Became a Customer Service Expert and Two Important Lessons
Inntopia and AZDS Launch Multi-Product Version of Popular RevRaise Booking Engine
Customer Service Is More Important Than Price