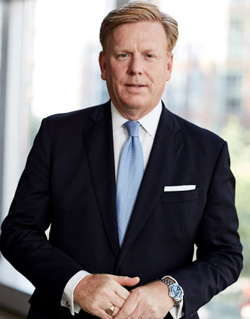 NEW YORK, N.Y. – October 25, 2017 – Conrad Hotels & Resorts, Hilton’s (NYSE: HLT) luxury hotel portfolio for the smart luxury traveler, today announced the appointment of Robert Rechtermann as general manager of The London NYC. In his role, Robert will oversee the day-to-day operations of the prestigious 562-key all-suite luxury hotel as the property undergoes a complete 18-month long renovation before it officially reflags as Conrad New York Midtown in spring 2019. Rechtermann brings an impressive 30 years of experience in the hospitality industry, primarily in the luxury segment, boasting an extensive background in hotel leadership and management.

“We are thrilled to welcome Robert as the new general manager of The London NYC as we begin the conversion to become Conrad New York Midtown,” said John T. A. Vanderslice, global head, Conrad Hotels & Resorts. “The London NYC represents a modern interpretation of luxury, and Robert is the perfect hotel ambassador to successfully deliver the smart luxury message during this transitional period. With his many achievements and successes in previous leadership roles, Robert will be an important addition to the hotel and integral component in solidifying the property as one of the premier hotels in New York City.”

Most recently, and for the past six years, Rechtermann served as the general manager of the Conrad brand’s flagship property in Manhattan, the 463 all-suite Conrad New York. As general manager of Conrad New York, Robert oversaw the hotel during its pre-opening and opening phase and successfully positioned the hotel as one of Manhattan’s top luxury hotels. Robert also served as general manager of The Peninsula New York from 2007 to 2011, where he directed a $35M refurbishment program which included 239 guest rooms and suites, a landmark rooftop bar and five-star spa. Under his leadership, both the hotel and spa achieved a Forbes five-star rating for the very first time. In 2006, he began his tenure with Peninsula as resident manager of the 339-room renowned Peninsula Hotel in Chicago that eventually led to his position as General Manager of The Peninsula New York a year later. Prior to his role at Peninsula Hotels, Robert worked for the Ritz-Carlton Hotels of Boston in various operational and food and beverage positions and Hilton Short Hills, Regency Hotel (NYC), Shutters on the Beach hotel in Santa Monica and the 392-room Long Beach Hilton in Long Beach, CA. Robert embarked upon his distinguished hospitality career at the legendary Waldorf Astoria New York holding key managerial positions in food and beverage including the areas of banqueting services and catering sales.

“I am truly honored to be appointed general manager of The London NYC and be given the responsibility of leading the property through an extensive renovation to be rebranded as Conrad New York Midtown,” said Rechtermann. “I am looking forward to the next chapter in my career and excited to have the opportunity to continue with the Conrad family and thrilled to be playing an integral role in the initial and ongoing success of this luxury property.”

The London NYC joined Hilton’s Luxury Brands portfolio on October 3, 2017 as an affiliate luxury hotel and will be reflagged in early 2019 as Conrad New York Midtown. This key midtown property is conveniently located on West 54th Street between 6th and 7th Avenues and is just steps away from many of midtown’s noted attractions and districts, including Carnegie Hall, Central Park, Fifth Avenue, Broadway and Times Square.

Robert holds a Bachelor of Science degree in hotel management from Fairleigh Dickinson University in Rutherford, NJ and currently resides in Connecticut with his wife and three sons.

Conrad Hotels & Resorts is the destination for the new generation of smart luxury travelers for whom life, business, and pleasure seamlessly intersect. Conrad offers its guests an innovative way to Stay Inspired through a curated collections of 1-hour, 3-hour, or 5-hour experiences, available through www.stayinspired.com or through the intuitive Conrad Concierge service via the Hilton Honors mobile app. Consisting of 32 properties across five continents, Conrad is part of Hilton, a leading global hospitality company. Connect with Conrad by booking at www.conradhotels.com. Learn more about the brand by visiting http://news.conradhotels.com or following us on Facebook, Instagram, and Twitter.

Hilton (NYSE: HLT) is a leading global hospitality company, with a portfolio of 14 world-class brands comprising more than 5,000 properties with more than 825,000 rooms in 103 countries and territories. Hilton is dedicated to fulfilling its mission to be the world’s most hospitable company by delivering exceptional experiences – every hotel, every guest, every time. The company's portfolio includes Hilton Hotels & Resorts, Waldorf Astoria Hotels & Resorts, Conrad Hotels & Resorts, Canopy by Hilton, Curio Collection by HiltonTM, DoubleTree by Hilton, Tapestry Collection by HiltonTM, Embassy Suites by Hilton, Hilton Garden Inn, Hampton by Hilton, Tru by Hilton, Homewood Suites by Hilton, Home2 Suites by Hilton and Hilton Grand Vacations. The company also manages an award-winning customer loyalty program, Hilton Honors. Hilton Honors members who book directly through preferred Hilton channels have access to instant benefits, including a flexible payment slider that allows members to choose exactly how many Points to combine with money, an exclusive member discount that can’t be found anywhere else and free standard Wi-Fi. Visit newsroom.hilton.com for more information and connect with Hilton on Facebook, Twitter, LinkedIn, Instagram and YouTube.