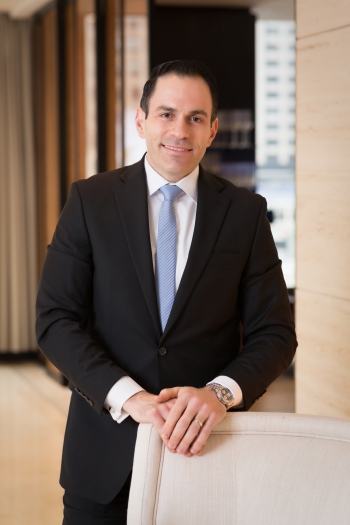 (CHICAGO, IL June 28, 2022) — The Langham Chicago, a Forbes 5 star luxury hotel in the heart of the city, announces the appointment of Anthony Zamora as General Manager. A seasoned hotelier, Anthony brings a wealth of knowledge and experience to the hotel as a longstanding and impactful team member of Langham Hospitality Group.

Anthony brings more than 20 years of experience within the hospitality industry, and is no stranger to The Langham, Chicago.  He was a key member of the opening team of the Hotel in 2013 and was an integral part of its incredible success, positioning it as the number one luxury hotel in the United States. In 2019, Anthony joined the Executive leadership team at The Langham Huntington, Pasadena, Los Angeles with the same goal of creating a culture of high performance luxury service at this historic 23 acre property.

He now returns to The Langham, Chicago to lead the team as General Manager. “I am thrilled to have the opportunity to return to The Langham Chicago, a hotel that means so much to me, as the General Manager” says Anthony. “It is an honor continue to grow my career with the Langham Hospitality Group, and I am eager and excited to rejoin the incredible team at The Langham Chicago and continue this iconic property’s legacy as a top luxury hotel in the world.”

Prior to joining in The Langham Hospitality Group family, Anthony was a highly regarded Executive Chef, having successfully opened the Conrad New York in 2011 where he helmed culinary operations for the hotel including the Conrad’s signature restaurant Atrio. Prior to opening the Conrad, in 2007, he joined the culinary team at the renowned Four Seasons Hotel New York.  He became the hotels Executive Chef at the age of 29, becoming the youngest person to hold the title in the flagship property’s then 18-year history. During his tenure with Four Seasons Hotel New York, Zamora cooked for the world’s royalty and top celebrities.

Early in his career Anthony spent time at The Biltmore Hotel in Miami, a historic landmark property and renowned wedding destination in South Florida, where he was honored with the Florida Restaurant Association’s Award of Excellence in Hospitality. He holds a Bachelor of Science degree in Culinary Arts from Johnson and Wales University in Miami. Additionally, Anthony is active in the community guest lecturing for local universities, participating as an Advisory Committee Member at Le Cordon Blue College of Culinary Arts, as well as having served as a Board Member for the City of Pasadena Chamber of Commerce.

Anthony loves to cook for his family and friends. When Anthony is not in the kitchen, he enjoys spending time with his wife Anne, and their two children on the Chicago lakefront. Additionally, Anthony is an avid photographer and has even had his work published.

About The Langham, Chicago

The newest North American addition to Langham Hospitality Group’s luxury portfolio, The Langham, Chicago resides within the landmark, 52-story riverfront AMA Plaza (formerly IBM building) that is designed by the renowned architect Ludwig Mies van der Rohe. Offering 316 guest rooms and suites, this is the company’s first purpose-built hotel in the United States and the fourth property in the U.S. The Langham, Chicago features a 22,000 square feet Health Club housing Langham’s signature Chuan Spa; two restaurants, Travelle Kitchen + Bar, the Pavilion Lounge for afternoon tea; Langham Club with butler service, light meals and business facilities and 15,000 square feet of meeting space including the elegant Devonshire Ballroom. The hotel features a fine art collection with more than 150 pieces of distinctive artworks. Reservations for Langham hotels can be made online at www.langhamhotels.com. For further information about The Langham, Chicago, visit www.langhamhotels.com/chicago or dial 312-923-9988.

About The Langham Hotels & Resorts