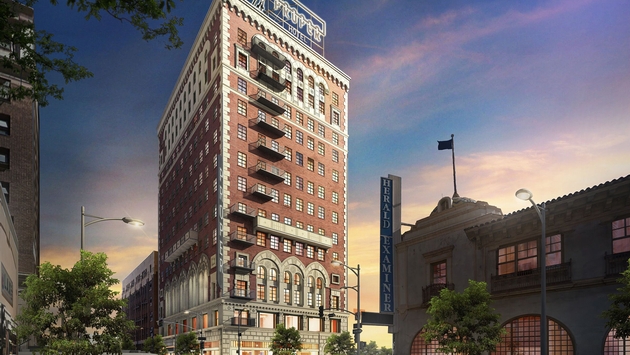 LOS ANGELES, CALIFORNIA (October 28, 2016) – The Kor Group, along with joint venture partner Stork/Alma Development Group, is proud to announce that the team has started construction on the Downtown LA Proper Hotel, a 148-room lifestyle hotel that will be managed and branded by luxury lifestyle operator Proper Hospitality. Financing provided by EB5 Capital, Bank of the Ozarks and Calmwater Capital. McGuire Builders is the general contractor and Kelly Wearstler is leading the interior design. The project, which was first announced in July 2015, is slated to open in Spring 2018.

Housed in the former YWCA building on the Historic Broadway Corridor, Downtown LA Proper Hotel will offer a new kind of high-end lifestyle hospitality experience that merges high touch and high tech, tradition and culture, energy and tranquility, world-class dining and a sense of place. Amenities will include a destination restaurant, a rooftop pool and lounge, and the renovation of some of the building’s historic, double-height spaces into unique suites and public areas. Most notable amongst these will be the 4th floor library with original ceiling frescos; the historic basketball court turned Hollywood screening room suite; and the indoor swimming pool suite.

“When we first discovered the building nearly three years ago, we were immediately drawn to its unique characteristics. We are thrilled to have finalized the capitalization and started construction, as we can finally begin to unlock the building’s full potential" said Frank Stork. "When choosing to stay at our Downtown LA Proper hotel, guests will be able to experience everything that Proper-branded hotels offer–the best in personalized luxury service provided in a timeless, beautifully restored building located along the hottest stretch of South Broadway,” added Brian De Lowe, President and Co-Founder of Proper Hospitality and Partner at The Kor Group.

This announcement comes on the heels of a series of other milestones for The Kor Group and Proper Hospitality. The much-anticipated Hollywood Proper Residences, a furnished and unfurnished luxury apartment building located in Kilroy Realty Corporation's Columbia Square, opened in June. San Francisco Proper Hotel, a historic adaptive reuse project similar to Downtown LA Proper, is on track for a May 2017 opening. The team also recently broke ground on Austin Proper Hotel & Residences (opening late 2018) and officially announced Santa Monica Proper Hotel (opening winter 2018/2019), both of which are financed in partnership with the Merchant Banking Division of Goldman, Sachs & Co.

About The Kor Group

The Kor Group is an international real estate investment and management company with extensive holdings and development experience in commercial real estate properties. Since its inception in 1999, Kor has acquired and developed hospitality, residential, and office assets valued in excess of $2.5 billion. Central to Kor’s investment strategy is value creation through distinctive design and branding.  By fusing creative design with an agile investment and development discipline, Kor has amassed a portfolio of high performing assets and has built a signature brand translatable across its properties. Kor has acquired, repositioned and managed over 14 million square feet of residential, mixed use, hotel, commercial office and retail space. Kor has over $1 billion in active developments – 1.4 million square feet in the acquisition, development, or construction stage, including ground-up development, value-add repositioning, and adaptive reuse. For more information, visit: www.thekorgroup.com.

Frank Stork and Channing Henry of Stork/Alma Development Group develop luxury and boutique lifestyle hospitality projects in Mexico, Costa Rica, and a variety of notable urban markets in the US.  The team takes an opportunistic approach to identifying underserved hospitality markets and building the operating, development, and financial strategies to realize those opportunities.  In addition to the Downtown LA Proper, its land holdings under development include 1,500 acres in Baja, Mexico and 400 acres in Southern Costa Rica.  Its partnerships include hospitality developments with the founders of Aman Resorts, Lomas Santa Fe Group, Luxury Frontiers, and Paces Properties. For more information, visit: www.storkdevelopment.com.

Led by the creators of the Viceroy Hotel Group, Proper Hospitality designs, brands, and operates high-end lifestyle hospitality experiences under the Proper Hotels and Residences and Avalon Hotels Brands. Each is a distinctive reflection of the vibrant community surrounding it, yet as a group they share a common belief in uncommon luxury, convenience of location, and world-class amenities provided by locally vetted innovators in food and beverage, technology, art, music, fashion, and wellness. Proper Hospitality currently manages Avalon branded hotels in Beverly Hills and Palm Springs and began rolling out the Proper brand with the opening of Hollywood Proper Residences in June 2016. Over the next few years, additional Proper Hotels and Residences are slated to open in other emerging urban innovation districts within dynamic U.S. cities, including San Francisco, Los Angeles, Austin and Santa Monica.  For more information, visit: www.properhotel.com.

EB5 Capital is a leader in the EB-5 immigrant investor industry, raising foreign capital for investment in job-creating real estate projects across the United States. EB5 Capital owns and operates a number of USCIS-authorized Regional Centers across the country, most notably in Washington, D.C., California, and New York, and has a portfolio of 19 current and completed projects. EB5 Capital has raised funds from investors in nearly 50 countries, maintaining a 100% project approval rate from the USCIS. It is one of only a handful of Regional Center operators that has returned capital to investors across multiple transactions.  For more information, visit: http://www.eb5capital.com.

Experience has made McGuire Builders, Inc. the industry leader in hotel renovation and construction since 1985.  The cornerstone of their success has been the longevity of their client relationships due to their innate understanding of the special needs and expectations of hotel developers and owners.  McGuire Builders has a keen focus on historic adaptive reuse projects throughout Southern California.  Recently completed high-profile projects include The Sheraton Grand Los Angeles at The BLOC at 7th & Hope, The Viceroy L’Ermitage in Beverly Hills, Sheraton Gateway LAX, The Westin Snowmass Colorado and The St. Regis Aspen Resort in Colorado.  With hospitality projects including over 35,000 guestrooms, restaurants, clubs and other hospitality repositioning projects, McGuire Builders offers sophisticated building solutions and an unwavering commitment to quality, schedule and owner satisfaction.  For more information, visit: http://www.mcguirebuilders.net