The Hype Behind Blockchain: What Is it and Why Is it Important to the Travel Industry?

Home/The Hype Behind Blockchain: What Is it and Why Is it Important to the Travel Industry?

The Hype Behind Blockchain: What Is it and Why Is it Important to the Travel Industry?

If you haven’t noticed Blockchain is one of the new catchphrases thrown around at every travel conference you go to, but it’s probable that most of those throwing the word around actually understand blockchain or how it could revolutionize the travel industry. The travel industry isn’t alone in its excitement over blockchain. The buzzword is making its way into the vocabulary of many industries with good reason. But the big question is how and why.

Wikipedia’s definition of blockchain “a growing list of records, called blocks, that are linked using cryptography. Each block contains a cryptographic hash of the previous block, a timestamp, and

transaction data. By design, a blockchain is resistant to modification of data.” Now I like to consider myself fairly technically savvy for having not any background but this really isn’t much help. I got timestamp but this doesn’t help me much and makes blockchain far more complicated than it needs to be. A layman’s definition of blockchain breaks it down into simpler terms. Essentially blockchain is a list of public records, also known as a public ledger, where transactions between parties are listed or stored. Each record, known as a ‘block’ within blockchain terminology, is secured using cryptography. The applications are vast and will have an impact on everything from voting to how you book your room reservations and flights. I have shared a great little video below to give an overview of the potential implications of blockchain technology.

The most critical piece to remember when it comes to blockchain is that it is a transfer of information that is decentralized, permanent, time-stamped and unalterable. The nature of the data recorded in the blockchain means that data is more secure, traceable and transparent.

Before we go deeper into blockchains applications in travel it’s beneficial to also have some background on the origination of blockchain. Originally blockchain rose out of cryptocurrency (we will dive deeper into crypto in future articles as there is no doubt this will make it’s way deeper into travel vernacular). Blockchain originated out of the need for more secure transactions in the financial world. Traditional financial systems are often believed to have shortcomings such as security, speed, cost, and the list continues. In comes cryptocurrency to shake things up. While viewed as somewhat unstable by traditional markets the value of cryptocurrency has risen 4500% since the beginning of 2017 (an aggregate stat of the 1400 cryptocurrencies available to buy). Blockchain rose out of a need for increased security and a way around traditional financial institutions. As Robo Advisors have allowed the average person access to enter the stock market, crypto has given the average person the ability to cut out the middle man in banking thus cutting costs and increasing security.

What does this leave the travel industry?

Blockchain offers a host of advantages for the travel industry ranging from how the industry distributes inventory and rates to security and speed in transactions. Amadeus has created a great video on blockchain which is below although noticeably absent in their overview is how it will transform distribution within the travel industry.

It should come as no surprise that the travel industry has some issues with security. Let me remind you of Marriott’s 2018 breach that disclosed 500 million guests info which has cost the company $138M in fines. Mind you Marriott is far from the only hospitality company that has had major security issues. Blockchain will allow for secure payment translations and identification.

Personalization in travel is another buzz word as of late and blockchain will also make this much more of a possibility. Keeping track of guest’s data and info and distributing loyalty points will become faster and more easily accessible with the use of blockchain, not to mention more secure. 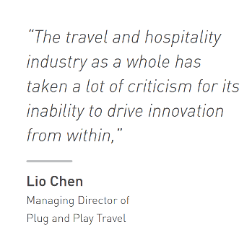 The tourism industry is estimated to be worth US$ 8.7 trillion annually, with sales expected to hit $817 billion in 2018. This industry by itself accounts for almost 10 percent of global GDP and moves millions each year. These are no small numbers and they come with hefty transnational fees. Any Director of Revenue can tell you the pressure they face in changing the mix to mitigate the commission and OTA costs. Our industry is infamous for its fragmentation and since the travel ecosystem relies on so many companies transferring data and money to one another it is prime for disruption by blockchain.

Hotels should be hungry for blockchain to step in, however, our industry is not only infamous for fragmentation it also has a reputation of its inability to innovate from within and can be resistant to new processes. Prior to Airbnb the first major innovation was 20 years ago when Expedia stepped into the market-disrupting the GDS and bringing about the onslaught of OTA’s. Blockchain potentially means that the fragmented system we are all accustomed to along with the high transnational fees associated with them could become a thing of the past or at the very least mitigated. As blockchain steps onto the scene and travel technology incorporated into our means of distribution third parties such as the OTA’s are at great risk of having their profit model disrupted. For more detail on this check out my article The rise and fall of the OTA’s.

Essentially blockchain will allow for hotels and airlines to bypass third-parties. Imagine an ideal scenario where hotels, airlines and tour companies had access to a blockchain database creating a platform where guests could book on their own bypassing Kayak, Expedia, etc. Users at both ends would ultimately benefit from reduced pricing and better flow-through. That might be the ultimate dream scenario for blockchain increasing security, allowing for increased personalization, avoiding high OTA margins and eliminating rate parity issues.

This dream platform could be possible down the road. Right now you are more likely to see travel tech companies utilizing platforms created for specific suppliers. Travalia is one example of a company using block chain for distribution, although not an ideal scenario for hotels as they are pulling mostly from FIT’s their platform does technically decrease fees to the consumer but is a blow to hotels parity as it currently stands. But this is just the start there are numerous companies out there. I am listing a few below but check out Investopedia and Plug and Play for more info

Winding Tree — Utilizes blockchain and smart contracts to work with travel companies to distribute and sell directly to customers. (keep your ears open for more on smart contracts as well)

The future of travel will be more secure, faster, and hopefully less fragmented as the industry begins to embrace technology and leave its fragmented past behind and creates an optimized infrastructure.

Robert Sudakow combines the skills of a strategic executive with a highly developed and diverse background in Revenue Management. A leader that is highly experienced, driven, and results-oriented with a strong track record of leading highly successful record-setting revenue generation strategies within large, geographically diverse and high- profile organizations that include Hilton, Stanford Hotels, and Ace Hotels. He possesses finely tuned communication and interpersonal skills that have allowed him to build and maintain strong working relationships with partners and stakeholders, lead diverse teams, and build consensus across all organizational levels, that have all been integral in driving strong business growth.

Sudakow’s path into the hospitality industry was unexpected, but one that has led to great success in the industry. Graduating from the University of Rochester with Degrees in Molecular Genetics and Comparative religions he graduated having two papers published in the Journal of Pharmacology and went on to work on archeological sites for 5 years after graduating. Upon returning to the states Sudakow found his way into hotel revenue management starting his career under Destination Hotels and Resorts.

In the 15 years since his entry into hospitality, Rob Sudakow proven his ability to increase market share and drive bottom line revenues through savvy, technological understanding, and data analysis to foster a solid revenue generating culture among leaders and peers. He carries his passion and drive into his personal life serving his community and continuing his education. Sudakow has served as the president of the Norther California Chapter of HSMAI, and works closely with AIDS LifeCycle, Bright Pink and Curry Senior Center. Additionally, he continues to broaden his horizons by obtaining certificates in Disruptive Strategy from Harvard Business School as well as an Asset Management Certificate from Cornell. His passion lies in being able to make a personal impact on both productivity and people. Most recently Robert Sudakow has been accepted into The Climate Reality Project training with Vice President Al Gore and other world climate scholars to work at the local level to drive change.