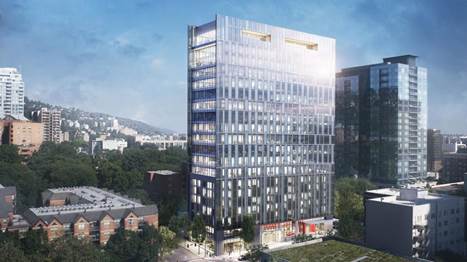 Seattle, WA, May 30, 2018 — The Hotel Group (THG), a national hotel management and investment company, announced that they were selected to provide services for the Radisson RED Downtown Portland project. In its capacity as asset manager, THG will act as the owner’s representative on behalf of owner and developer, Walter Bowen of BMP Real Estate Group. The property is currently under construction and is expected to open this Fall as the second Radisson RED in the United States.

The 180-room and suite hotel is part of the 20-story mixed-use Broadway Tower in South West Portland’s Central Business District. The Radisson RED Downtown Portland will feature a lobby restaurant and bar with seating for approximately 75 guests and a full-service kitchen with catering abilities and twelve beers on tap. Amenities will include a fitness center, two outdoor decks, and three conference rooms with a pre-function space for events up to 250 people. The hotel will share a two-story main lobby with Starbucks. Office tenants, located above the hotel, will include National Fortune 500 companies and local corporations. The complex will feature a 247-stall parking garage catering to visitors, office tenants, and hotel guests.

“With Radisson RED, lifestyle is the inspiration, and what better place to be inspired than Portland, a city teeming with art, culture, history, and cuisine,” stated Douglas Dreher, President, and CEO of The Hotel Group. “We look forward to collaborating with the brand, owners, and the Portland community to bring this innovative hotel to life.”

The Radisson RED Portland is located at the confluence of the Arts and University Districts and is close to Portland’s Waterfront Park and within a few blocks of Portland’s Streetcar and Max light rail. Pioneer Square and Pioneer Square Mall, as well as Portland State University and City Hall, are all within walking distance. Providence Park, home of the Portland Timbers Major League Soccer Team, the Moda Center, Home of the NBA’s Portland Trailblazers, and the Oregon Convention Center are a short Max Light Rail ride from the property.

About The Hotel Group

The Hotel Group is a nationally recognized leading hotel management and investment company. Since its inception in 1984, THG has managed and/or owned over 125 properties in 25 states representing over 20 brands, directed the design and construction of nearly 50 new hotels, and completed the acquisition of nearly $200 million in private investment through the Hotel Group Opportunity Funds. For more information on THG and the services it offers, visit http://www.thehotelgroup.com/.