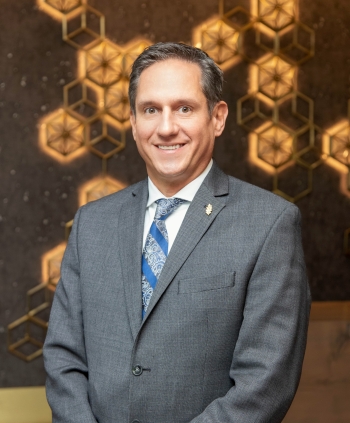 LAKE FOREST, IL (August 2022) – The property that has fast made a name for itself as the premier North Shore travel and leisure destination since their highly anticipated opening in Spring of 2021, The Forester Hotel, 200 N. Field Dr., is proud to announce the appointment of Dino Simoncelli as General Manager of the picturesque Lake Forest property managed by Janko Hospitality. An Illinois native hailing from Downers Grove, Simoncelli’s passion for hospitality has been unparalleled throughout his career, earning him impressive leadership roles including his most recent position as the General Manager and Chief Operating Officer of the Standard Club of Chicago.

Simoncelli’s career in hospitality began after earning his bachelor’s degree from Southern Illinois University, serving as the Front Desk Manager for the Marriott Suites Downers Grove and quickly blossoming thereafter. Simoncelli has served in a variety of roles key to perfecting the guest experience including Front Office Manager at the Marriott Schaumburg and Renaissance Oak Brook, Operations Manager at the Hilton Sea World Resort, Radisson Chicago Northbrook and Wyndham Glenview Suites and Assistant General Manager at Hilton Resorts and the Union League Club of Chicago. Through these experiences, Simoncelli was twice nominated for Manager of the Year by the Illinois Hotel and Lodging Association.

“We could not be more ecstatic to welcome such a professional, passionate and driven leader to the team as Dino Simoncelli,” said Micaela Haas, Area General Manager for Janko Hospitality. “Since opening the property, we’ve worked to serve at the highest level for our guests and Lake Forest neighbors, and we are thrilled to be able to appoint a leader with a drive to do the very same for years to come.”

A father of three, Simoncelli serves as a member of the Knights of Columbus and enjoys cooking and coaching his sons in baseball. Simoncelli is especially drawn to outdoor activities, fitting in perfectly with The Forester Hotel’s roots in an appreciation for the outdoors, based upon the city’s motto “Naturae et Scientiae Amor,” which translates directly to “Love of Science and Nature.”

About The Forester Hotel

The first boutique-inspired Hyatt Place hotel in the world, The Forester Hotel, located at 200 N. Field Dr., Lake Forest, opened in April of 2021. A Janko Hospitality entity, The Forester Hotel is a chic destination for both business and personal adventures to bloom at a unique crossroads of science and nature, just a short distance from Lake Michigan, Lake Forest College, Conway Business Park, Halas Hall and other attractions. The 156-room property flourishes with several amenities, a trailblazing chef-driven restaurant, extensive event space and more. Intended for locals and visitors to explore the beauty of everything around them, the hotel offers the comfort Hyatt is known for with a special local flavor, emphasizing the Chicago North Shore’s native flora and fauna throughout the property’s design and offerings. For more information, please visit www.TheForesterHotel.com.

Founded in 1999, Janko Hospitality, a subdivision of the Janko Group, is a Chicago-based operator of upscale full-service, extended-stay and select-service hotels throughout the Midwest. The dynamic organization, since its inception, has managed brands within the Marriott, Hyatt, Hilton, and IHG brands, with two new hotels in development: The Forester, a Hyatt Place Hotel and the Holiday Inn Express & Suites Lockport. Hotel Business named Janko Hospitality a “Top 100 Management Company” in 2019. Janko Hospitality is a growth company focused on expansion through strategic acquisition, development, and third-party management. With a passion to deliver exceptional and memorable guest experiences, the hospitality group has a proven track record of solid financial performance, honorable community involvement, and an unwavering commitment to quality. Its family-centric culture ensures an excellent experience for all guests, associates, and owners. To learn more, visit www.jankohospitality.com