The Five Megatrends That Will Impact the Middle East’s Travel and Tourism Industry: PwC Report

The Five Megatrends That Will Impact the Middle East’s Travel and Tourism Industry: PwC Report 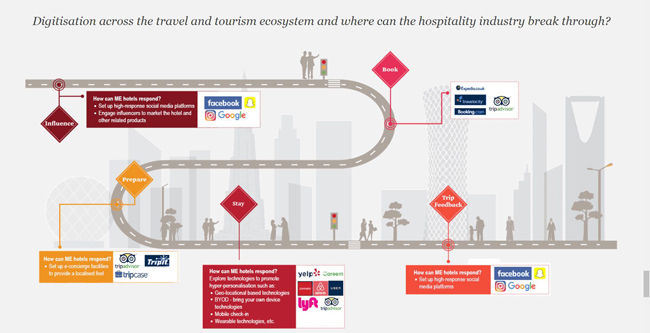 The global megatrends are set to have a profound and disruptive effect on the Middle East travel and tourism industry, says a new PwC report. According to PwC, the five global megatrends that are widely believed to be shaping the future of our world are: demographic shifts and social change, a shift in global economic power, accelerating urbanisation, climate change and resource scarcity, and the rise of technology.

With the Middle East leading the emerging market population boom over the past decade, demographic and social change is a key issue that the industry will need to tackle, and tackle fast, the firm says. The region is young, with 40% of its people under the age of 25; and its population expected to rise by almost 50% over the next 25 years. The travel and tourism industry today finds itself at the helm of a multi-faceted demand shift driven by these generational and demographic changes. Whilsts historically designed to cater to middle-aged business and leisure tourists from advanced economies, it must today transform itself to cater to a wider variety of visitors, age groups and backgrounds. This change from what the report calls "Generation Z and the Millennial to the Silver tourist" – brings with it numerous opportunities and challenges, mainly because of the polarising demands it requires. It will bring forth a new age of innovation, which the report addresses. From targeted rebrandings and proactive actions to attracting new types of travellers whilst retaining existing customers; overhauling traditional marketing concepts and embracing the power of social media; to embracing a digital era.

The shift in global economic power has placed the Middle East at the center of many of the world's fastest growing markets, most important of which are India and China. As this handing over of the torch from advanced to emerging economies continues, the region, which finds itself at the epicenter of these shifts, will have to take proactive steps to benefit from these. Dubai in particular has leveraged that position to turn itself into a global hub for aviation, tourism and logistics. Through Dubai International Airport, the city has also turned itself into a key link, connecting the economies of the East and the West and placing the UAE within a four-hour flight of 40% of the world's population. Opening itself to mass markets such as China and India, the development of large-scale tourism projects, the trim down of corporate travel budgets during trying periods and the consumer behavior of the millennial traveler, it is important for Dubai and other major cities in the region to address the skew of its hotel supply towards the luxury hotel sector and open its door to welcome more budget-friendly mid-market, i.e. 3 and 4 star hotels, into the mix.

The report cites the steps which countries across the region will need to take to further take advantage of that enviable position and central location on the West-East corridor. It argues that emerging markets are indeed set to overtake developed mones as both tourism and hospitality destination but also as providers of key customers.

Accelerating urbanisation is impacting the Middle East like no other place in the world, making it in fact the most highly urbanised on earth. And with new cities under construction, this level continues to rise – making it a struggle to develop sufficient infrastructure to cope with this population explosion. However, the years of skyrocketing population expansion are now almost behind us, focus will have to shift today to making urban spaces, including hotels, function optimally. This, PwC says, reflects a $4 trillion opportunity of projects planned or under construction in the Middle East and North Africa. A majority of the countries within the GCC attract urban tourists; wherein the main city is the targeted destination for the traveler. Dynamic development of urban tourism is strongly dependent on economic growth, technological growth and increased air connectivity; all of which are positive factors for the GCC region. Tourism offerings usually vary from retail, leisure and wellness, cultural, theme parks, sun and sand but are usually concentrated "in-the-city."

Whilst this too presents considerable opportunities for the region's tourism landscape, governments and business in the region will need to prepare for the challenges ahead: constrained capacity and finance for infrastructure delivery, investments in service provisions, proper planning and resource scarcity, among others.

Meanwhile, climate change and resource scarcity is today more than ever, a pressing issue for the Middle East. Water is and will remain a significant issue for the region over the coming decade, with the GCC already relying on 70% of its water and water consumption being forecast to grow by one-third by 2020. In addition to water scarcity, the Middle East is of course vulnerable to warmer summers – the region will therefore need to implement some critical control measures in the form of a sustainability roadmap with clear targets and mitigation strategies, says PwC.

Technological breakthroughs, however, could be part of the answer to these issues, but the disruption that digitisation is bringing to today's travel and tourism industry will require new skills and a shift in strategies. The Middle East travel and tourism industry has many of the right ingredients to benefit from these technological breakthroughs, with young, tech savvy populations across the spectrum and smartphone penetration in the GCC amongst the highest in the world, reaching 78% in the UAE and 77% in Saudi Arabia. Digitisation will affect the entire value chain of the travel and tourism industry; from influencing traveling decisions, to collecting feedback and improving the delivery of their products and services. A business strategy, befit for the digital age, will have to be the order of the day for the industry.

"Over the past decade, the Middle East has developed into a global hub for tourism and leisure, attracting visitors from all over the world. However, new winds of change will require further transformation within the region's travel and tourism industry. From changing the way the industry markets its products, to completely overhauling traditional concepts, our report aims to offer insight and solutions for the hospitality and tourism industry to survive and thrive in this era of "new normal".

At PwC, our purpose is to build trust in society and solve important problems. We're a network of firms in 157 countries with more than 223,000 people who are committed to delivering quality in assurance, advisory and tax services. Find out more and tell us what matters to you by visiting us at www.pwc.com.

PwC refers to the PwC network and/or one or more of its member firms, each of which is a separate legal entity. Please see www.pwc.com/structure for further details.