The Boss Can Kill the Customer Service Buzz

The Boss Can Kill the Customer Service Buzz 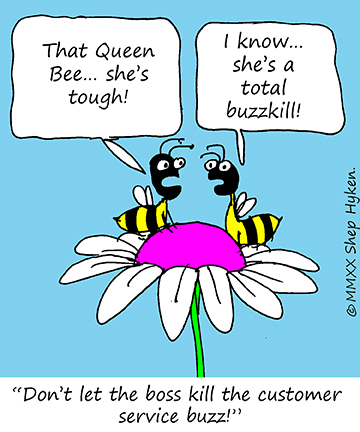 Back in my high school and college days I worked at a gas station. We were a self-service station, so our role was that of cashier more than anything else.

One very cold morning I noticed an elderly woman drive into the station. She was probably 80 years old. When I say it was a cold morning, I mean it was record-breaking cold.

I walked out to her car and asked if I could fill her tank with gas for her so she could stay in her warm car. She was happy to stay warm and I was happy to help her. Once her tank was full, she paid me, I thanked her, and she drove off.

I hustled back into the warm building where my manager asked, “What do you just do?”

I thought it was a strange question since it was obvious, but I said, “I filled that woman’s car with gas.”

He said, “Son, this is a self-service gas station. Now she’s going to expect that the next time she comes back.”

I responded by saying, “I hope she does come back instead of going to the station across the street or the one on the opposite corner.”

He gave me an angry look and walked away.

I was young, but I wasn’t stupid. Simply put, it was the right thing to do. If she came back on another cold day, I would do it again.

There are two big lessons here. First, we all have two responsibilities: do the job we were hired to do and also take care of the customer. I may have been a cashier, but I also knew that my job, beyond collecting money, was to take care of my customers.

Second, a boss can kill the customer service buzz. I believed in taking care of my customers so strongly that my boss couldn’t, even with his anger and negativity, change my mind about this. Unfortunately, if my boss talked that way to most of the other employees I worked with, they would be scared to death to go out on the drive and help a customer.

Quite often, if a company is considered a customer service laggard, it is because of its leadership and management. One of the most important ways a leader can foster a customer-focused culture is by modeling that behavior—in other words, by treating employees how they want the customer treated. In addition, leadership must empower good employees to take care of the customer the best way they see fit. If it’s wrong, coach them on how to do it right. If it’s right, coach them to do more of the same. No matter what, don’t kill the customer service buzz!

The Difference Between Good and Great
Cendyn Announces Partnership With OpenTable to Integrate Hotel Reservation and Dining Data Into a Unified Guest Profile
Maestro All-In-One PMS Solution Provider Rolls Out the Red Carpet at HITEC
The True Heart of Hospitality Is Human Kindness, Especially to Strangers
Cloudbeds Acquires Whistle, Moves to Solve Friction in Guest Journey
Virgin Hotels Edinburgh Partners With InnSpire to Offer Cutting-Edge Guest Experience, Casting and Contactless Service Capabilities
Good Intentions Can Be More Important Than Perfection
Another Lesson on How to Handle Angry Customers: Don’t Smell the Milk
How to Win Guest Loyalty for an Eco-Conscious World
Beekeeper Named ‘Best Employee App’ for Resorts World Las Vegas Deployment
The Top 5 Drivers of a Successful Company Service Culture
Clairvoyix and Fetch Partner to Bring On-Property Guest Communication and Incident Reporting to The Wallace
A Lesson from Michelangelo: Details Matter
Hotel Sales: When Product, Process, Place, and Price Are the Same, People Make the Difference
Feedback Narcissism
Is It Okay to Call a Customer or Employee Honey?
The Title and Role of Revenue Manager Should Be Transitioned to “Revenue Generation Manager”
Answer the Question the Right Way
Would You Rather Clean a Toilet Than Call Customer Support?
Everyone Deserves A Compliment