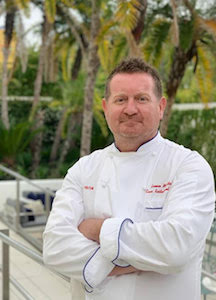 BEVERLY HILLS, Calif. – May 30, 2019 – The Beverly Hilton is pleased to announce the appointment of Chef Simon Moulden as Executive Chef of CIRCA 55. Drawing upon three decades of culinary experience earned at luxury hotels and restaurants worldwide, Moulden will oversee the culinary development, menus and operations for the hotel’s signature restaurant, CIRCA 55.

“We are thrilled to welcome Chef Moulden to The Beverly Hilton family,” said General Manager, Sandy Murphy. “Chef Moulden is incredibly talented, and we look forward to seeing how infuses his global perspective into fresh culinary creations.”

Moulden comes to The Beverly Hilton from the MGM Resorts International in Las Vegas, where he served as Executive Sous Chef for dining outlets spanning three hotels – Mandalay Bay Resort & Casino, Delano and Four Seasons Hotel – overseeing the individual hotels as well as large-scale events. Prior to that, Moulden was Chef De Cuisine at the Viceroy L’Ermitage in Beverly Hills, Calif. and previous to that, spent nearly two decades in his native Australia, working for the De Olivieras restaurant group among others before opening his very own restaurant, The Yard on Australia’s Gold Coast. Moulden began his culinary career as Chef De Partie at the Savoy Hotel in London, England where he worked under renowned restaurateur, Michelin-starred chef and television personality, Marco Pierre White.

Among his many culinary inspirations, Moulden cites his time working under Pierre White, as well as the eight years he spent traveling around the world, cooking his way through over 20 countries throughout Europe and Asia. Particularly inspired by his time spent in Greece and the Basque region of Northern Spain, Moulden will infuse a Mediterranean spirit into the new menus at CIRCA 55, placing a larger emphasis on shared plates and continuing to source California’s foremost seasonal produce.

“It is an absolute honor to be taking the helm at CIRCA 55,” said Moulden. “I am looking forward to combining the timeless elegance of the Beverly Hilton with my modern approach to Mediterranean fare, bringing a fresh culinary concept to the iconic hotel.”

For more information about The Beverly Hilton, please visit www.beverlyhilton.com or call (310) 274-7777.

About The Beverly Hilton

Opened in 1955 by distinguished hotelier Conrad Hilton, The Beverly Hilton, a Forbes Four-Star hotel, is owned by the Los Angeles-based, Oasis West Realty, LLC and managed by Hilton (NYSE: HLT). Nestled at the crossroads of the iconic Wilshire and Santa Monica Boulevards, the hotel combines the excitement and entertainment of Hollywood with the prestige of Beverly Hills. The 569-room hotel features 101 suites including nine private luxury suites within The Penthouse Collection. With more than 60,000 square feet of indoor and open-air event space, The Beverly Hilton boasts the most technologically advanced meeting space of its kind in the country. The hotel’s renowned International Ballroom plays host to glamorous annual events including the Golden Globe Awards Show, Oscar Nominee Luncheon, Pre-GRAMMYs Gala, and the Milken Institute’s Global Conference. The legendary Aqua Star Pool is Beverly Hills’ largest pool and is the setting for numerous recognizable photo shoots. Signature restaurant, CIRCA 55, entices guests with locally-sourced cuisine in a stylish setting overlooking the pool and brand-new health and fitness facility, Upgrade LabsTM, delivers more than 20 different technologies dedicated to improving mental and physical performance and recovery. For more information, please visit www.beverlyhilton.com or call 310.274.7777

For 100 years, Hilton Hotels & Resorts has set the benchmark for hospitality around the world, providing new product innovations and services to meet guests' evolving needs. With more than 585 hotels across six continents, Hilton Hotels & Resorts properties are located in the world’s most sought-after destinations for guests who know that where they stay matters. Hilton Honors members who book directly through preferred Hilton channels have access to instant benefits. Begin your journey at www.hilton.com, and learn more by visiting newsroom.hilton.com/hhr and following Hilton Hotels & Resorts on Facebook, Twitter, and Instagram.