By Robert Mandelbaum and Keval Rama

Lodging is a cyclical industry meaning that it passes over time through four distinct phases: peak, contraction, trough and expansion. Most industry participants believe that 2007 was the previous peak of the current business cycle following six years of expansion from the 2001 industry recession. According to STR, the demand for lodging increased for six consecutive years from 2002 through 2007, while average daily room rates (ADR) grew in excess of 4.5 percent during the latter four years. Per CBRE Hotels’ Trends® in the Hotel Industry survey, gross operating profits (GOP) were growing at a 10 percent annual pace leading up to 2007.

After 2007, the industry went through a pronounced period of contraction. From 2007 to 2009 the national occupancy level dropped 13.2 percent, ADR fell 5.8 percent, and the average GOP per property decreased a staggering 29.4 percent. Clearly the trough of the current cycle occurred in 2009.

The strong and extended period of expansion that the U.S. lodging industry has enjoyed since 2009 has been well documented. Lodging demand has increased each of the eight years from 2009 to 2017, enabling U.S. hotels to achieve new record levels of occupancy each of the past three years. After declining slightly in 2010, ADRs have also increased year-after-year through 2017, and are now up 28.8 percent from 2009. At the bottom-line, GOP is on an eight-year run of growth, and in 2017 was 73.4 percent greater than 2009 percent levels.

Given such strong growth in the major industry metrics, can U.S. hotel owners and operators comfortably assume that their lodging assets have recovered?

In general, recovery is defined as the period in the cycle when the industry returns to levels of performance prior to the contraction period. Given the strong and extended period of expansion from 2009 to 2017, it has been assumed that the U.S. lodging industry has “recovered”. However, depending on how you analyze the data, this may, or may not be the case.

To determine which segments of the U.S. lodging industry may have recovered to 2007 peak levels of performance, we analyzed revenue, expense, and profit data from CBRE’s Trends® in the Hotel Industry database of hotel operating statements from thousands of properties across the nation. Same-store samples of data for six different property types were used to mitigate the bias created by changes in the profile of hotel products in the industry over the years. The data was analyzed using both nominal (stated-year) dollars, and real (inflation adjusted) 2017 dollars.

Using nominal dollars, the average hotel in the Trends® study sample achieved a total operating revenue level of $72,020 per available room (PAR) in 2017, 17.1 percent greater than the $61,525 PAR level achieved in 2007. Concurrently, GOP levels were $27,551 PAR in 2017, 19.8 percent more than 2007 profit levels. These data imply that on a nominal basis, U.S. hotels have “recovered”. In fact, on average, the nominal recovery occurred in 2014 when the properties in the sample achieved revenue and profit levels superior to 2007 standards.

Not all property types achieved nominal recovery at the same pace. Full-service, limited-service, and extended-stay hotels were able to exceed previous peak levels of revenue by 2013, while resorts, all-suite, and convention properties lagged until 2014. All property types surpassed 2007 GOP levels in 2014, except convention hotels which did not do so until 2015.

From 2007 through 2017, limited-service and extended-stay hotels enjoyed the greatest nominal growth in total operating revenue of 23.4 and 22.0 percent, respectively. Unfortunately, these property categories were unable to translate the strong recovery on the top-line to the bottom-line. During the 10-year period, GOP levels grew by just 12.2 percent on a nominal basis at limited-service hotels and 20.4 percent at extended-stay properties. The majority of limited-service and extended-stay hotels in our sample are chain-affiliated. Therefore, with such strong revenue growth, it appears that the franchise-related costs (which are tied to changes in revenue) had the greatest influence on limiting flow-through at these two property categories.

Resorts achieved the greatest nominal gain in GOP during the study period. They converted an 18.5 percent increase in revenue to a 26.0 percent gain in profits. Full-service and all-suite hotels also achieved GOP growth greater than revenue growth during the 10-year period. By reducing service levels at food and beverage outlets, combined with the relative ability to control labor costs (compared to limited-service and extended-stay hotels) operating efficiencies have been enhanced throughout these property types.

Convention hotels have been lagging in both nominal revenue and profit growth. Operators at these hotels took advantage of the cost control measures previously mentioned, and limited operating expense growth to just 12.6 percent over the past 10 years. Unfortunately, convention hotels experienced the least growth in revenues (11.3%) and, therefore, GOP at these large properties are up just 9.0 percent on a nominal basis from 2007.

For the owners and operators of U.S. hotels, the recovery story changes significantly when analyzing the 10-year trend in revenues and profits using real (inflation-adjusted) dollars. For this analysis, we converted the performance data to 2017 constant value dollars. Real changes in revenues and profits are significant to owners, operators and investors looking to achieve income and returns greater than the pace of inflation.

Using real dollars, the average property in the Trends® sample was still 0.6 percent behind the $72,455 PAR in total operating revenue achieved in 2007. Fortunately for hoteliers, operating expenses on a real dollar basis declined by 2.2 percent from 2007 levels, thus allowing for a slight 2.1 percent increase in GOP. Given this limited real gain in profits, it is not surprising that the average hotel in the Trends® sample did not achieve real profit recovery until 2017.

Four out of the six property-type categories have also been able to provide their owners and investors with real growth in profits from 2007 through 2017. Resort hotels achieved the greatest gains in real profits (7.4%), followed by full-service (3.3%), and all-suite (3.3%) properties. Extended-stay hotels, which enjoyed a relatively strong real gain in revenue were only able to achieve a real growth in profits of 2.3 percent.

Not So Real Over The Long-Term

If you were fortunate to enter the lodging industry after the 2009 industry recession, then you most likely have enjoyed the benefits of the significant and extended period of expansion. However, if you have been in the industry throughout the current cycle, then the revenues and profits that have been generated by your investment over the past 10 years may not have been as significant as the nominal changes suggest. 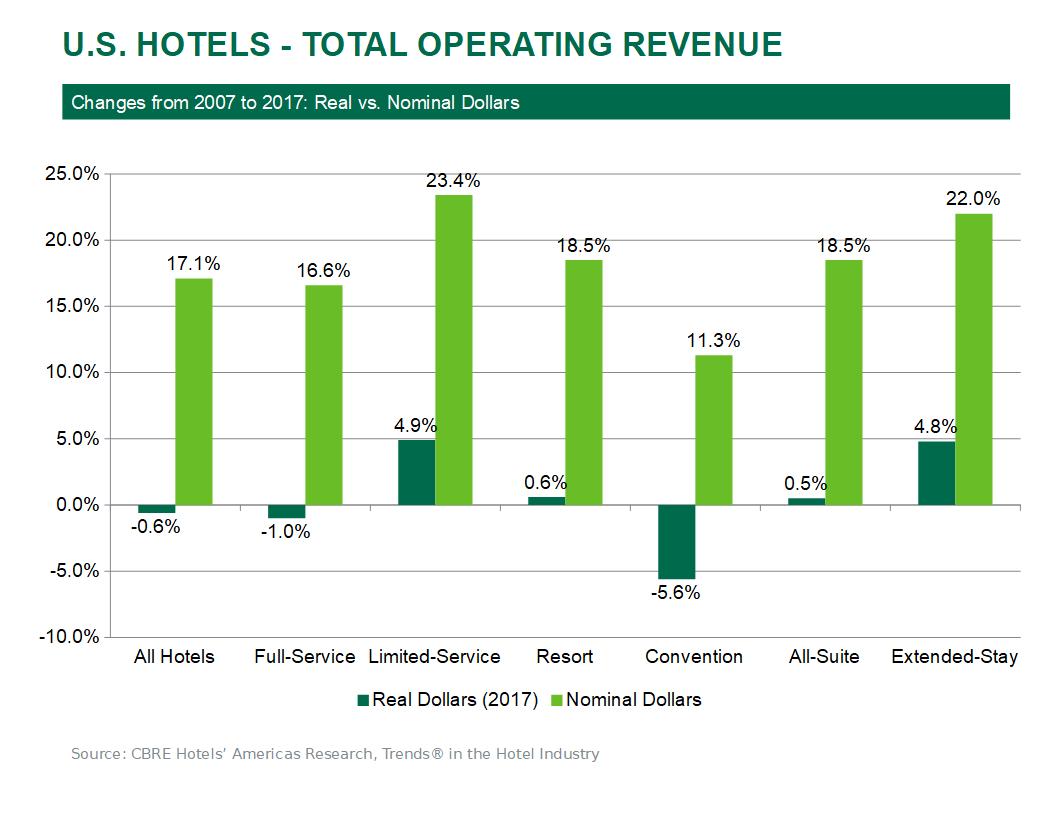 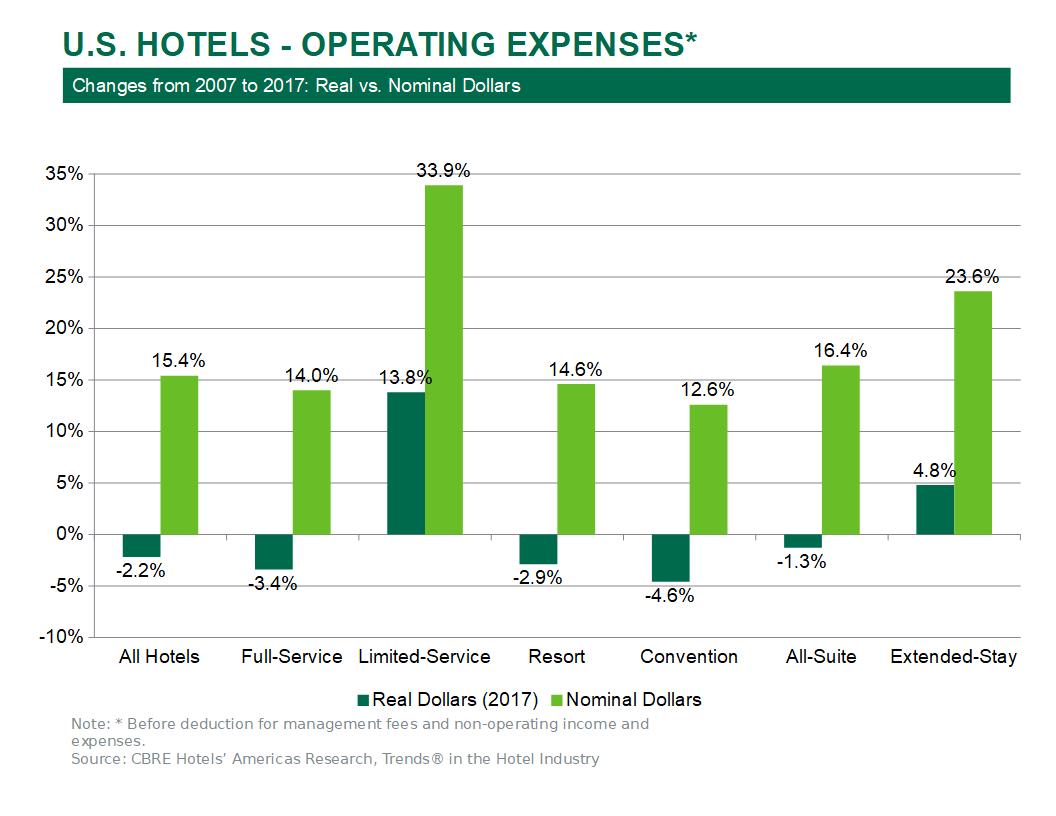 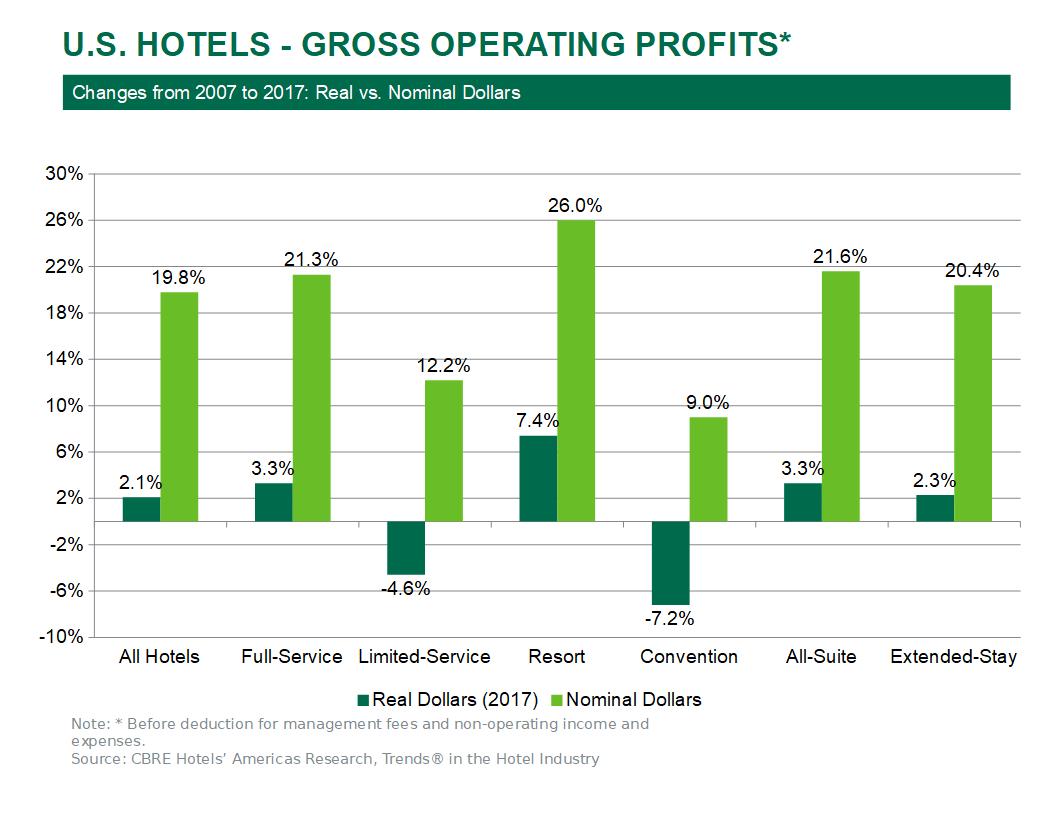 Robert Mandelbaum is the Director of Research Information Services for CBRE Hotels’ Americas Research.  Keval Rama is a Research Analyst with CBRE and a member of the Class of 2021 at the Cornell University School of Hotel Administration.  To purchase a copy of the 2018 edition of Trends® in the Hotel Industry, please visit https://pip.cbrehotels.com/store, or call (855) 223-1200.  This article was published in the August 2018 edition of Lodging.