American workers left a record number of vacation days on the table last year—768 million days, up 9% from 2017—according to new research from the U.S. Travel Association, Oxford Economics and Ipsos.

Of the unused days, 236 million were forfeited completely, equating to $65.5 billion in lost benefits. More than half (55%) of workers reported they did not use all their allotted time off. 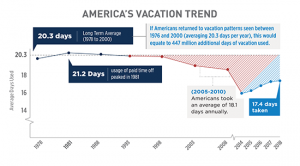 The latest study also discerned a broader economic cost. Over 80% of American workers say it is important to use their time off to travel, the report found, but they do not actually take the trip. If Americans used their time off to travel, the economic opportunity amounts to $151.5 billion in additional travel spending and two million American jobs.

Reasons such as cost, difficulty in getting away from work and air travel hassles were cited in the study as being top barriers to travel.

“When I see how many vacation days went unused, I don’t just see a number—I see 768 million missed opportunities to recharge, experience something new and connect with family and friends,” said U.S. Travel Association President and CEO Roger Dow. “However, it’s an unfortunate truth that cost is the top barrier to travel. Despite the financial challenges of traveling, there are affordable alternatives to explore America—whether it’s a drive up the coast or a day trip to a neighboring town.”

Consistent with previous U.S. Travel reports, the study shows that vacation “planners” use more of their time and take longer and more impactful vacations than “non-planners.” Nearly half (46%) of American households do not take the time to plan their vacations and lose out on a multitude of benefits:

“Year after year, the evidence shows that Americans who plan for their vacations at the start of the year take more time off to travel and are healthier in many aspects of life,” Dow said. “That’s why National Plan for Vacation Day continues to be so important for our industry to encourage employees to plan ahead for their time off and travel to see more of America.”

For additional data and factsheets on National Plan for Vacation Day, click here.

Methodology: Ipsos conducted an online survey January 22- February 3rd, 2019 with 1,025 American workers, age 18+ who work more than 35 hours a week and receive paid time off from their employer. These data were weighted and scaled.

U.S. Travel Association is the national, non-profit organization representing all components of the travel industry that generates $2.5 trillion in economic output and supports 15.7 million jobs. U.S. Travel's mission is to increase travel to and within the United States. Visit www.ustravel.org.