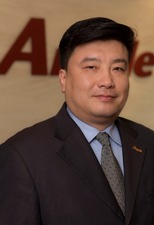 Frankfurt am Main, 6 December 2016 – 47-year old Louis Liu has been appointed new General Manager of the Hotel Maximilian (managed by Steigenberger) in Beijing. Mr. Liu, who was born in the city, is able to look back on more than twenty years of management experience both nationally and internationally. During this period, he has held executive positions at various 4-star and 5-star hotels.

Because he has worked at a range of different properties in China and overseas, he brings both a great deal of expertise and a good degree of familiarity with the local hotel market to the table.

“Louis Liu is an experienced hotelier with an excellent knowledge of China,” said Puneet Chhatwal, CEO of Deutsche Hospitality. “He will help us to continue to enhance our reputation in this country.”

Deutsche Hospitality has been represented in China by the Hotel Maximilian (managed by Steigenberger) in Beijing since November 2014. The IntercityHotel Quingdao opened for business in October 2016. Four further hotels are planned to open within the next years in Heihe (2017), Hainan (2018), Chongqing (2018) and Taizhou (2020).

Deutsche Hospitality is an umbrella brand which brings together three separate hotel brands – Steigenberger Hotels and Resorts, Jaz in the City und IntercityHotel. The Deutsche Hospitality brand encompasses more than 120 hotels, 25 of which are at the development stage. The portfolio includes 56 Steigenberger Hotels and Resorts and 41 IntercityHotels. The first Jaz Hotel opened in Amsterdam in November 2015.