Smile and the World Smiles With You—Unless It’s Fake

Smile and the World Smiles With You—Unless It’s Fake 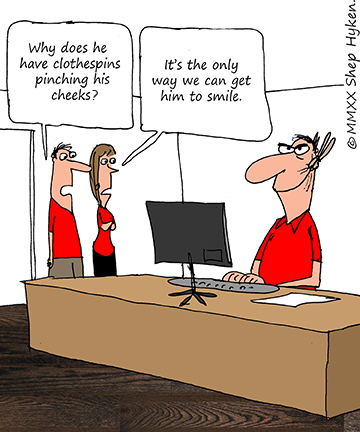 One of our faithful Shepard Letter subscribers emailed me a story. He was at a store, and the employee was friendly and engaging. But when he saw her later—when she was off duty—she acted indifferent toward him, almost rude. She wouldn’t even smile, which made him wonder, “Shouldn’t people greet you as warmly outside of their work environment as they do while on the job?”

When you hire someone for a job, you should understand their personality. Do they come to the job with the positive attitude you want your customers to experience? Or do they have to “fake it”? The old cliché of “hire for attitude and train for skill” comes to mind, but I think it’s more than that. You do want to have someone with the right attitude, but more importantly, they need to understand and fit in with the culture and personality of your organization.

Just hours after I read this subscriber’s story, I was at the airport standing in front of the check-in desk at the gate. The gate agent was busy pecking away at the computer’s keyboard. He never once looked up at me. (Was I invisible?) He then left to go down to the plane. He came back a few minutes later and continued to work, never once looking at me or the other passengers that were now lining up behind me. Finally, I asked him, “Are you the gate agent working this flight?” He responded, “Yes, but this gate is closed until one hour before the flight.”

Good explanation… but it would have been nice for him to tell me that five minutes earlier. A nice friendly smile along with that explanation would have gone a long way. I walked away and found another agent who was not “officially” on duty or working my flight, but who was almost overzealously willing to help me. She was very friendly, so I complimented her. I then told her the story about the grumpy agent who wouldn’t even acknowledge me. I could tell that frustrated her, and she confided in me that he always comes to work with a sour attitude. She even said, “I can’t imagine why he keeps this job. He must hate it—having to be friendly to everyone. It’s not who he is.”

When it comes to hiring people who have to work with others, especially customers, trust me on this. If the job requires friendliness and an outgoing personality, you don’t want to hire someone who has to fake it. It’s just a matter of time before they flip back to a different personality. They may want to put forth their best effort, but if it really isn’t part of their personality, they will eventually revert back to who they really are. People can only adapt for so long.

It’s important to remember that customers don’t know whether an employee is on-duty or off-duty. But they do know how they are treated. Your best people should have the people-focused gene. It’s about who they are all the time, not just when they are at work and on duty. That’s who you want working for you—and that’s the company reputation you should strive for.

Batteries Included
Your Emergency Response Plan — Be Prepared
Expected Global Tourism Boom in 2020 Is Fueling the Need for Voice Translation Technology at Check In and Beyond
Making the Minibar Profitable for the New Decade
How To Help Your Front Desk Colleagues Overcome “Compassion Fatigue”
Volara Named ‘Best Voice Activated Tech Product’ of 2020 by HotelTechReport
Tourism Satisfaction: Importance, Measurability & Impacts
New Year’s Reflections: Celebrate Your Accomplishments
End on a Positive Note
How to Achieve 50% Direct Sales for Your Hotel (or More …)
20 Ways To Create An Amazing Customer Service Experience In 2020 (Part Two)
Uptown Suites Adopts Fuel’s Interactive Mobile App Across Eight-Property Hotel Portfolio
Trends in Training: Simulating Engagement With Tech
4 Useful Positioning Strategies for Your Independent Hotel
20 Ways to Create an Amazing Customer Service Experience in 2020 (Part One)
What Does the Expectation Economy Mean for Hoteliers in 2020 and Beyond?
You Shouldn’t Have Told Me That
ResortPass Sees Record Growth Fueled by Experience Economy and Redefines Guest Revenue Opportunities for Hotels & Resorts
LVMH Hotel Management’s Cheval Blanc Randheli Partners With InnSpire to Adopt Luxury Guest Connectivity Platform
Auditing the Auditors: What Happens When Quality Assurance Morphs Into PR & Marketing?